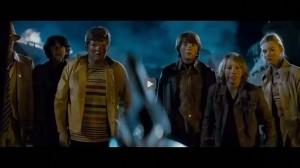 We’re here at that time again.  The end of the year.  And thus, here is my list of my top 10 movies of 2011.  Now these are films I saw in the theatre or at home that came out in the year 2011.  I have seen several films already that won’t come out until 2012, but those will have to wait till next year at this time.  There were tons of great films that came out this year.  It was a hard year to narrow down.  I usually pick my top 10, by going through the entire list of releases throughout the entire year and then writing all the ones  really liked down.  Then the narrowing process begins.  Now my Top 10 list will probably be way different then most others you will see.  I tend to chose films for my list that I thoroughly enjoy time and time again rather than ones that might win awards at the big shows.  Without further delay here is my Top 10 films for 2011.

Much like the movie Kick-Ass where a normal average Joe takes on the role of a super hero without any powers, this film made by the badass James Gunn takes it to a whole new level.  Rainn Wilson, Kevin Bacon, and Elle Page are excellent in this film that has heart, soul, and tons of bloody fun.

Trollhunter is some of the best fun you will ever have in front of a movie screen.  Who would of thought a film about Trolls would be fucking insanely AWESOME!!!  I mean with the Troll 2 film which really wasn’t even about Trolls.  I can say this though, when the time comes for you to see ‘Trollhunter’, you’re gonna be in for the thrill ride of your life.  Fucking Epic!!!

This little gem of a film is exactly that.  Remarkable and nail biting as all hell.  I knew very little walking into ’Martha Marcy May Marlene’, but after its viewing, I knew I witnessed something special and spectacular.  The less you know about the film going in the better, so I will try to keep this review light on spoilers.  Bu tI just walked away from this film with a new hope for filmmaking and storytelling. With so much crap out there these days, it was so refreshing to see this film.  ’Martha Marcy May Marlene’ was original, beautifully shot, tense, scary, darkly romantic, and very well acted.  I wish I could buy a ticket for the world to see this movie.

This was, to say the least, one of my BEST film experiences i have ever had.  To be a part of this event was like being a part of history in the making.  At least that is what it felt like to me.  I first remember hearing that Kevin Smith (the Clerks & Mallrats guy) was writing and planing to make a horror film.  A political horror film at that.  This was a couple of years ago or more.  after i first heard this news, I thought to myself, “This could be something great.  Kevin can write dialogue like no one else and with his talent of writing, he can make one hell of a horror film.  But would it be comedic?  Would it have all the dick and butt-hole jokes like the rest of films have? I can’t wait to find out.”  And from what transpired at the Midland AMC Theatre on March 12th, 2011 was heavily drenched with heart, soul, courage, great filmmaking, Star Wars, and LOVE.

I was just blown away with ‘Another Earth’.  When I first saw the trailer I expected one thing.  What I got was so much more and then some.  Now I am a huge fan of science fiction and space exploration.  There has been many times, mostly in college, where I have had in depth conversations with friends about numerous scenarios of “what if a new planet was created that could sustain life just like Earth”.  This film has that scenario, but it is much deeper and has so much more going for it than just the sci-fi factor.  I can honestly say that ‘Another Earth’ is one of the better films to come out in a long time.

This was a classy way to end the series.  Very well done on all levels.  Yes of course I have my gripes, but overall this was just fantastic.  I am sad to see this franchise end, but look forward to the future of the Harry Potter franchise.  This second part was really the meat and potatoes of the whole 7th film.  All the action and climaxes are in part 2.  Excellent job.  I just loved this movie.

From the makers of ‘Hot Fuzz’ and ‘Shaun of the Dead’ comes this AMAZING, thrill ride of a film.  Remember the name Joe Cornish.  Brand that name into your brain.  He is one director to watch for.  Cornish made a total geekgasm of a film with ‘Attack the Block’.  This is an audience film.  You will want to see this with a huge audience and your friends.  You will be cheering and yelling throughout the entire film.  What an experience.  ’Attack the Block’ might be the most fun you will have at the cinemas all year.  SEE THIS FILM!!

‘Drive’ surprised the hell out of me.  I really didn’t know much about the film before I watched it other than the title and that it starred Ryan Gosling.  While I was watching the movie there were tons of times where I said “Holy Shit!” or I said “Fuuuck” or I said “Hoooly Fuckin’ Moses”!  I had no idea that ‘Drive’ was not only hardcore on every single level, but the character development and story line was some of the best I have seen all year.  ’Drive’ is an insane thrill ride with a heart of gold.  I loved every psychotic moment of this film.  And I think you will to if you have the stomach for it.

Ever since I watched the first trailer for Terrence Malick’s ‘Tree of Life’, I often thought about how the film could reach people emotionally and show people how beautiful everything is.  Not to mention, how it would affect how people could and would perceive what is possible with cinema today.  Also, as I was watching the film and after I viewed the film, I couldn’t help but bring my own personal emotions, history, and experiences to the film.  I have a feeling that a lot of people will do the very same.  To put it simply, Terrence Malick’s ‘Tree of Life’ is the most impressive and magnificent visual portrait of history and life ever put on film.

Now this has Spielberg written all over it, but this is purely a J.J. Abrams film.  And I believe it stands apart from the above previous mentioned films.  It’s purely a J.J. Abrams film and you will get that.  And I think his goal other to entertain us was to give us a film that could have been shown to me and my friends in the late 70′s or early 80′s.  What if you and a bunch of your friends found something out that one billion percent needed to be dealt with, and you all banded together without the knowing of your parents to get that impossible task done?  That’s exactly what ‘Super 8′ is.  I will be talking about ‘Super 8′ for a long time with all my friends and sharing our stories growing up and our adventures.  Thank you J.J. Abrams for this masterpiece.  And thank you once again Spielberg for making us all remember our childhood.