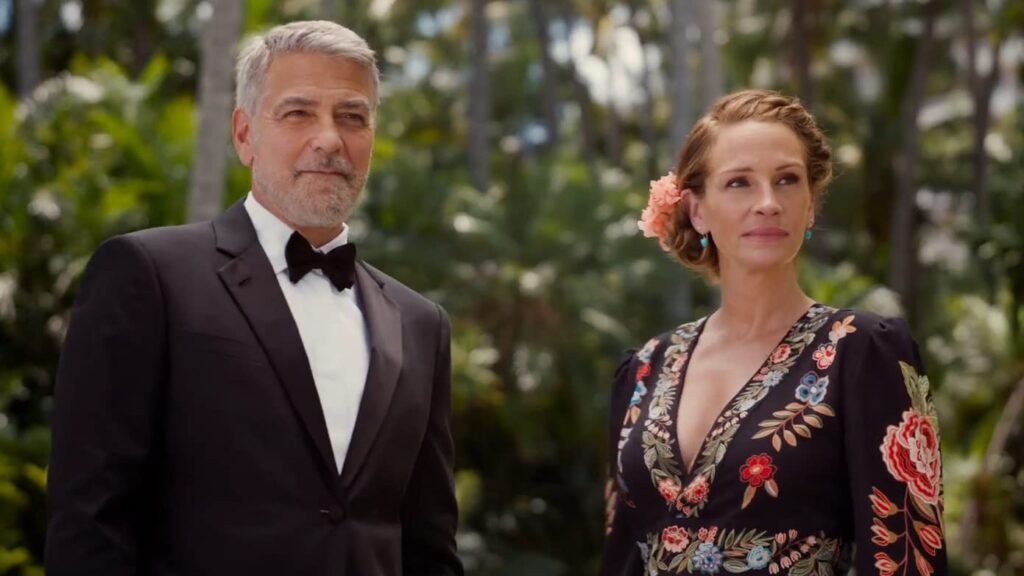 It’s strange to release a summery feel-good romantic comedy a few days before Halloween. When chainsaws are flying and masked killers are wreaking havoc, sometimes it’s nice to have a breather from all the chaos and entrails. Normally, rom-coms wouldn’t do well in the spooky season, but with star power like George Clooney and Julia Roberts coming aboard, all bets are fully on for a successful, cute, and funny film titled Ticket To Paradise. Even though there is nothing new in the form of a narrative or plot here, the dynamic duo are having a blast on screen with their wittiness and ability to have fun with one another in a tropical location. It’s infectious and Recommended!

It’s no secret that Roberts and Clooney are great friends and they would jump at the chance to make a fun film together on a sandy beach in paradise. Who wouldn’t? Ticket To Paradise was that opportunity for them that resulted in a good time at the movies with some of the world’s favorite performers. Romantic Comedies have a formula and most of them stick to this pattern for better or worse. Ticket To Paradise is no different as director Ol Parker (The Best Exotic Marigold Hotel, Mamma Mia Sequel) pairs the two David and Georgia Cotton (Clooney and Roberts) up as a divorced couple who would rather be tortured for years on end painfully than to see one another. The kicker is that they have a kid Lily (Kaitlyn Dever) together who has just graduated college and is going with her best friend (Billie Lourd) to Bali for a celebration.

Even at Lily’s graduation, David and Georgia couldn’t make it two seconds without fighting and arguing. A few months go by and Lily relays the news that she is getting married to a local Bali man and staying there. David and Georgia must now join forces to fight a common enemy – their daughter’s wedding where they plot out ways to sabotage every element of its ceremony and planning. The usual sight gags and funny moments do creep up, along with those more sentimental sequences and ultimately each character’s transformation. It’s business as usual in this department, but the chemistry between Clooney and Roberts is undeniable and exquisite and it’s such a joy to watch them on-screen having a ball, cutting it up, getting drunk, dancing to ’90s tunes, and insulting each other.

Ol Parker certainly knows his comedic beats and pacing with this short 100-minute comedy, where it manages to lay the groundwork, set up some payoffs toward the end, and fill it with jokes and a few emotions. Clooney and Roberts are just magnificent as they cut loose from their normal outings. It all is sealed in the end credits with a blooper reel that really drives it home that this film was made for everyone to smile and have a great time. Ticket To Paradise is Recommended, even during the Halloween season.