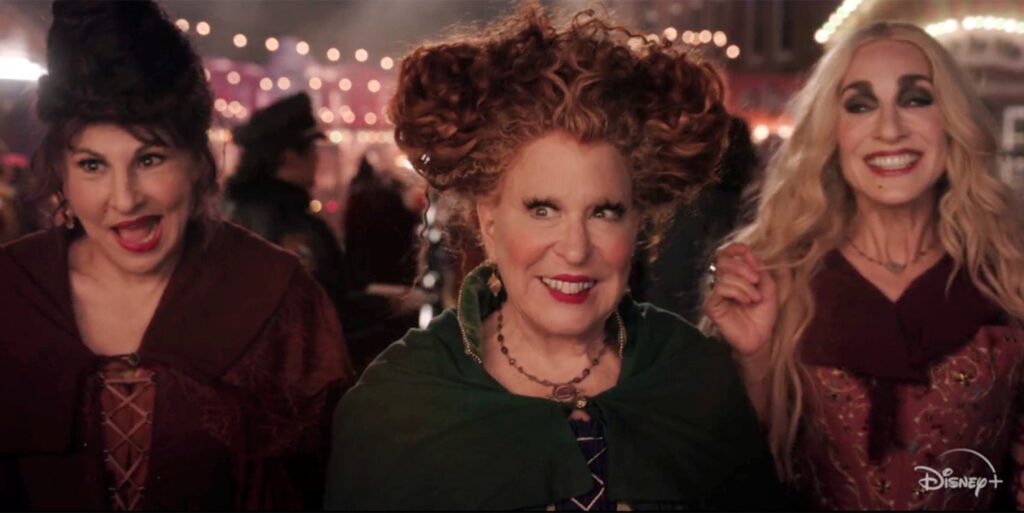 In 1993, Disney introduced three women to the world known as the Sanderson Sisters, who were alive during the 1600s and hung for their crimes of eating children. Of course, they are witches and could cast evil spells on anyone who crossed their paths. This sequel Hocus Pocus 2 reunites the iconic sisters and brings them back to the present day as they set out on revenge on the town of Salem once again while a group of teenagers try and stop them. With great performances once again, a killer soundtrack, and some meta-comedy, Hocus Pocus 2 is loads of great fun and is sure to be a new staple every Halloween. Highly Recommended!

As results have shown in the past, it can be difficult to make a sequel of a movie some three decades apart, but with Hocus Pocus 2, there was magic in the air, the stars were aligned perfectly, and everyone came back aboard to reprise their roles in a modern world. Director Anne Fletcher sat behind the camera this time, which showcased her excellent talent for comedic delivery, timing, and some good old-fashioned song and dance numbers, led by the ultimate rock-star Bette Midler (Winnie Sanderson). Not only that, but there have been almost thirty years in between both movies, where a lot has happened, including society and the respective culture learning to love witchcraft, witches, spooky things, and of course, the Sanderson sisters themselves. Every Halloween, there are multiple people that mimic and dress up like these characters, and everyone loves them. Hocus Pocus 2 gets meta with these aspects and has a ball doing so.

Fletcher starts out Hocus Pocus 2 with a much-needed origin story of sorts with a young Winnie, Mary, and Sarah going about their business in Salem in the 1600s. It’s clear they are outcasts already, but after a confrontation with the head of the village, the three girls are cast out into the woods, where a magical presence and a wonderful cameo appear that thrust the three sisters into who they become. In this flashback, a storyline from the previous film has some new evidence come to light that changes the narrative of the story in a good way. This opening act plays out a little like The VVItch, but of course, with a Disney family flare.

Now set in present-day 2022, three high-school friends Becca, Cassie, and Izzy are navigating their teen angst and their love for the Wiccan religion and all things spooky. They even have a local hang-out of all things witchcraft-related run by Gilbert (the hilarious Sam Richardson), and they’re all adored by Izzy’s Mayoral dad (Tony Hale), who has a long family lineage in Salem. With a candle burning, a recited incantation, and a full moon, the Sanderson Sisters are resurrected and they hope to use their famous book to cast the all-powerful spell and destroy Salem and beyond. But in between the lines here, both the Sanderson sisters and the modern-day teenage friends are sisterhood, loyalty, and friendship.

This message is spread throughout the film as Becca, Cassie, and Izzy learn to accept that boys, parties, and other activities are a part of growing up and might interfere with the trio’s love of witchcraft. Meanwhile, the Sanderson Sisters are taught that even though they get on each other’s nerves, they are sisters and love each other. It’s a sweet message that rings true in all time periods. Midler is a rock-star and she proves it with her performance where she intimidates people, charms everyone, and even rocks out on stage in a few musical numbers with Sarah Jessica Parker and Cathy Najimi. They are having a ball on screen again and their chemistry is contagious.

Hocus Pocus 2 is a wonderful good time with these characters again. The meta-comedy of drag shows and civilians dressing up and paying tribute to these sisters is hilarious and proves that the film and its filmmakers are having fun with its popularity in real life. This is a great sequel that delivers and then some. Let’s all hope for a thrid film, since just like in the MCU, there are end-credit stingers that would imply so. Highly Recommended!