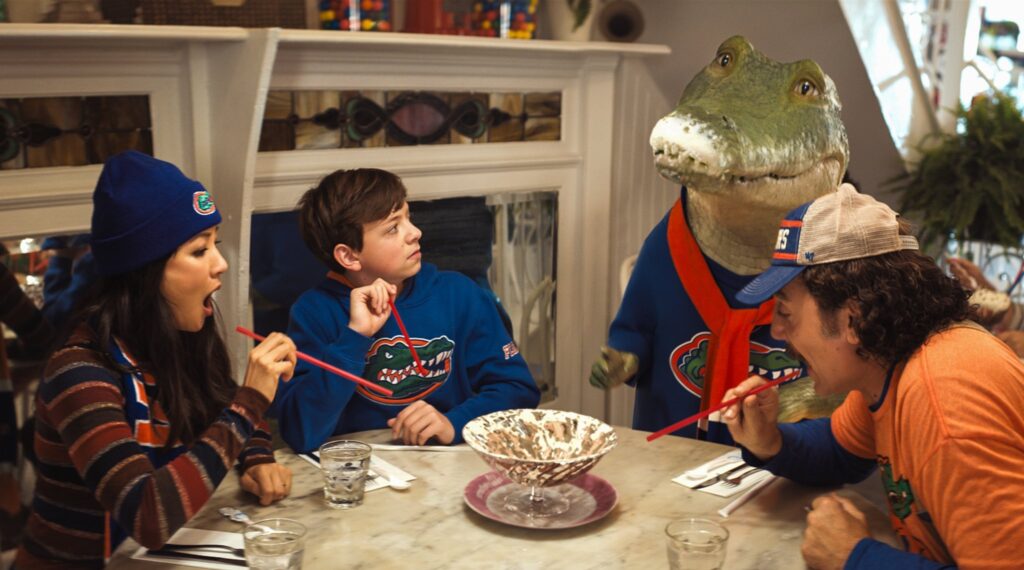 A dancing, singing Crocodile family film with Javier Bardem and Constance Wu at Halloween time? That just doesn’t make sense on paper, but with the directorial efforts from the duo Will Speck and Josh Gordon (Blades of Glory, Office Christmas Party), Lyle, Lyle, Crocodile is full of magic, fun, and an abundance of sweet and charming tricks that make this family film one of the sweetest films of the year. Through all of the depressing blonde-headed dramatic-artsy biopics of recent, and the horror-slashers, it’s nice to see something as decadent and nice as Lyle, Lyle, Crocodile in the mix, which with the talent, music, and entertainment behind this – it will give Paddington a run for its money. Not to mention, Lyle, Lyle, Crocodile is related to the film The Shining. Highly Recommended!

Based on the popular children’s books of the same name from the 1960s, Lyle, Lyle, Crocodile brings that vintage story to a modern-day Manhattan location with kid-friendly ideals on social media, reality television, singing competitions, magic shows, and culinary arts. At every turn, this movie feels like it could fail, much like how School Of Rock could have quickly given the premise. But like that film, Lyle, Lyle, Crocodile just embraces its total confectionary sweetness from start to finish that starts with a baby crocodile in the back of a pet shop. This little baby crocodile is as cute as Baby Grogu from The Mandolorian, but this reptile can sing and dance, which catches the eye of one Hector P. Valenti (Javier Bardem), a magician trying to make it in the famous world, but needs a new and original act.

Hector and his new cold-blooded friend Lyle start to live together and rehearse a routine. When lives are about to change into dollar signs and fame, Lyle gets cold feet and remains silent, which causes Hector to take off, leaving poor Lyle alone in a big house. More than a year goes by and Lyle grows into an adult crocodile when the Pimm family movies in. The married couple Joe (Scoot McNairy) and Katie (Constance Wu) have just moved to the posh Manhattan neighborhood with their son Josh (Winslow Fegley), who has no friends. Despite the move, the family all seem to be unhappy whether it be not being able to head the math class well at school, not enjoying the healthy diet without the more decadent things in life, and of course, being the new kid at a school.

Luckily for them, they all meet Lyle, who is more than just a singing, dancing crocodile. He has certain mysterious magic within him that brings out the joy and happiness in people, whether it be cooking, pro wrestling, or just being a good friend. Lyle doesn’t talk, but he can sing to communicate. He can understand English and realizes he just wants a family. When the downstairs neighbor Mr. Grump and his cat try and derail Lyle and the family, Hector shows back up and a roller coaster of emotions ensues. Fortunately, through some great musical numbers, some fun adventures in dumpsters through the city streets, and a televised television competition, the characters and Lyle soon figure out what the most important element of being happy is.

Shawn Mendes does a great job in making the crocodile harmless and kid-friendly with its CGI animation looking brilliant. Wu, McNairy, and Bardem are great here, despite this film not being their usual cup of tea. But they thrive in the musical numbers and are a blast to watch. The film runs about 100 minutes, which is the perfect length for enough laughs, sugary sweet moments, and musical numbers. This is America’s answer to England’s Paddington and it works well. The hope is for more sequels, but Lyle is the cutest here, and there is enough story for a few more films and escapades. Highly Recommended!