Terrifier 2 is a magnum opus of gory killer clown movies that not only delivers on entrails, blood, and other bodily secretions but also sheds more light into the mythology of Art The Clown (David Howard Thornton). Returning to the screen for its second installment, Terrifier 2 goes extremely big and messy than its predecessor. Not only that, but the film runs the same length as Goodfellas, which is about double the length of Terrifier Part 1. With the extra minutes added on here, Terrifier has plenty of time for more brutal kills by Art, guts galore splattering all over the screen, and of course, a narrative that brings old and new characters into the mix while exploring more about Art and what makes him tick. Art The Clown is not for everyone, but for those true horror fans and movie buffs, Terrifier 2 is loads of high-octane bloody fun that goes big with a smile. Highly Recommended for Horror Fans!

With most sequels, the goal is to further the story and go on a larger path with a bigger budget. That’s the case with Terrifier 2. With the added better production values and larger cast, Terrifier 2 develops a few plotlines and strays away from the simple narrative that a killer clown is on the loose. But what director Damien Leone adds to the film is the many faces of Art, metaphorically. Art isn’t just a maniacal clown, but there’s a softer side to him. There’s really no rhyme or reason to what he enjoys or dislikes, which makes this character so spontaneous that nobody will know if he’s there to give someone a clover out of kindness or mutilate them until it’s just bones and muscle. Basically, Art is the Willy Wonka of killer clowns and that’s something special. 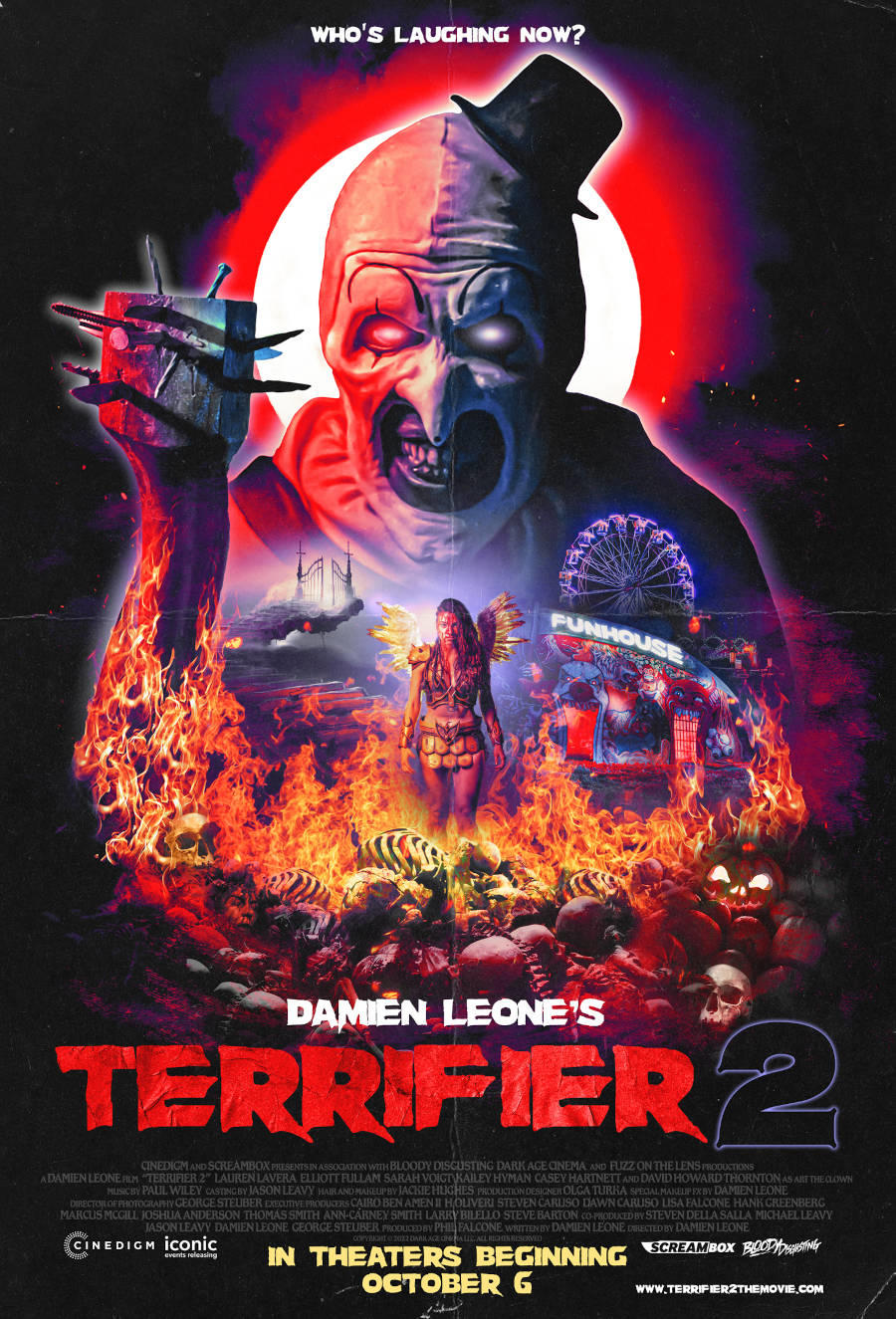 In this sequel, the carnage starts right where the first film ended with an unlucky coroner. From here, Art starts to see a young girl dressed similarly to him, and he develops a sweet, yet sadistic relationship with her that only he can see. There’s a tender side to Art here as this father/daughter relationship blossoms into patty cake covered in feces and blood. Meanwhile, teenager Sienna (Lauren LaVera) and her younger brother Jonathan (Elliot Fullman) are gearing up for Halloween and still reminiscing about their father’s passing. Since Art The Clown has become popular as the local haunted Boogey-clown, Jonathan decides to dress as him for Halloween. From here, both kids start having visions of extreme violent situations of people being horrifically killed and Art showing up. As the kids cope with their father, single mother, and Halloween, everyone around them, along with their own sibling love must survive the deadly and murderous glee of Art The Clown.

For those that have seen this first film, Terrifier 2 only upgrades and enhances the level of gore and blood this time around. And that is a milestone in and of itself with how gory the first film is. Again, this sequel goes big so the weapons that Art uses this time around range from unusual tools to a simple gun, which is all sorts of fantastic. Art is not above the simple way to dispose of someone. He also takes pleasure in the torture he inflicts with a simple sharp object. And Thornton plays Art perfectly. His creepiness factor is at an all-time high, but there’s also a kindness to him, which Thornton reveals through his body language, silence, and those intense eyes.

Terrifier 2 is the ultimate, bloody, fun-as-hell killer clown film. While it may feel overly long, there’s no shortage of kills, entrails, and guts. Also, there are some wonderful cameos, including the wrestling G.O.A.T. – Chris Jericho, who just steals the scene. There is a great end-credit sequence that will suggest a future installment of Art the Clown. Let’s all hope for more here. Highly Recommended for Horror Fans!