Raunchy comedies are a dime a dozen these days. But none of them star John Cena, who is perhaps one of the best and energetic comedic actors working today. Luckily, Vacation Friends stars the former WWE Champion in a hilarious role that is sweet, gut-bustlingly funny, and has a great message of friendship. With a wonderful cast about two couples who have the wildest vacation in Mexico, this film was a light-hearted and silly adventure that delivers yet another reason why Cena is the next leading man in comedy. Vacation Friends is a very good addition to the ever-stale raunchy comedy genre even if it tackles the usual tropes – but thankfully John Cena just steals every scene he’s in.

Vacation Friends has taken a while to get to the big screen dating back to 2014 where the formally married couple of Chris Pratt and Anna Faris were slated to star alongside Ice Cube in the film, which was to be directed by Steve Pink (Hot Tub Time Machine). Most likely due to the break up of Pratt and Faris, the film fell apart, that is until Cena (Suicide Squad), Lil Rey Howery (Get Out), Yvonne Orji (Insecure), and Meredith Hanger (As The World Turns) showed up with Clay Tarver (Joy Ride, Silicon Valley) in the director’s chair. The result is a laugh-out-loud journey full of drugs, alcohol, mishaps, and a wedding or two.

Vacation Friends centers on couple Marcus (Howery) and Emily (Orji) who are on the verge of getting engaged on their fancy trip to Mexico for some much-needed relaxation from their stressful life back home. Marcus is a serious man who never takes any risks and plays most things in life on the straight and narrow path. Once the couple arrives at their luxurious suite at their resort, they find their room completely destroyed and flooded to which Marcus is forced to propose on the spot to his Emily. Hotel guests Ron (Cena) and Kyla (Hanger) witness the proposal and immediately throw themselves at the newly engaged couple as wanting to be best friends with them. Marcus and Emily end up staying with Ron and Kyla in their presidential suite and proceed to have the best, raunchiest, wildest time in Mexico – full of cliff jumping, drugs, shots of tequila, dancing, a dangerous boat ride, and more.

After their vacation is over, the two couples say goodbye at the airport in hopes they’ll keep in touch, but Emily and Marcus don’t have any intention of that. Cut seven months later where Marcus and Emily are to get married the upcoming weekend and who shows up out of nowhere – Ron and Kyla, which then sets in motion a series of hijinx and comedy of the Odd Couple realm where Marcus struggles to impress Emily’s family with the crazy Ron by his side.

The film isn’t anything different than the thousands of comedy films of this caliber that came before it, formula-wise. But the Odd-Couple scenario mostly works when there’s a straight-laced character who is forced to mix with a crazy chaotic character, where Howery and Orji do a fantastic job of walking that straight-edged line. Meanwhile, Cena is just turned to eleven the whole time as he is excited at the most inopportune moments, delivers the funniest jokes, and even has a softer side as his ever-growing mysterious past keeps popping up. What makes Ron so great is his extreme loyalty and love for his friend, which actually has a nice and sentimental backstory. Cena’s physical comedy is just as great as his dialogue delivery and his co-star Hanger adds some special sauce to the mix.

Vacation Friends is very aware of the type of movie it is and has a ton of fun with its comedy and still feels fresh even though all of the elements have been seen many times before. It’s great to see a former actor from The Wire having a great time on screen here and the location shots of paradise are fantastic. The music cues are excellent including a Beastie Boys’ drop during a mushroom sequence is highly comical. Vacation Friends is a ton of fun and only elevates Cena to the comedic god of film. 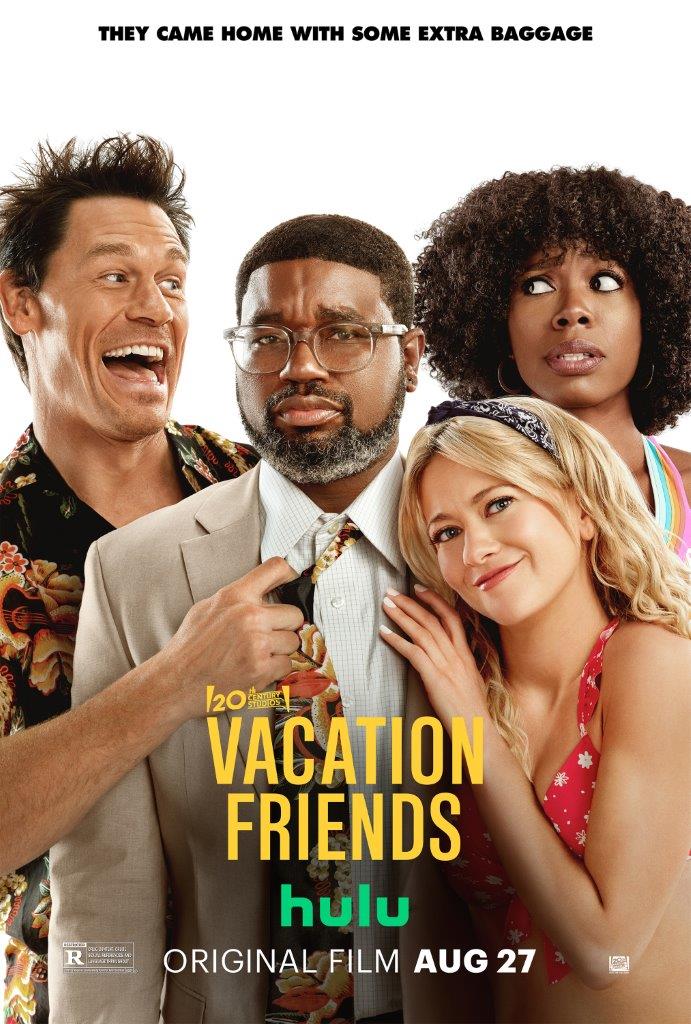