The Finale is Here!!! Harry Potter And the Deathly Hallows Part 2 Blu-Ray Announced and Detailed!!! 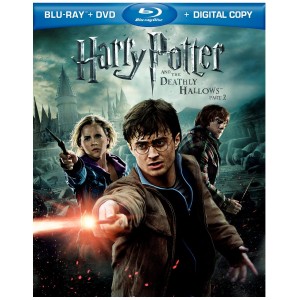 That’s right.  The final Harry Potter film will be released Novermber 11th, 2011 on blu-ray/dvd/digital download.  Also on that same day, an eight movie box set of all the Harry Potter films will be available.  You can find out all the details below.  Pre order your copy.

“In the epic finale, the battle between the good and evil forces of the wizarding world escalates into an all-out war. The stakes have never been higher and no one is safe. But it is Harry who may be called upon to make the ultimate sacrifice as he draws closer to the climactic showdown with Lord Voldemort. It all ends here.”

The Blu-ray/DVD combo pack will feature 1080p video, a DTS-HD Master Audio 5.1 soundtrack, and the only supplement shared with standard-definition releases will be additional scenes.

• Maximum Movie Mode hosted by Matthew Long (Neville Longbottom) and other cast members – As the epic showdown between Harry
Potter and Lord Voldemort approaches, don’t miss a single detail as the forces of Good and Evil clash one final time throughout the
grounds of Hogwarts.
• A Conversation with JK Rowling and Daniel Radcliffe – Join J.K. Rowling and Daniel Radcliffe for an exclusive conversation
about bringing the character of Harry Potter to life, the last decade of films and how their lives have changed by the fame that
they’ve both experienced.
• The Goblins of Gringotts – Hosted by Warwick Davis, you’ll see the entire process of becoming a goblin” on a Harry Potter
film, from auditions and casting to makeup and prosthetic tests as well as filming the final scenes.
• The Women of Harry Potter – A look at the remarkable women in Harry Potter’s life and the critical role they play in the
films.
• Warner Bros. Leavesden Studios Sneak Peek
• Deleted Scenes