Bryan Goes To “Red State” and Discusses Why It’s In The Top 3 Cinema Experiences Of His Life!!! 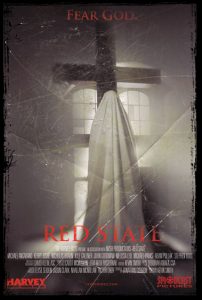 This past weekend I was fortunate enough to get to experience Kevin Smith’s latest film, “RED STATE” in Kansas City, Missouri.  This was, to say the least, one of my BEST film experiences i have ever had.  To be a part of this event was like being a part of history in the making.  At least that is what it felt like to me.  I first remember hearing that Kevin Smith (the Clerks & Mallrats guy) was writing and planing to make a horror film.  A political horror film at that.  This was a couple of years ago or more.  after i first heard this news, I thought to myself, “This could be something great.  Kevin can write dialogue like no one else and with his talent of writing, he can make one hell of a horror film.  But would it be comedic?  Would it have all the dick and butt-hole jokes like the rest of films have? I can’t wait to find out.”  And from what transpired at the Midland AMC Theatre on March 12th, 2011 was heavily drenched with heart, soul, courage, great filmmaking, Star Wars, and LOVE.

A little recap of this whole “RED STATE” situation goes back to Sundance 2011.  Kevin Smith debuted his much long awaited horror film “Red State”.  At the screening, Kevin told the world that he will be marketing this film in a different special way.  He was going to take to the film on the road from city to city doing one-time screenings across the USA to promote the film by word of mouth.  In addition to screening the film, he himself will be at each screening and do a Q & A about the film.  The film will get a wide release in mid October.  But on this RED STATE tour, one of the stops was Kansas City, MO.

Now Kevin’s film is basically about three friends who go into the woods to get laid by some lady they met on the internet and soon encounter a flock of religious fundamentalists who have a much menacing scheme than meets the eye.

Now these religious fundamentalists were based on  a certain real group of people.  You might have heard of them.  The Westboro Babtist Church based out of Topeka and led by founder Fred Phelps.  You have probably seen these people on the news with their “GOD HATES FAGS” signs and when they protest funerals of soldiers.  Now this church does not have a lot of followers.  They are mostly compromised of the family of Fred Phelps and only number in a few dozen members which are all mostly family.

Now that Kevin’s film is based on this Church and their beliefs or is somewhat a jump off point for his film, this part of the RED STATE tour being in KC and only a few miles away from Topeka, Kevin invited the Phelps family to screen the movie.  Well let’s just say…SHIT HAPPENED!!

To start things off we knew the WBC Phelps people would be out in front of the theatre protesting the movie and their usual rhetoric of GOD HATES FAGS and everything else.  So usually their our counter protestors that have really endearing and funny signs such as: “God Hates Ewoks” or “On the Seventh Day, God Created the Unicorn” , and other signs of that nature.  One of the signs from the Sundance Film Festival where Kevin debuted the film and the protestors were out was “Dick Tastes Yummy” and one high school student held up  a sign that said “GOD HATES HOMEWORK!”

So at the theatre there was about twenty five Phelps people and about seventy five to one hundred anti Phelps people protesting.  I had to get in the mix and hold up a sign so I graciously asked someone for their sign and I walked it over to the “GOD HATES FAGS” side and stood in the middle of the Phelps people with my sign of LOVE!! 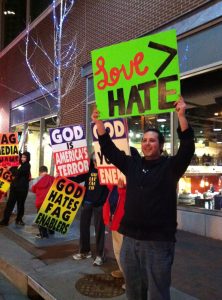 It was a great feeling.  The Phelps side did not say a single word to me.  They were all singing HATE songs that were actually covers to pop songs.  I heard a hate song to the tune of “We Didn’t Start The Fire” by Billy Joel at one point.  I laughed out loud.

After I stood my ground and stopped holding my sign we went into the theatre to go to our front row seats.  We had found out earlier in the day that Kevin did invite the Phelps crew to the screening and that they had accepted the offer and that Megan Phelps (the head of the media for the WBC) was going to be there and get up and do a Q & A with Kevin.  So this was set to be a crazy ass experience.

So Kevin came out and introduced the film and told all of us who was there and what was going to happen.  Everyone was excited.

So the movie started and…..(Spoiler Free)

This is Kevin’s best looking film.  It’s hard to compare it to his previous work, because it is very different.  It’s on the other end of the scale.  Don’t expect “Snoogans” or “Ass To Mouth” in this film.  This film is brutal, tense, and heart warming all at once.  You will go through many emotions throughout the duration of this film.  It will challenge you in a way that most films will never do.  The film sticks with you.  You will talk about it long after you have viewed it.  Just talking about this film makes me want to watch it again.

The acting in this film is AMAZING!  Michael Parks (Dusk Till Dawn, Grindhouse) plays the leader of the church in the film.  He gives us a 20 minute sermon in the beginning of the film and it is one of the best acting monologues I have ever seen.  The camerawork and direction for this sermon scene  from Kevin is his best work to date and just pure fucking ROCKS!  It is bat shit intense.  Michael Parks deserves an acting award for his role in this film

John Goodman plays a law enforcement officer or FBI agent who gets called to the “situation” going down at the church.  John Goodman just owns this role.  He is brilliant.  Kevin write this character so well that it plays out so real.  Goodman is so good in this role.

It was great to see Michael Angarano and Nicholas Braun in this film together.  They were both in the film “Sky High” and they had great chemistry then.  I thought that was a funny side not that both those actors were in  Sky High and are now in this horror film.

The entire film is one hell of a roller coaster thrill ride that will gut punch you many times throughout the entire film.  The dialogue is simply superb and here and there you will see a hint of the “old Kevin” riddled through out the film.

Make no mistake. This film is ultra violent and makes no apologies.  Kevin made a masterpiece with this film and it needs to be seen.

There are really no good guys in this film really.  It is pure animalistic human nature at its worst and it is let loose in a completely fucked up situation.

If you get a chance to see the “RED STATE TOUR” with Kevin Smith I absolutely highly recommend you do so.  Tickets are about $65.00 – $75.00 dollars.  It is completely worth every penny.  Again the film will be released wide in mid October. 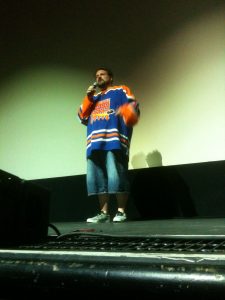 During the film, Kevin was tweeting audiences reations to the film as it was playing and then he said that at about the twelve to twenty minute mark of the film, the Phelps clan tapped him on the shoulder and told him his movie was filthy and left the screening and that Megan Phelps would not be doing the Q & A.

Via @WBCSteve “Filth is filth. You think God doesnt see?” God is the source of artistic inspiration, so God (and SMod) made RedState. YOU

guys just walked out on God’s movie. God hates hypocritical pussies who can dish it out but can’t take it way more’n anything else. #SMo

If you’ve just tuned-in, the Phelps family pussed-the-fuck-OUT of RedState before the 20 minute mark. Guess they have feelings, too… #SMo

So everyone kinda of expected this, but we were all pretty disappointed that they left.  I agree with Kevin….PUSSYS!!!

And then it happened….

Two audience members came to the mic to ask a question, but instead they identified themselves as Libby and Josh Phelps.  Two of the kids of the church who left the church years ago and they wanted to give the real and honest story of their lives growing up in the church and what they thought of the film.  What transpired was historic and simply AWESOME!

As soon as Kevin realized who they were, he invited them on stage with mics an chairs and he began to ask them all sorts of questions and him and the audience got a big glimpse of what life was like for them in the church and how true Kevin’s film was.  It was very emotional.

One of the questions Kevin asked was “are the beliefs your family in the church believes for real or is it just to get publicity?”  They answered…Both.  They absolutely believe what the preach and it is all about making it known publicly.  Even if people are negative towards them, it still gets them thinking about their message, Libby and Josh said.  They even said that their parents used them in a way that they put them in public schools to spread their message of HATE.

Another question that Kevin asked was “how does the church and family make its money?”  This got a big reaction from the crowd.  Josh and Libby answered that everyone is fairly successful…there are tons of lawyers in the family amongst other professions.

Another question Smith asked was, “do you still have contact with your family?”  They both said no.  When you leave, you are out.”  It was very sad and emotional.  They do not have a mom or dad anymore, but they get holidays.”  They went on to explain that they didn’t get to celebrate holiday except for their birthdays growing up.  Very tough to go through that.

Both libby and Josh apologized several times for their old belief systems and a lot of the audience members yelled things like, “WE FORGIVE YOU”  or “WE LOVE YOU”.  It was so heartwarming.

During #SMo Q&A, we got an amazing surprise: LIBBY & JOSH, 2 Phelps kids who left the church, gave us the “straight” story of their family.

Josh nearly made me cry when he said “I wanted to apologize to Matthew Shepard’s family while I was up there.” Good guy, great night. #SMo

“Phelps walked out of the flick but came back for the Q&A?” The bad Phelps left, the good Phelps who fled WBC showed up!

“Josh was so grounded & Libby, as you pointed out, Sweetest Nazi ever. Loved her Giggle” Took guts to get up there, too.

They had to leave their family; and as fucked up as their family is, it’s STILL their family. Josh lost a Mom but now gets a Christmas.

God bless the RebelPhelps. To get the taste of the SithPhelps out of my mouth, I buried my tongue up my wife’s ass.#IPreferHerShitToTheirs

It was such an amazing experience.  The whole theater was filled with LOVE by the end of the night.  It was remarkable.  I was so glad  to be a part of it.  It truly was one of the best cinema experiences of my life.

See this film.  Get tickets for the RED STATE TOUR HERE.  Or wait till mid October and get your ass to see this film.