Bryan Finds ‘Another Earth’ Outstanding, Impressive, and Out of This World!!! (A Review) 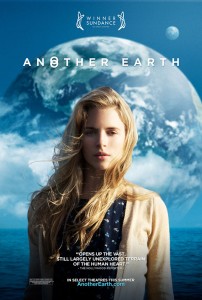 I was just blown away with ‘Another Earth’.  When I first saw the trailer I expected one thing.  What I got was so much more and then some.  Now I am a huge fan of science fiction and space exploration.  There has been many times, mostly in college, where I have had in depth conversations with friends about numerous scenarios of “what if a new planet was created that could sustain life just like Earth”.  This film has that scenario, but it is much deeper and has so much more going for it than just the sci-fi factor.  I can honestly say that ‘Another Earth’ is one of the better films to come out in a long time.

‘Another Earth’ was written by Brit Marling and Mike Cahill.  Cahill also directed the film while Brit was the star of the film.  These two are relatively newcomers on the scene, but after viewing ‘Another Earth’ you will be pining to see what they do next.  One thing I really loved about this film was that even though it will be billed as sci-fi, it still feels very organic and wholly believable. Nothing about it seemed out of the ordinary.  It was beautiful, tragic, and heartwarming.  Just like real life.

So upon viewing the trailer you will see that one day, a planet that 100% resembles Earth in every way appears very close to Earth’s atmosphere.  You realize that even the land masses are mirror images of Earth. Then what seems to be a prominent and important lady tries to make contact with this second Earth.  She is welcomed with a voice that is all too familiar.  It is herself.  So now there is not only an identical Earth right next to actual Earth, but there are the same identical people on the second Earth as there is on actual Earth.  Think about that.  Another you.  Duplicates of your best friend and family.  That is what you will get out of the trailer.  But that is only the backdrop of the film.  The film is really a simple tale of two lost souls.

So we meet Rhoda Williams played by the beautiful Brit Marling who is a lovely young woman on the verge of being a M.I.T. student of the astrophysics program where she can fulfill her life long dream of exploring the universe.  She is celebrating her success with friends and as she is driving on her way home when the world and she notices the appearance of another Earth.  This causes her to lose focus and accidentally crash into a car filled with a family.  The family consists of John Burroughs (played by Jame Mapother) who is a famous music conductor at the height of his career, his wife, their small child, and their unborn child inside his wife’s belly.  John is the only survivor.  Four years pass and we see Rhoda being released from prison.  Her future with M.I.T. is long gone.  We can see she is deeply depressed still about the accident that caused the death of a family.  She wants to confront John and tell him that she was the one that was responsible for that tragic night and give her most sincerest regrets and apologies.  She tracks down John who has become a shell of what a man should be and looks to have given up on everything.  His house, his body, and life are a mess.  When she knocks on his door, she loses control and her nerve and does not tell him of her past or who she is.  Instead she, sees the life he is leading and she wants to make his life happier and good in any way possible so she lies to him and tells him she is a maid from a maid service.  So she starts cleaning up his house little by little and developing a relationship with him.  In the meantime, a giant corporation is holding a contest for a plane ticket for the first trip to the second Earth.  Rhoda enters the contest by writing an essay online on why she should be chosen.

From here on out both Rhoda and John are on a journey to try and become a human being again.  These two people are forever connected because of that night and we see their downfall and their eventual rise to happiness again.  Both Rhoda and John are extremely likable throughout the whole film.  You really do develop emotions for both of them over the course of the film.  This is perfectly executed by the talent of the director and actors.  ‘Another Earth’ dives deep into your psyche and asks the philosophical questions you have asked yourself right before bed or in front of the mirror.  After viewing the film I have no doubt you will be discussing it for hours on end.  Every part of ‘Another Earth’ is beautifully made and brilliant.  I highly recommend you see this film and I can’t wait to see it again.  I look forward to new projects from Brit and Cahill.  Simply Magnificent.