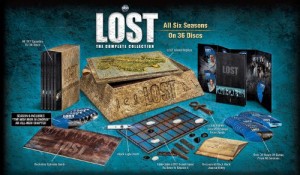 WOW!  The cheapest ‘LOST’ ever.  I’m not sure for how long, but the entire series of ‘LOST’ is currently on sale for 64% off.  This is that badass bluray set that is in the shape of the island and comes with games and secret compartments.  The set is currently on sale for $99.  This is the cheapest it has ever been, but who knows for how long it will be on sale.  Take advantage if you are a ‘LOST’ fan.