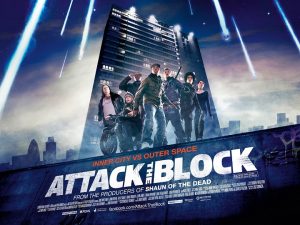 Overall, ‘Attack the Block’ is a kids film.  Yes, it is rated ‘R’ for language and gore, but it really plays out like an 80’s kids adventure film.  ‘Attack the Block’ reminded me of a more violent ‘Goonies’ or an inner -city ‘Super 8’.  Basically the plot of the film follows a group of teenage gang members in the poor part of South London who rob and steal to gain street cred amongst their friends.  Aliens from outer space invade their territory and it is up to them to protect their neighbors and save their own lives and kill the aliens.  We have seen this story done before, but we have not seen it done in this way.  Usually we have a very likable group of characters who are very smart try and take out their enemies.  ‘Attack the Block’ shows us our characters at the beginning of the movie robbing and beating an unarmed woman.  You really don’t like them at the beginning of the film.  You want them to die quickly and be put in jail as punishment for their crimes.

But over the course of the film, something happens to you.  Your impression of these teenage gang members quickly goes from hate to love and you are rooting for them.  It’s something not often seen on screen!  It’s perfect.  So the teenage gang rallies up and tries their best to protect their neighbors in their apartment complex.  One of them being a character named Ron played by Nick Frost which is the only actor you will recognize in the film.  Ron is a fun loving pot dealer who is hilarious throughout the entire film.  The kids al hole up in Ron’s apartment because he has the most secure flat in the building.  The other character besides the teenage gang is a female named Sam played by Jodie Whittaker.  She is the victim at the beginning of the film being robbed and beaten by the gang. 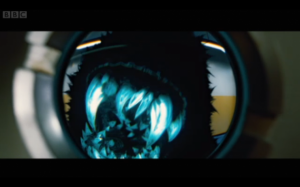 But when the aliens invade, she has no choice but to stick with her attackers.  They develop a relationship that is pure and over time respectful and full of love.  This is done so eloquently and perfectly by director Cornish.  I also really loved how no one character is truly safe from these aliens.  Shit gets real.  Danger and death are around every corner.  People die in horrific ways.  You can see the kids are scare out of their minds as they try to figure out the situation that has landed upon them and how they learn to handle it.  Being in the gang, they can’t call the cops or government for help.  The have never been helped.  They just get locked and taken away.  So they are on their own and look out for their own.  And my favorite character in the film is Moses played by the amazing newcomer ‘John Boyega’.  He plays the leader of the gang.  He is the one you hate the most in the beginning, but then something wonderful happens, your feelings for him change to the opposite of hate.  He brings so much charisma, charm, and badassness to the role that he becomes your hero and everybody’s hero.  Watch out for Boyega.  He is going places.  Now for the aliens.  The aliens are fucking ugly, scary monsters.  They are a cross between a giant hairy gorilla and werewolf with glow in the dark rows of teeth who can also jump to great heights and climb any structure.  They are terrifying.

I cannot wait to see this film again.  This film deserves to be seen by everyone who is a fan of cinema.  This is one of the best alien films to come out in recent years and is the most fun you will have the cinema possibly in the next decade.  I can see kids playing this film in their neighborhoods.  Kind of like how we used to play and act out ‘Star Wars’.  Kids who get the opportunity to see this movie will no doubt be trying to act out dealing with an alien invasion in their neighborhood by protecting their neighbors.  Go see this movie.  Campaign online and get a petition going to get this film played in your city.  It deserves to be seen.  One hell of a film.  Loved every second of it and I still want more.  I’ll be seeing this movie a dozen more times in the next month or so.