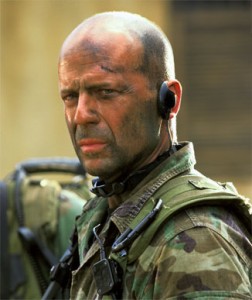 Paramount is currently negotiating with Bruce Willis for him to play Jon Colton, the original G.I. Joe.  Paramount has been eyeing Willis for a while now to play this part.  People have said they have others in mind, but Paramount is putting all their eggs in one basket in hopes to get Willis for this role.   If  Willis and Paramount come to an agreement, then most likely he will do this role before the next ‘Die Hard’ film.  Plus Paramount is looking to announce a director soon.

Their list of directors include: Joe Cornish (Attack the Block), Justin Lin (Fast Five), John Moore (Max Payne), and Nicolas Refn (Drive).  My personal pick is Joe Cornish.  He could make the G.I. JOE franchise succeed where the last one failed.  Also, let us not forget to mention Bruce’s film ‘Red’ is planning a sequel.  We will update you soon.