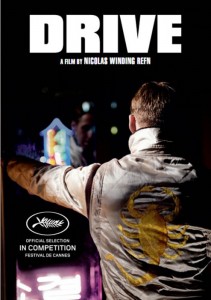 ‘Drive’ surprised the hell out of me.  I really didn’t know much about the film before I watched it other than the title and that it starred Ryan Gosling.  While I was watching the movie there were tons of times where I said “Holy Shit!” or I said “Fuuuck” or I said “Hoooly Fuckin’ Moses”!  I had no idea that ‘Drive’ was not only hardcore on every single level, but the character development and story line was some of the best I have seen all year.  ‘Drive’ is an insane thrill ride with a heart of gold.  I loved every psychotic moment of this film.  And I think you will to if you have the stomach for it.

Nicolas Winding Refn directed this gem of a film which is based on the book by James Sallis.  Refn is responsible for bringing us the amazing ‘Bronson’ with Tom Hardy.  We follow Ryan Gosling who has no name and goes by ‘Driver’.  He is a stunt driver and mechanic by day and moonlights as a freelance for hire to do odd jobs, some of which are criminal activity.  He is the getaway driver for these odd jobs.  An opportunity arises for him to be an actual race car driver at the expense of two local gangsters.  Meanwhile ‘Driver’ has taken a liking to his female neighbor Irene (Carey Mulligan) and she in turn has taken a liking to him.  But, she is married with a kid, but her husband is in prison.  After a while, he gets out of prison and they invite ‘Driver’ into their home and make him part of the dysfunctional family.  Unfortunately the just out of prison husband owes money to some gangsters and they tell him to rob a pawn store.  He enlists the help of ‘Driver’.  During the robbery, things go horribly wrong and the husband is gunned down.  ‘Driver’ quickly grabs the bag of money and burns rubber out of the area to only be followed by the gangsters.  We find out this was an elaborate set up for a bigger scheme run by the two top gangsters.  From here on out the gangs outfit is after ‘Driver’ and the people he is close with.

What follows is complete necessary brutal revenge and survival until the last two top gangsters are dead.  Yes, ‘Driver’ is an anti-hero, but he has a certain quiet and haunting charm and kindness about him, that you see that he is actually a good person and protects everyone around him.  ‘Drive is perfectly filmed.  It is almost a ballet of sorts on how beautifully and intricate the detail is in every shot, even in its most brutal and hardcore of scenes.  Some people have compared this film to ‘The Man With No Name’ Trilogy because of Ryan Gosling’s character not speaking but very few words through the entire film.  But from what he doesn’t say, we get so much more from his body language and emotion and from what other characters speak and think of him.  It is pure genius.

‘Drive’ is so much more than a heist gone terribly wrong type of film. It dives into the deep psyche of our protagonist and take us on a journey with him through his darkest and best moments.  You really cheer for him.  This film was wonderfully cast.  Ryan Gosling is perfect in this role.  He plays a badass perfectly with an emotive yet entrancing swagger.  The two gangsters are played by Albert Brooks (My First Mister)  and Ron Perlman (Hellboy).  I haven’t really seen Albert Brooks play a bad guy like this before.  He is unrelenting and so good at playing evil.  He needs to do it more.  Plus he brings a little bit of comedy to the table with his role.  Ron Perlman is the other gangster who plays a moronic asshole gangster who wants to be respected.  Perlman is so intimidating in this role and is just brilliant and steals the scene every time he is on camera.  Also. Bryan Cranston (Breaking Bad) is in the film and plays the role of the owner of the auto shop where Gosling works.  Cranston might be one of the better actors of the last ten years.  He plays this emotional character to a tee.  Christina Hendricks (Mad Men) is great too, but has only a couple of lines and is on screen for a mater of a few short minutes.

I loved everything about this film.  It is a great edition to the modern noir category with a hint of the car genre injected into it.  The stellar cast and acting along with the character development and over the top gore and action scenes make ‘Drive’ a MUST SEE.  Highly Recommended.  See this film.