“Over The Moon is a beautiful color-filled spectacle.”

Netflix continuously puts out new content every single week in order to keep subscribers happy. This week, they dropped Rebecca and Over The Moon on their ever-growing audience. Over The Moon is the latest offering to parents who need approximately ninety minutes of quiet time and it fully succeeds at that goal.

Over The Moon follows a young girl, Fei Fei, who after losing her mother at a young age goes on an adventure a few years later to investigate one of her mother’s favorite legends. The legend is the story of a goddess who is waiting on the moon for her lost love to return. When she meets the moon goddess, it’s learned that she is not as nice as imagined and requests Fei Fei brings her a gift. Fei Fei decides that if she can prove the moon goddess is real then maybe her father won’t get remarried.

The biggest issue with Over The Moon is that it does nothing that a previous animated movie hasn’t done better. It is another children’s film that is about processing grief but it isn’t as warm as Inside Out, or Up, or even portions of How to Train Your Dragon. So while the colors and animation leap off the screen to hold the viewer’s attention, none of the themes land with any power as it all seems a little bit half-baked. This is especially disappointing as a Netflix animated original such as Klaus was such an incredible breath of fresh air last holiday season. 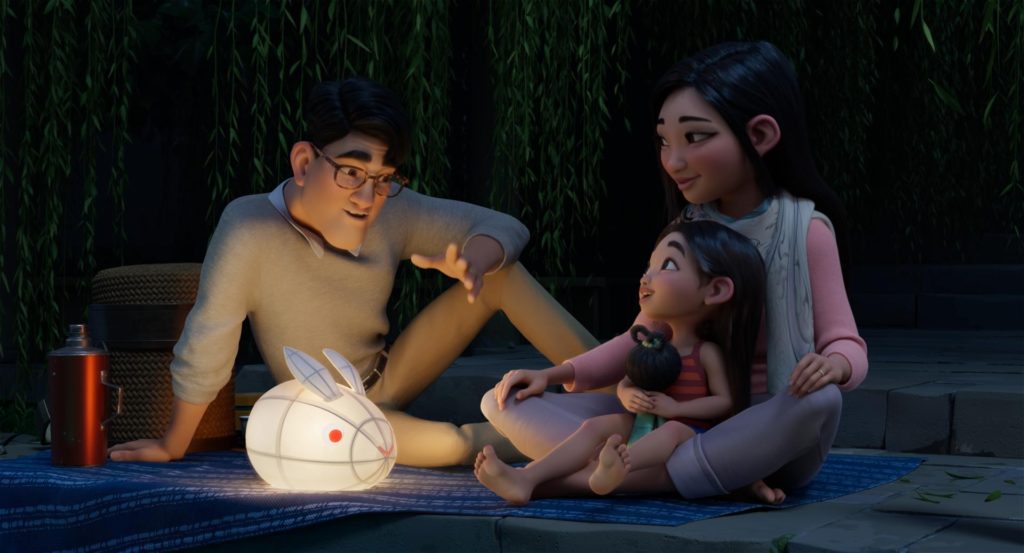 Any parent can’t help but feel crushed under the weight of the endless typical animated tropes. Gobi (voiced by Ken Jeong) was clearly written into the story as a combination of Olaf, Timon, etc. to the point he offers nothing we haven’t seen or heard in every single Disney movie that has come before. A lot of this is due to the fact the director worked on The Little Mermaid, Beauty & The Beast, and other Disney classics. In not wanting to take away from the director’s accomplishments here but the mad-libs-like feeling this movie had is quite the bummer.

Over The Moon is a beautiful color-filled spectacle that will hold a gaze for its entire runtime but it offers nothing new to the animated movie catalog. Visually this movie has everything it needs but the story and themes aren’t executed at a level that warrants much praise.

WATCH OVER THE MOON ON NETFLIX