Formally called Vengeance, ‘Night of Champions‘ quickly became a popular PPV in the WWE universe ever since it debuted back in 2001 where The Rock, Stone Cold Steve Austin, Kurt Angle, and Chris ‘Y2J’ Jericho battled each other over the course of a few matches with Jericho winning in the end, becoming the first Undisputed champion. This year, Night Of Champions took place in Houston, Texas and had some spectacular moments. In fact, one of the matches had me yelling out praises throughout. We will get to that match in a minute. In other segments though, things fell a little short, mostly dealing with Sting, who definitely didn’t deserve to be in the main event with current champ Seth Rollins, and who didn’t deserve to have his image and likeness on all the promo art. Don’t get me wrong, I like Sting. He’s a damn fine wrestler. Or shall I say, he WAS a damn fine wrestler back long ago, but not so much anymore. There is far too much talent in the back locker room to give Sting a shot at the championship. First off, Sting doesn’t show up to almost anything, but a couple time a year, whereas everyone else are having matches day in and day out in the WWE. And it just doesn’t make sense to have a guy like Sting who is barely there, more than twice Seth Rollins’ age, and not involved in any long story line to make this match believable, let alone anyone thing for a second that Sting could win the WWE title belt. But first, let’s start at the beginning. 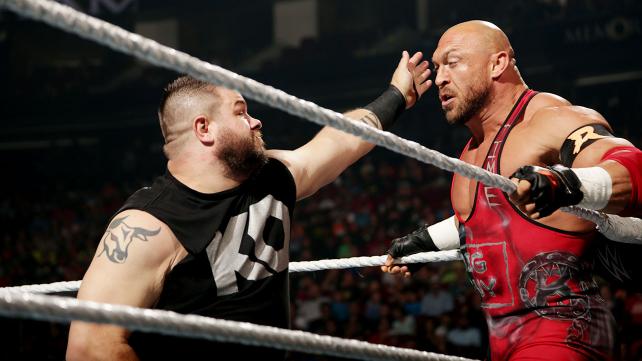 This was a great match to start the night. Kevin Owens, formally of NXT, has been jumping up through the ranks for the last few months. He had a good feud with John Cena for a while as well as Cesaro. Now his antenna turned up on Ryback, who has the equivalent strength of two rhinos. He might be as muscular as one too. The guy is a beast and is always hungry to beat anyone in his path, which is why he constantly says “Feed me More”. Maybe one day he’ll yell out ‘Feed me Seymour”. One can hope. 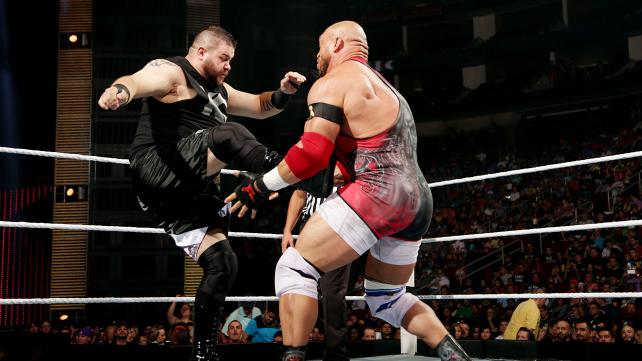 Now Kevin Owens is a bit chubby and is not as muscular as almost anyone in the WWE right now, so it’s uncanny and incredible to see Owens doe the top rope stunts and twist his body the way he does. This was an intense powerhouse of a match with each superstar taking devastating blows, but Owens triumphed and is our current title holder, but who knows for how long. I hope it’s for a while so he can climb the ladder to the WWE title, because he sure deserves it. Ryback still proves he is one of the best big guys in wrestling.

So for the past several months, we’ve seen this storyline where the Russian bad guy Rusev had his girlfriend Lana leave him for Dolph Ziggler, the all-american party guy. Summer Rae took up a romantic relationship with the Russian shortly after and now the two couple have been at each other’s throats for a while now. The story line has grown old and tired, and I hope this is the end of it. 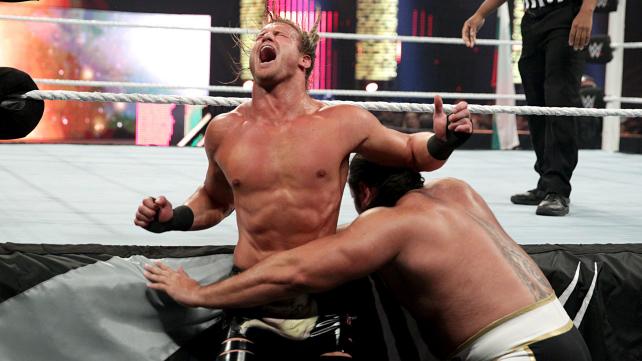 This was a decent match up, but again, we’ve seen these two go at it so many times, that we’ve seen everything before, which is why the match ended with Summer Rae throwing her shoe in an anger rage, hitting Rusev in the head with it, thus allowing Ziggler to put the finishing move on Rusev and scoring the victory. I expect a story line of Rusev treating Summer Rae like crap for a while, with hopefully a new rival for both. This match was average at best.

The Dudley Boyz defeated The New Day by disqualification 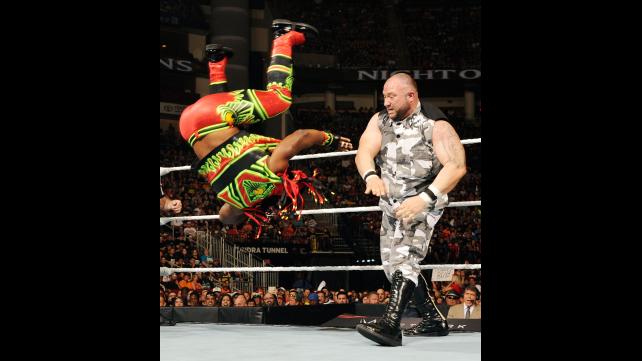 The New Day is the best thing to happen to the Tag Team division of WWE since the days of…well, the Dudley Boyz, The Hardy Boys, and Edge and Christian. The New Day’s persona, ability to work the crowd, and impressive in ring moves are amazing, all of which come together to form the perfect tag team. Luckily for all of us WWE fans, The Dudley Boyz are finally back where they belong – in the WWE, and they haven’t missed a beat or missed a table to put their opponents thru.

Xavier Woods came out sporting the same hairdo as Rufio did in Spielberg’s ‘Hook’ movie, which even got him a “RUFIO” chant. Not only that, The New Day started a new chant with “SAVE THE TABLES”, which contradicts The Dudley Boyz iconic phrase “Get the Tables”, which usually means the demise for their rivals. The Dudley Boyz took a beating early on, inside and outside the ring, only to have them muscle through it with what little energy they had left to score the win for the Tag Team titles. However, Xavier Woods and his trombone interfered, disqualifying The New Day, leaving The Dudley Boyz the winner. That being said, the title belts stay with The New Day. This is good news, because it means more Dudley Boyz and New Day matches. And of course more tables. Bonus points for Xavier Woods playing ‘Gonna Fly Now” on his trombone. 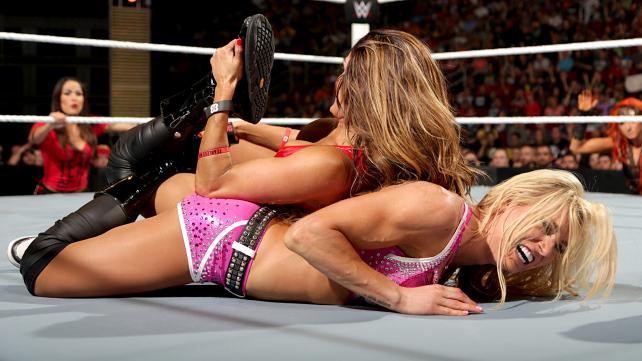 Nikki Bella of the Bella Twins has been the Diva’s Champion for over 200 days, which is the longest in WWE history. She’s one hell of a wrestler and has deserved this run, however her story line has declined in the past few months, leaving her matches kind of tiresome. However, she keeps brining her heel style and attitude to each match. Then there is Charlotte, who is Ric Flair’s daughter from NXT, who is just as hardcore as they come in the ring. This match was intense with Nikki working Charlotte’s long legs from the start. 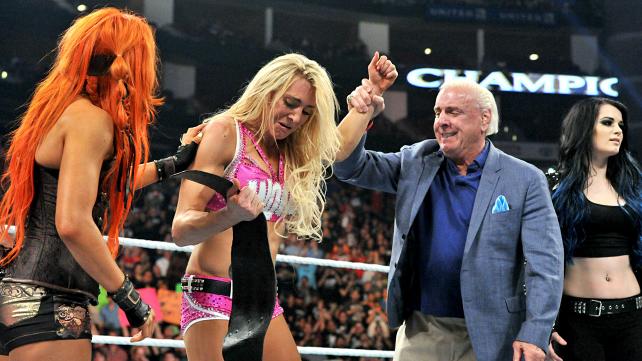 It got me thinking of the ‘Karate Kid’ movie with ‘Sweep the Leg’. For most of the match, Nikki was in charge, and it even looked like she was going to retain the title for more days, but even with a hurt leg, Charlotte put Nikki in the Figure Eight, forcing Nikki to tap out, thus having Charlotte win her first Diva title ever. Even Ric Flair came out and cried with his daughter on her first win in the business. I’m looking forward to seeing Charlotte reign over this title, but that means every diva, even Paige will be after the belt. Good stuff here. 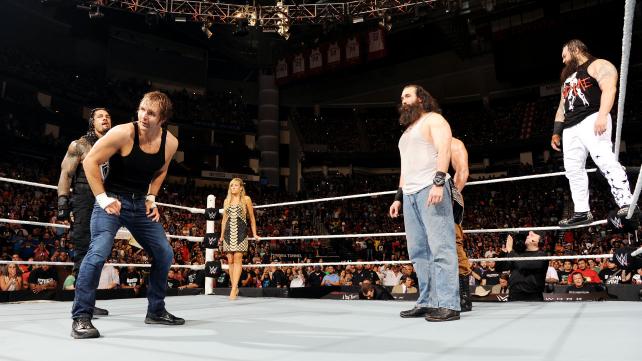 I just don’t think the WWE knows what to do with the Wyatt family, Reigns, or Ambrose at this moment. These matches seem forced with not real fun or entertaining story arc. That being said, this match was pretty fun i this six man tag match. It was Bray, Luke Harper, and the giant beast Braun Strowman taking on Dean Ambrose and Roman Reigns with their mystery partner who was revealed at the time of the match, which was Chris Jericho. The crowd went wild, as it’s been a bit since Y2J has wrestled. It was a back and forth match for the most part with the lunatic fringe flying over the ropes, only to meet a giant Strowman who could easily plow through anyone.

Even with superman punches and spears, Reigns and Ambrose couldn’t nail down the job, which led to Y2J being caught in Strowman’s bear hug, putting him to sleep and winning the match for the Wyatt family. In the aftermath, Reigns and Ambrose wanted to thank Jericho for helping them only to have Jericho pull that famous Jericho move in being a huge ass-clown and not showing any love for Ambrose and Reigns. It will be interesting to see what happens in the coming episodes of Raw with this.

Not only is Seth Rollins the current WWE champion, but he was also the USA champion, which he took a few months ago from Cena, due to Jon Stewart (yes that one from the Daily Show), interfering in a match and winning the USA title for Rollins. It was a fantastic move. This was easily the BEST match of the night and once again proved that Seth Rollins is literally the best wrestler in a long time. The guy is just so agile, strong, high-flying, and great on the mic, that nobody really holds a candle to him. He did the five star frog splash, which was met with an ‘Eddie’ chant, flipped out of a ton of finishing moves from John Cena, and even was able to Cena “U Can’t C Me”. 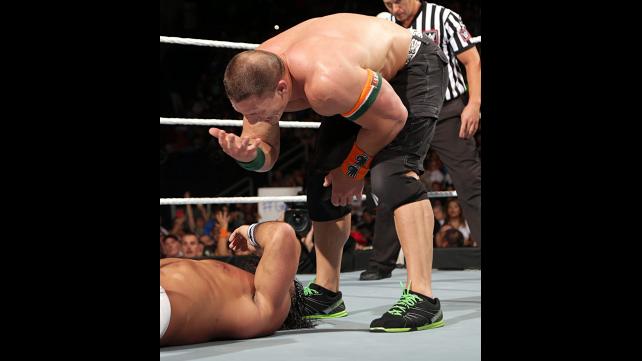 There is nothing that Rollins can’t do. On the other hand, Cena did a pretty great job too here, performing some new moves, rather than his tired and usual schtick from the past decade or more. This match had a good story and plenty of moments where I thought it was over, only to have one of the two superstars count out at two. In the end, Cena was able to give Rollins another Attitude Adjustment for the win and the USA belt, which is okay by me. This will allow other wrestlers to get a push from Cena into the primetime. 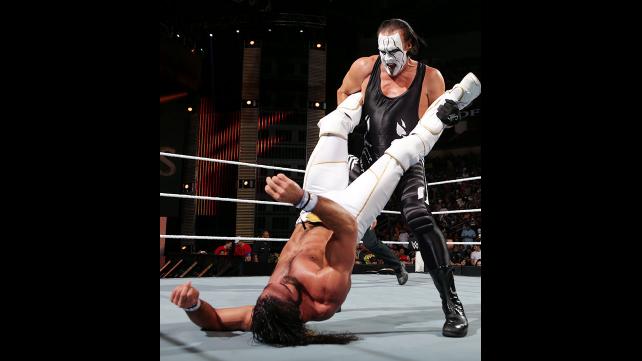 Rollins, tired and beat up from Cena in the match before, was forced once again to fight Sting in the ring. Sting came back again from losing at Wrestlemania against Triple H, and showed up a few weeks ago to give Seth Rollins some slight agitation by taking his life size statue and destroying it. So dumb. It was like watching the best wrestler in the business right now fight an aging senior citizen. It literally looked like Sting was going to die in the ring, even having a ring side medic get into the ring and see if he was alright. 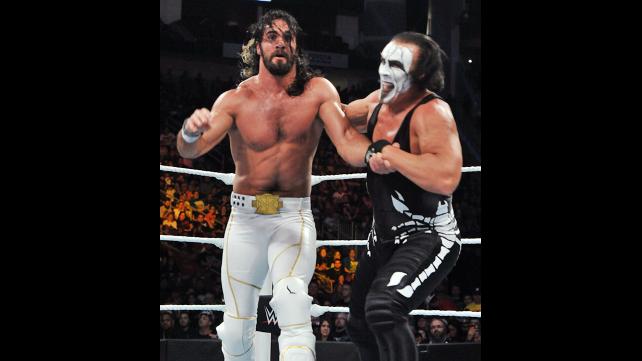 Even the ending of the match was quick and sudden. Sting shouldn’t be wrestling. It was a joke and a punch to the gut to the guy in the back locker room to have Sting take the main event like this. Of course Sting won easily, which was when things got interesting. Once the match ended and Rollins was tired and ready to go home, Sheamus ran out and tried to cash in his money in the bank match contract to defeat Rollins for the title, but before they could ring the bell for that match to start, Kane came back – mask and all and choke slammed Rollins and Sheamus, telling the WWE Universe that he’s back from Hawaii and vacation, and ready to bring hell with him, or at least be the Authority’s errand boy again.

In the end, Rollins is still the champion – Thank the Gods, Charlotte is the new Diva’s champion, Cena once again has the USA title, Owens has the IC Champion belt, and The New Day and The Dudley Boyz will continue their feud, which is okay by me.

I just hope that Sting is in fact okay in real life, but please don’t have him wrestle again, at least in the main event. It’s sad, pathetic, and NOT entertaining. That being said, the next Pay Per View ‘Hell in a Cell’ in Los Angeles on October 25th will have Brock Lesnar and Undertaker battling again in a Hell in a Cell match. This could be epic.