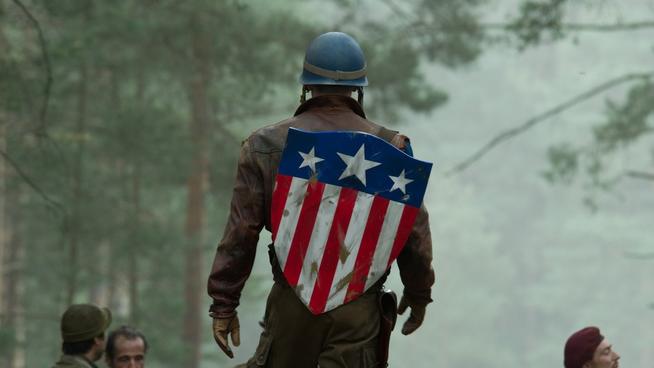 It’s that time of year again. Time to celebrate the founding of this nation by eating excessively and purchasing enough fireworks to create man-sized craters in the pavement. In honor of this time, here’s a list of the most ‘Murican movies ever. This isn’t a list of patriotic movies (though some of these could be seen as patriotic), so you aren’t going to see Saving Private Ryan or other true patriotic movies on here. This list focuses on those things that make America into ‘Murica – extreme excess and over-the-top…well, everything! [Cue eagle screech] 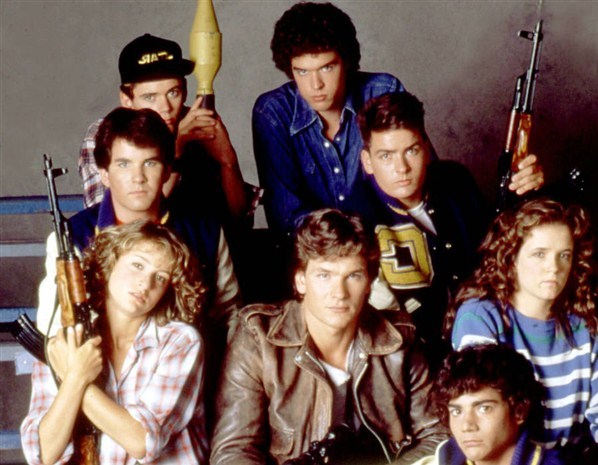 Starting the list is the plucky group of American freedom fighters known as the “Wolverines”. Sure they are teens, but they are teens with guns and a whole lot of anger. It’s all up to them to save America from those pesky Russians. This time, the stakes are even higher as the battle is being fought on American soil. Someone should have reminded those Commies that guns are found around every American shop corner and every American teenager is proficient with them. Ain’t nobody gonna take America from them – not when they have Patrick Swayze and Charlie Sheen all hopped up on tiger blood and winning!

Jed Eckert: How did you get shot down, Colonel?

Col. Andy Tanner: It was five to one. I got four.

While this movie may not expressly have America as a focal point, it does have ‘Murica written all over it. Countless unnecessary explosions? Check. More guns than arms capable of carrying them? Check. Every action star from ‘Murica’s Golden Age of film? Check. Testosterone-filled one-liners? Check. If any film truly captures the essence of Murica’s obsession with over-abundance it’s this one. Every single line and scene scream Murica, it’s surprising that the characters aren’t wearing matching flag apparel.

Hale Caesar: [holding his AA-12 shotgun] You know, the enemy’s always been terrified of noise, especially shotguns. With this big boy spitting out 250 rounds a minute, you tell me who’s tolerating that. Absolutely zero.

This list wouldn’t be complete without at least one movie based on the Revolutionary War. Before Mel Gibson snapped, he treated the world to the most historically inaccurate rendition ever filmed. But that’s alright, accuracy doesn’t matter when you have a father putting it all on the line to save his family. What’s more ‘Murican than that? Plus, this film really lays it on thick with the villainy of the British. Contrast this with a 21st century mentality among the American troops, sprinkle some testosterone-fueled dialogue and you have the makings of an action-packed ‘Murican movie.

Benjamin Martin: Before this war is over, I’m going to kill you. 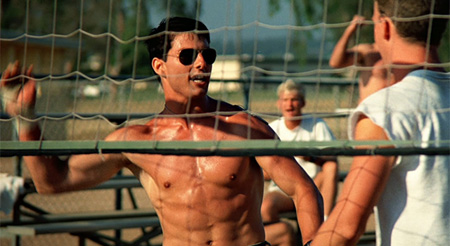 If you are surprised to find this movie on this list then you haven’t been paying any attention. You take a charismatic character with no regard for authority and a penchant for watching things blow up and you have the perfect combination for ‘Murican cinema. Add to it an unnecessary volleyball montage and a battle of testosterone between the two best pilots in the film and you have a recipe for success. With as little regard for authority as Maverick has, it’s amazing he was never kicked out or simply arrested! And don’t forget to add a quest for vengeance. Poor Goose.

Stinger: Don’t screw around with me Maverick. You’re a hell of an instinctive pilot. Maybe too good. I’d like to bust your butt but I can’t. I got another problem here. I gotta send somebody from this squadron to Miramar. I gotta do something here, I still can’t believe it. I gotta give you your dream shot! I’m gonna send you up against the best. You two characters are going to Top Gun. 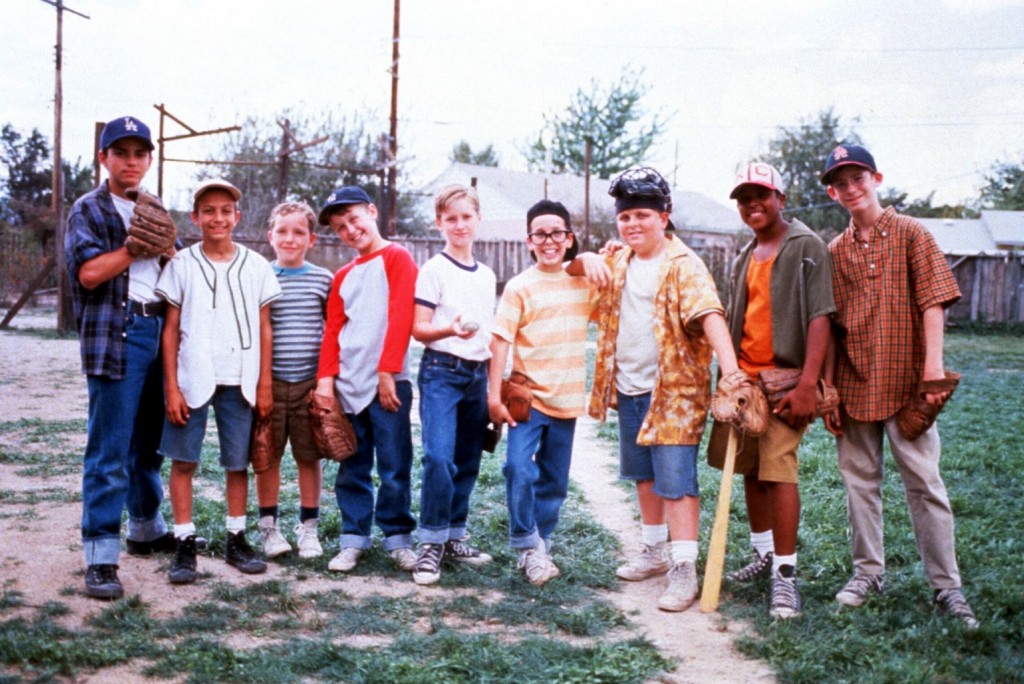 Not every movie on this list has to include violence and explosions. The Sandlot is as ‘Murican as apple pie and, well, baseball. What’s more ‘Murican than a bunch of pre-teen boys getting together, talking trash, hitting on girls, and playing the most American game in existence? It was a simpler time; a time when neighborhood kids could stay out all hours without worrying their parents. It was a time of character building and sports. It was a time when the biggest fear you had was the neighbor’s terrifying dog – especially when that neighbor happens to be Darth Vader!

Narrator: Michael Squints Palledorous walked a little taller that day. And we had to tip our hats to him. He was lucky she hadn’t beat the *crap* out of him. We wouldn’t have blamed her. What he’d done was sneaky, rotten, and low… and cool. Not another one among us would have ever in a million years even for a million dollars have the guts to put the move on the lifeguard. He did. He had kissed a woman. And he had kissed her long and good. We got banned from the pool forever that day. But every time we walked by after that, the lifeguard looked down from her tower, right over at Squints, and smiled.

Bruce Willis, NASA, faulty science, the flag, and a can-do attitude (regardless of any actual ability) all add up together to give the world Michael “explosion” Bay’s version of ‘Murica. Follow along as NASA places the hope of the world on deep drillers with a twelve day crash course on astronaut training. Who cares that it is completely improbable and laughably absurd. Everything about this film screams ‘Murica. The only way this film could have been more ‘Murican is if a bald eagle landed on Ben Affleck’s shoulder at the end. Having not seen the director’s cut, this actually can’t be ruled out.

Ronald Quincy: I know the president’s chief scientific advisor, we were at MIT together. And, in a situation like this, you-you really don’t wanna take the advice from a man who got a C- in astrophysics. The president’s advisors are, um… wrong… and I’m right. 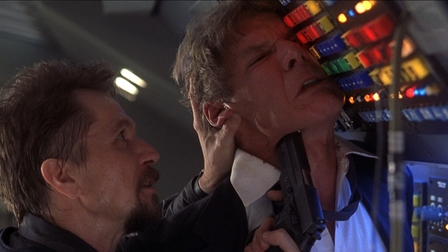 If there’s one thing ‘Muricans hate, it’s terrorists. If there’s one thing ‘Muricans love, it’s hard-nosed leaders who don’t take crap from anyone (especially terrorists). What happens when you put them in the same movie? ‘Murican cinema magic, that’s what. Plus, there’s no enemy ‘Muricans hate more than the Russians! This film is so full of realistic improbabilities and over-the-top dialogue that you can’t help but root for the President as he takes on the terrorists all by himself in true ‘Murican fashion! These terrorists should have known better than to threaten his family and his baseball glove!

Ivan Korshunov: When you talk to the President, you might remind him that I am holding his wife, his daughter, his chief of staff, his national security advisor, his classified papers – and his baseball glove! 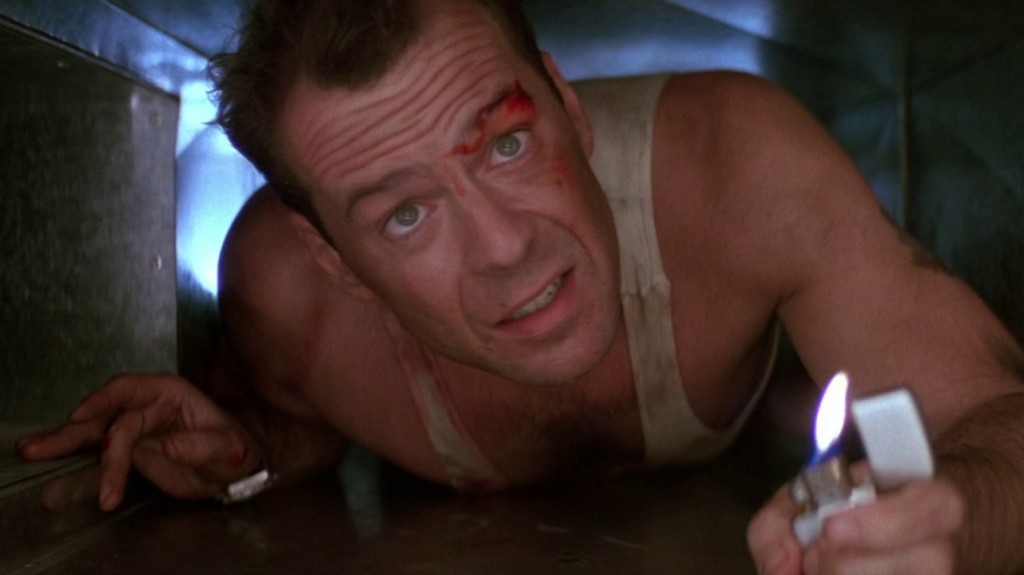 Something about this movie just screams ‘Murica. Maybe it’s the blue collar hero. Maybe it’s his memorable one-liners. It could be his willingness to take out the terrorists by any means necessary – especially when it involves explosions and disobeying authority. More than likely, it is all of the above. You should be sensing a theme by now. Terrorists don’t stand a chance when a true ‘Murican comes at them single-handed – especially when that ‘Murican is directly disobeying orders! It’s a cliché akin to splitting up in a horror movie – you just know somebody is going to die!

Hans Gruber: Uh, no, I’m afraid not. But, you have me at a loss. You know my name but who are you? Just another American who saw too many movies as a child? Another orphan of a bankrupt culture who thinks he’s John Wayne? Rambo? Marshal Dillon?

John McClane: Was always kinda partial to Roy Rogers actually. I really like those sequined shirts.

Hans Gruber: Do you really think you have a chance against us, Mr. Cowboy? 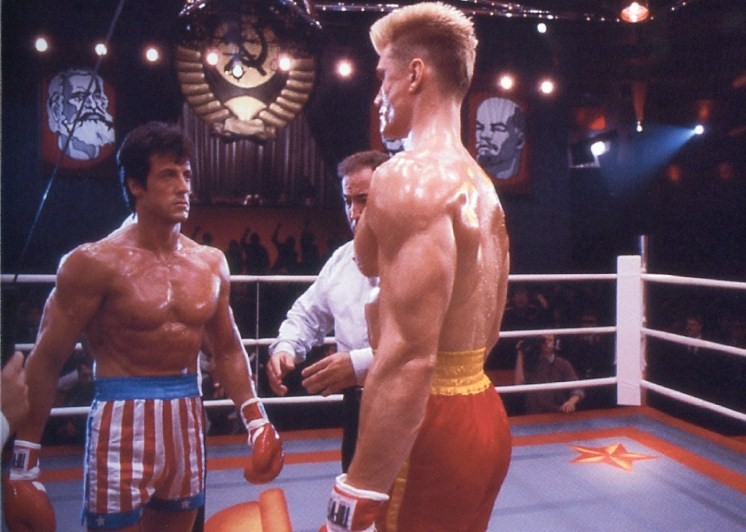 This movie practically oozes ‘Murica out of every one of Sylvester Stallone’s sweaty pores. Remember that time in your history class when you learned about how one boxer, wearing star-spangled shorts, single-handedly defeated communism and toppled an empire? No? You must not have been paying attention! Using nothing but his fists, ridiculously toned abs, and an iron will, Rocky turned an entire country into American supporters simply by allowing a giant to pummel the crap out of him for fourteen rounds (before winning it in the 15th round). It’s a good thing the referees in this film had zero concern for his (or Apollo’s) safety. 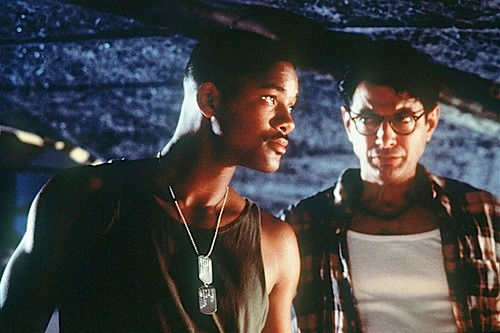 Will Smith battles aliens, joins forces with a lazy genius, and saves the world. Between blown up hippies, blue-collar heroes saving the day, and the rest of the world sitting on their butts waiting for America to lead the charge, there is no doubt this film deserves to be the top spot on this list. It isn’t coincidence that the aliens decide to attack on the fourth of July. They clearly hadn’t been paying attention to television (or this list), otherwise they would have known what a mistake that was. Once again, the hero happens to be a talented warrior with a knack for ignoring authority. Massive explosions, violence, and laughable science (It’s a good thing the alien tech was compatable with our laptops). Don’t forget the President’s speech that was so fundamentally ‘Murican that it made everyone want to go out and purchase all the American flags they could find. This film has it all!

President Whitmore: Perhaps it’s fate that today is the Fourth of July, and you will once again be fighting for our freedom… Not from tyranny, oppression, or persecution… but from annihilation. We are fighting for our right to live. To exist. And should we win the day, the Fourth of July will no longer be known as an American holiday, but as the day the world declared in one voice: “We will not go quietly into the night!” We will not vanish without a fight! We’re going to live on! We’re going to survive! Today we celebrate our Independence Day!

‘Return of the Living Dead’

Suicide: You think this is a fuckin’ costume? This is a way of life.