From start to finish, Tammy had me. Had me laughing hysterically that is. I was in tears from when the opening scene started with the Outfield playing loudly in a boombox in a beat up Corolla being driven by Melissa McCarthy in a fast food uniform. She slams into a deer on her way to work at her dead end job, and well, it only gets funnier from there. This movie was made for McCarthy, literally, by her husband Ben Falcone and McCarthy herself, and it shows their combined comic talents.

Ben Falcone also directs, and who knows her better than her husband? Melissa McCarthy plays Tammy, a run down housewife in a crappy job, in a crappier marriage and has a life going nowhere. She gets fired from her job for being late, and makes it home to encounter her husband living a totally different life with the neighbor lady, played not so demurely by Toni Collette in a wasted role. She gets very little screen time, and I bet their scenes were cut for timing, but I digress.

The real winner of this storyline is that now she is fired, there is nothing holding her to the town, so she heads next door to her mom’s house, played by Allison Janney (who I LOVE), and she begs for the keys to her car. She tells her no, so she says she gonna take her grandma’s car. This is where things get nutty. Her grandma overhears all of it and says fine, and she’s coming with her. Did I mention that grandma is Susan Sarandon in a scene stealing role? I mean it. 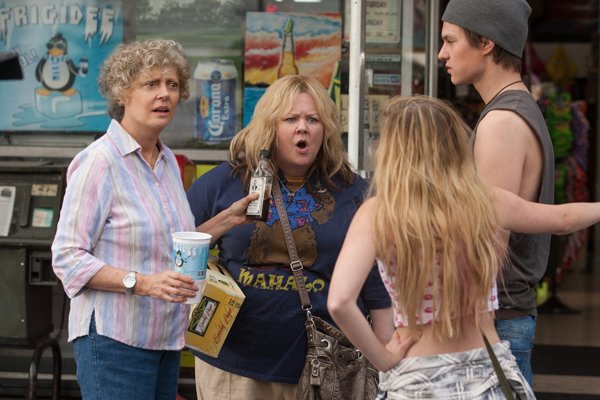 She is downright genius and amazing and looks just phenomenal. I had no idea that she had that kind of comic timing! So with $6700 in cash and a Cadillac, Tammy and Grandma hit the road and head to Niagra Falls. Or so they say. There is lots of silliness along the way, and cameos by Kathy Bates and Sandra Oh, and they are fab. Our male lead is Mark Duplass. I loved him in “Safety Not Guaranteed” and I am equally glad that he does not disappoint in “Tammy.”

There are some plot holes, as I love to say, but hey, it’s unavoidable. They are small, unless you are looking for a movie that is seriously going to change your life. This is just good down home hilarity, and looking at it as something else ruins it. I give it a good 3.5 stars, and encourage those to see it, just for the scenes with Susan Sarandon in the liquor store. She is, still, just breathtaking!