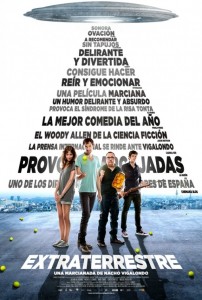 ‘Extraterrestrial’ is reminiscent of the 2010 film ‘Monsters’, in that it is more a story about the relationship of two individuals than the giant monsters/aliens that get top billing. The monsters and aliens merely serve as an elaborate backdrop to the real story – the love story.  But unlike ‘Monsters’, which was a serious drama, Vigalondo applies this story-telling technique to the ‘rom-com’ genre.  I was skeptical, but Vigalondo pulled it off.

We first meet Julio (Julian Villagran) when he wakes up in a stranger’s bed after a night of heavy drinking.  He hears noises coming from the other side of the bedroom door and when he goes to investigate, he is relieved to find a beautiful woman making coffee.  After formal introductions, he confirms that they had a drunken one-night affair, that her name is Julia (Michelle Jenner), and that she expects her live-in boyfriend Carlos (Raul Cimas) to return at any moment. While trying to get Julio out before Carlos returns, they realize that the phone lines are down, the television is not broadcasting, and the clocks have stopped. They look out the window to find the city deserted and one enormous city-sized UFO hovering over-head.

Having passed out from their night of debauchery, they had missed the alien invasion and the government evacuation.  Suddenly, Carlos bursts in through the doors seeking shelter.  When Carlos questions why Julio is in the apartment, Julia lies and says she found him passed out on the street and dragged him into the apartment to save his life. Carlos believes this story and immediately takes a liking to Julio. Julio and Carlos barricade the entrances to the apartment.  Stuck under the same roof, Julio and Julia grow fonder of each other, while Carlos becomes more insane with fear.  To get him to leave, they persuade Carlos that the aliens are roaming the streets taking human form.  Carlos heads out to start blowing up buildings and attack those he thinks are aliens in disguise. 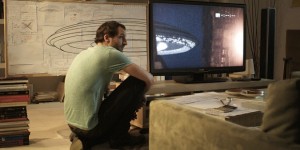 One of the highlights of this movie is that Carlos isn’t a bad guy.  Unlike most romantic comedies where the unaware boyfriend comes across as a jerk and the audience practically roots for the betrayal, Carlos is quite the opposite.  He genuinely cares for both Julia and Julio. He is kind, trusting, and an all-around good guy. And when Julio and Julia’s lies become even more outlandish, Carlos continues to believe them wholeheartedly, so much so that he is willing to risk his life (so he thinks) to save them and the world.

‘Extraterrestrial’ was a delight to watch.  The special effects are minimal, but since the aliens are merely a backdrop, the flying saucer visuals are all you need.  Instead of a sci-fi film, we are treated to a light-hearted, yet dark comedy about romance and friendship.  If you’re looking for an action-packed alien invasion film, this is not for you.  But if you are a fan of quirky romantic comedies with a unique twist, you should give this film a try.