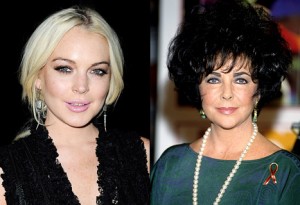 We’ve been hearing for months now that Lindsay Lohan has been vying to play Elizabeth Taylor in ‘Liz and Dick’ for the Lifetime channel.  It’s he biopic chronicling the enduring love of movie icons Taylor and Richard Burton, whose fiery romance was the most notorious, publicized and celebrated love affair of its day.  Well today it became official.  I guess the execs don’t care about Lohan’s troubled past or they got a huge insurance policy on her.  Either way, I think they could have picked a better actress.  Press release below.

Lindsay Lohan is set to star as the legendary Elizabeth Taylor in the Lifetime Original Movie Liz & Dick, based on the true story of the screen icon’s historic romance with actor Richard Burton.  Principal photography on the movie will begin in early June in Los Angeles, it was announced today by Rob Sharenow, Executive Vice President, Programming, of Lifetime Networks.

For nearly a quarter of a century, Taylor and Burton were Hollywood royalty and their fiery romance — often called “the marriage of the century” — was the most notorious, publicized and celebrated love affair of its day.  Swarmed by paparazzi, Taylor and Burton’s love affair was played out entirely in front of the global press from the time they met on the set of the major motion picture Cleopatra, left their respective spouses, married and divorced, only to remarry and divorce once again.  Despite their roller coaster romance for the public eye to see, Taylor and Burton shared an undeniable love greater than most people could have ever dreamed.

Regarding the announcement, Lohan said, “I have always admired and had enormous respect for Elizabeth Taylor.  She was not only an incredible actress but an amazing woman as well.  I am very honored to have been asked to play this role.”

“We are thrilled Lindsay will portray beloved Hollywood legend Elizabeth Taylor,” added Sharenow.  “She is one of the rare actresses who possesses the talent, beauty and intrigue to capture the spirit of such a provocative icon.”