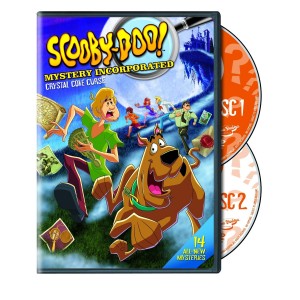 The good folks at Warner Bros. have given us all new Scooby Doo episodes under the ‘Mystery Incoporated’ label.  The original first season had twenty six episodes.  This is the second part of the first season, so we get the latter fourteen episodes which is called the ‘Crystal Cove Curse’.  So these are not original cartoon episodes, but rather new ones, and I actually had a good time with them.  I think if you are a fan of the original series, then I suggest you take a look at these.

“The adventures of a talking dog and his four human pals as they try to unravel the strange and haunted history of their hometown. The tone is comedic, but it will never lose the edge that our heroes are in some frightening situations. The stakes are real. ”  Episodes include: When the Cicada Calls, Mystery Solvers Club State Finals, The Wild Brood, Where Walks Aphrodite, Escape From Mystery Manor, The Dragon’s Secret, Night Fright, The Siren’s Song, The Menace of Manticore, Attack of the Headless Horror, A Haunting in Crystal Cove, Dead Justice, Pawn of Shadows, and All Fear the Freak.  Some of my favorite episodes are: The Wild Brood, All Fear the Freak, and Night Fright.  I like that the same curse that ruffled the feathers of the original Mystery Incorporated is now back again with a vengeance. I still prefer the original episodes to these, but the new episodes hold their own.  Maybe it’s just because I grew up with the originals. 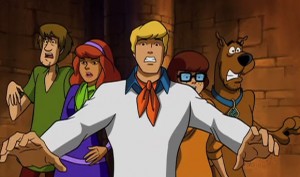 The video is in standard definition and presented in 4×3 full frame.  These episodes look really good.  Since these are not original old episodes, btu rather new ones, they look a hell of a lot crisper, brighter, sharper, and more clear.  The colors look great and just pop.  Great job here.  The audio has a stereo surround mix and sounds really decent.  The dialogue is clear and the sound effects and ambient noise are clean and sound good on the speakers.  I’d prefer the lossless audio, but all the spooky sounds flow and pop nicely.  Really good job here. 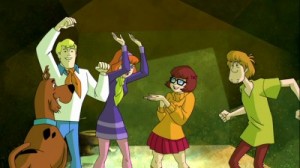 This new batch of episodes from the Scooby gang are quite a bit of fun.  While it doesn’t ring home for me, I still found a lot to love with it.  The video and audio are great and of course the episodes are a great time.  You can get this straight from the WBShop for less than $19.00 or over at Amazon.com for $14.99.  This is a decent price and if you’re a fan of Scooby, then I’d pick this up for this price.