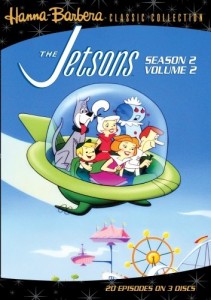 Here is your favorite family of the future, ‘The Jetsons’.  This release is the second part of the 2nd season.  It boasts three discs with 20 episodes in all.  This is another made to order gem from the good folks at Warner Bros. who have graciously put out a great DVD to showcase the lovable Jetsons.  There are some excellent episodes on this release, so take advantage and re-live those glory days with the family of the future.

“Legendary animation studio Hanna-Barbera’s first family of the future – The Jetsons! – return in this second part of their sophomore season collection. Strap in alongside George, Jane, Judy, Elroy, Astro and Rosie and go soaring into their fantastic world of rocket cars, rocking robots and cranky computers. The once and future fan favorite family stands ready to show us that wherever or whenever you live, people, love and laughs are still the same. This 3-Disc, 20 Episode Collection features more science fiction, slapstick and silliness than you can shake a Spacely Space Sprocket at!”  The episodes include: One Strike, You’re Out, Dance Time, Judy Takes Off, Winner Takes All, High Moon, Hi-Tech Wreck, Little Bundle of Trouble, Elroy in Wonderland, The Swiss Family Jetsons, Space Bong, The Vacation, Team Spirit, Dog Daze Afternoon, Grandpa and the Galactic Goldigger, Robot’s Revenge, To Tell the Truth, Boy George, Judy’s Elopement, The Century’s Best, and A Jetson Christmas Carol.  Some of my favorite episodes on this disc are: Space Bong, Dog Daze Afternoon, and Elroy in Wonderland.  But really all of  the episodes are gold.  The christmas episode was a lot of fun too.  Definitely recommend this release if you’re a fan of the great futuristic cartoon. 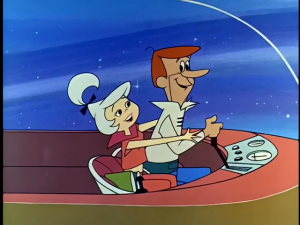 The video is in standard definition and presented in 4×3 full frame with a 1.37:1 aspect ratio.  These episodes definitely look better than they did on my old tube television.  It still had that grain and filmic quality to it, but it looked a bit cleaned up.  The colors look great and just pop.  Great job here.  The audio has a stereo mix and sounds as good as it can sound.  It all still sounds pretty raw, but that’s not necessarily a bad thing.  The dialogue is clear and the sound effects and ambient crazy noises and sounds bounce off everywhere.  The audio does seem a bit flat, but maybe one day we will get a bluray release with lossless audio. 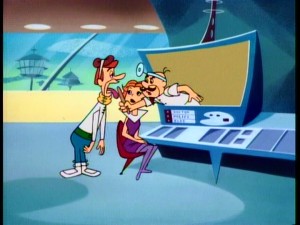 This is a great addition to add to your animated collection.  The episodes are wonderful and on the whole, the discs look and sound good.  This is the best yet The Jetsons have looked by far.  This release is pretty pricey.  So I only recommend this to hardcore fans.  The WBShop is selling it for around $30.00 while Amazon.com is selling it for $36.00.  I know these sets are made to order, so there aren’t many around, but for those prices, yo ucan get a HBO bluray series.