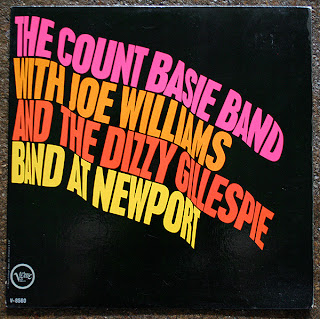 Like a good scotch I like a good Jazz record. Smooth, with a sophisticated bite, or with a little bit of age so as to taste and savor a bit of the barrel’s flavor and characteristics. I enjoy these these qualities in my Jazz records, too, and Verve Records has been known to be a fine label when it comes to Jazz music; sophisticated and exciting all within the same rhythm of breath and beat.

One such Jazz record of note is Verve’s split LP “The Count Basie Band with Joe Williams & The Dizzy Gillespie Band at Newport,” highlighting both band’s extraordinary sets from the 1957 Newport Jazz Festival. The record opens with a bang of a climax on “Blee Blop Blues,” poising the listener’s ears for something great on the downslope. The band switches gears just a bit on the follow-up track, “Alright, Okay, You Win” as singer Joe Williams belts out note for note with a commanding presence of blues gusto. 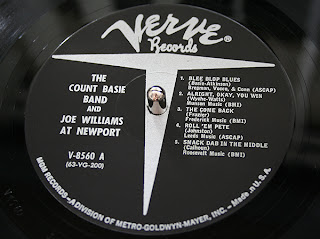 Though bebop and more progressive forms of Jazz were prevalent at the time, The Count Basie Band was enjoying a hefty renaissance with Williams at the vocal helm in the 1950s. The additional song selections performed on this record, “The Comeback”, “Roll ‘Em Pete” and “Smack Dab in the Middle” all are all great indicators of, not only Williams’ stature as a blues shouter/singer, but also Basie as a legendary swinging jazz composer, pianist and band leader.

The contents of the LP varies wonderfully well on both sides of the record, as the side two opens with the ironically titled “Dizzy’s Blues,” a lengthy exercise in fast tempo bebop goodness that has no hint of traditional blues what-so-ever. The crowd goes noticeably wild over Gillespie’s inventive note for note assault on the music, and the backing band has no trouble keeping up. “School Days (When We Were Kids)” is a lighthearted diatribe of blended children’s nursery rhymes set to a swinging blues rhythm, evoking Gillespie’s humorous side as a performer and showman. Though his performance at Newport the Summer of 1957 would be his first, Gillespie sounds as though the and the festival are old friends. 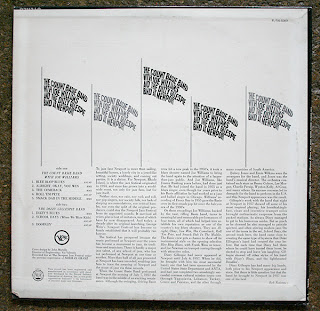 There is one other important factor when it comes to good Jazz records: the cover art. Jazz records are notorious for displaying the most impressive designs and artwork on its LP covers, and I think this record is no exception. The colors and wave design of the text are as free-flowing as the music contained within its cover. It’s not until you flip the cover over that you realize the wave reflects the look of the flags that would surround the festival grounds. Artist John Murello’s design almost borders on the psychedelia poster style that wouldn’t become prevalent until the mid-1960s. The bold colors against an empty and dark background definitely grab your attention and says “Give me a spin or two.”

Newport must have been a magic place to experience in the 1950s and 60s. “At Newport” serves as a great hor d’oeuvres to anyone who is curious to know what it must have been like to be a spectator in its heyday. There is no shortage of brilliance from either of these legendary bands, not that you would expect any. What I enjoy most is how both bands come from different ends of the Jazz spectrum only to arrive together in the center, both creatively and inspirationally. Call it swing or bebop, or whatever you want, it’s good all around no matter the title.And the great thing is Newport Jazz Fest is still going strong since 1954.