‘ SING YOUR SONG’, CHRONICLING THE LIFE AND TIMES OF HARRY BELAFONTE, DEBUTS OCT. 17, ON HBO!!! 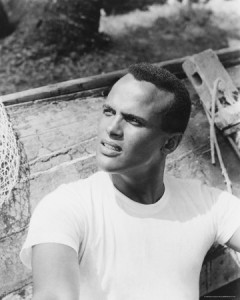 I am just loving these musician documentaries.  The first half of the George Harrison doc has been amazing.  Looking forward to the second part tonight.  And now  Harry Belafonte is getting a documentary on his life and career.  Most of you might know Belafonte as the guy who sang ‘The Banana Boat Song’ which features the lyric “DAY-O”.  It was featured in the film ‘Beetle juice’.  I’m very excited for this doc as I am a huge fan of Belafonte.  I remember watching the making of Michael Jackson’s ‘We are the World’ music video and during the rehearsal, all of the singers and musicians just randomly started singing ‘The Banana Boat Song’ along with Harry Belafonte himself.  It was magical.

During the course of an inspiring life that has paralleled the American civil rights movement, artist and crusader Harry Belafonte has tirelessly used his humanitarian influence to advance causes of social justice, while forging a unique career punctuated by prestigious awards and industry firsts.

Coinciding with the HBO debut of SING YOUR SONG, Belafonte’s memoir, “My Song,” will be published by Knopf Oct. 11 while a companion music album, entitled “Sing Your Song:  The Music,” was released by Sony Masterworks Oct. 4.

Groundbreaking singer, actor and activist Harry Belafonte rose to fame in the U.S. in spite of segregation, and crossed over into mainstream America on his way to international stardom.  His hit 1956 album “Calypso” made him the first artist in industry history to sell over a million LPs, and spawned the smash single “Banana Boat (Day-O).”  Though recognized with Grammy, Tony and Emmy® awards, Belafonte was blacklisted, harassed by the House Un-American Activities Committee (HUAC), spied on by the CIA and FBI, and threatened by the Klan, state troopers and Las Vegas mafia bosses.

Distilled from more than 700 hours of interviews, eyewitness accounts, movie clips, excerpts from FBI files, and news and rare archival film footage and stills, some of which has never been seen before, SING YOUR SONG reveals Belafonte as a tenacious hands-on activist who worked intimately with Dr. Martin Luther King, Jr., mobilized celebrities for social justice, participated in the struggle against apartheid in South Africa and took action to counter gang violence, prisons and the incarceration of youth.

Following an early performance by Belafonte at the Village Vanguard in New York City, his mentor, the great singer and actor Paul Robeson, offered this counsel:  “Get them to sing your song and they will want to know who you are.”

Born into a rough Harlem neighborhood in 1927, Belafonte’s immigrant mother sent him to be raised in her native Jamaica in an effort to ensure his safety; there he developed a cultural reservoir on which to build future artistic success.  Upon the outbreak of World War II, he returned to Harlem, and later enlisted in the United States Navy, serving for almost two years as a munitions loader.

Returning to New York City, Belafonte worked in the garment center and as a janitor’s assistant.  As gratuity for one apartment repair job, Belafonte was given a ticket to a production of “Home Is the Hunter” at the American Negro Theatre (ANT) in Harlem, which sparked a desire for a life in the performing arts.

Joining the Dramatic Workshop of the New School of Social Research under the tutelage of renowned German director Erwin Piscator, Belafonte attended class with fellow future stars like Marlon Brando, Walter Matthau, Bea Arthur, Rod Steiger and Tony Curtis.  He immersed himself in the world of theatre and found “a place of social truth and profound influence,” compelling him to make a commitment to use art as a source of inspiration to others, as well as an instrument of resistance and rebellion and a counter to racism.

Paralleling his pursuit of acting, an interest in jazz spurred him to develop a relationship with pioneers of the art form.  In his first professional appearance, he performed with jazz titans Charlie Parker, Max Roach, Tommy Potter and Al Haig as his “back-up band.”

His first Broadway appearance, in “John Murray Anderson’s Almanac,” earned him a Tony Award.  As the first black producer in television, he won an Emmy® for his network production of “An Evening with Belafonte,” directed by Norman Jewison.  At the dawning of his film career, “Carmen Jones” took top critical honors, garnering two Oscar® nominations and winning the Golden Globe award for Best Motion Picture (Musical/Comedy).

In SING YOUR SONG, Belafonte observes that while building a career, raising a family and enjoying his successes, there were always the larger concerns for freedom, justice, equality and human dignity.  Since childhood, his mother impressed upon him that he should never awaken in a day when there wasn’t something on his agenda that would help set the course for the undermining of injustice.  That larger concern at the center of his life and work connected him deeply with his mentor Robeson, a renaissance man of immense talents who sacrificed everything in the fight for freedom and justice.

Belafonte’s compassion and ardor also drew him to Dr. Martin Luther King, Jr., who once said of his friend, “Belafonte’s global popularity and his commitment to our cause is a key ingredient to the global struggle for freedom and a powerful tactical weapon in the civil rights movement here in America.  We are blessed by his courage and moral integrity.”

Like Robeson before him, Belafonte has paid a price for his activism.  Rather than compromise with bigotry and prejudice, he walked away from the money and exposure that compromise would have afforded him, for example, when sponsors of the groundbreaking and hugely popular television specials “Tonight with Belafonte” (1959) and “Belafonte, New York 19” (1960) balked at his racially integrated casts.  Similar battles with Hollywood film producers over content and race led him to turn down other lucrative offers.