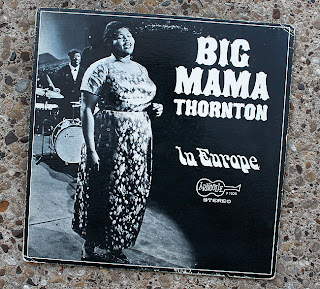 The era of the power-house female blues singer is long gone. Bessie Smith. Janis Joplin. Memphis Minnie. Big Maybelle. But, one of the absolute greats here is Willie Mae “Big Mama” Thornton, whose blues will absolutely shake you to your foundation.

Outside of hardcore blues fans Big Mama Thornton is probably one of the more obscure of the blues singers, as her career began in 1951, but started to fade quickly in the late 1950s/early 1960s. However, Thornton recorded with some of the most notable blues musicians of her day, many now legendary, like Buddy Guy, Mississippi Fred McDowell, Muddy Waters and Big Walter Horton.

In 1965, while on tour with the American Folk Blues Festival in Europe, Thornton and her backing band that consisted of mostly Chicago Blues artists (Buddy Guy, Fred Below, Eddie Boyd, Jimmy Lee Robinson, Fred McDowell) cut “In Europe” in an English recording studio for Arhoolie Records. 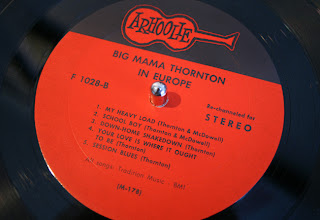 Most of what you hear on “In Europe” is some straight, late-night traditional blues cuts like “Sweet Little Angel”, “Little Red Rooster” and the tune that made Thornton famous before Elvis Presley, “Hound Dog”. Thornton rips through these tunes with a ferocity only meant for her vocals, accompanied by Guy’s smooth 12-bar guitar licks and Walter “Shaky” Hortons Cadillac-like harmonica. If Mahalia Jackson picked up the blues instead of gospel this is what the angel herself would sound like.

The stand-out tracks (as if all of “In Europe” doesn’t stand out) are the Thornton/McDowell originals of “My Heavy Load” and “School Boy”, stripped down from a rocking Chicago sound to simple vocals and slide guitar, bringing the record and interesting audible valley of woe and simultaneous excitement. 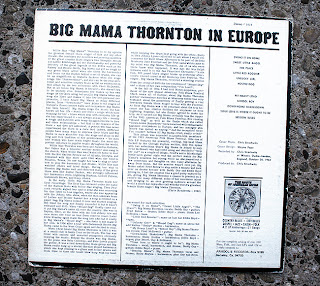 Thornton and her band pepper things back up on the follow-up instrumental, “Down-Home Shakedown”, featuring Thornton and “Shakey” Horton on dueling harmonicas, Boyd on pumping organ, along with Guy, Below and Robinson to round out the rhythm section. If that weren’t enough to get you swinging from the rafters, “Your Love Is Where It Ought to Be” and “Session Blues” close out the album, but leave you yearning for more. Thornton surprises even further on “Session Blues” while providing vocals and drums for the song, making her quite the triple threat.

“In Europe” is such a musical treat for the soul, and isn’t just one of those random blues compilations you’ll find in the used bin. This collection of recordings demonstrated at the time to Europeans just how much of a treasure American Blues was, which proved the success and fervor of the blues tour at the time. “In Europe” also demonstrated that Thornton, no matter who was backing her, would live on as a legend of the blues, and can swing with the best of them.

“In Europe” was originally released in mono, as most records were in those days, but the record reviewed here is a re-channeled stereo version, which was release subsequently. As blues records in Mono are my personal preference, the ‘fake stereo’ version here has a some-what rawer sounding quality than its mono counterpart, giving the recordings a harsher glory deserving of Thornton and her band.

This album did see a CD release with several bonus tracks and an exclusive interview with Arhoolie Records founder, Chris Stratchwitz, making the CD version definitely worth the purchase. However, what is notoriously cool about Arhoolie Records is that you can still purchase a lot of their back catalog on vinyl, such as “In Europe”. The re-channeled stereo version is available here, but in limited quantities, as the album has long since been out of print.

If after hearing “In Europe” for yourself doesn’t convince you of Big Mama Thornton’s prowess and status as a bonafide blues legend, then obviously blues isn’t your thing. Her influence on Janis Joplin alone makes Thornton’s relevance that much more staggering. But, don’t take it from me. I think your ears and Big Mama will convince you earnestly.