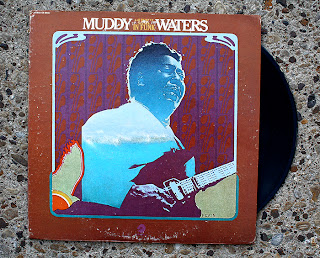 It’s been long disputed who is the actually ‘King of the Blues’, even more so when it comes to Chicago Blues. I like the blues no matter where it comes from, rich or poor, black or white, but no matter  who ends up taking the crown Muddy Waters will always hold one of the top spots in my record collection.

There’s been some major staples in Muddy Waters’ catalog over the decades, like “Electric Mud” and “Folk Singer”, but this lesser-known jewel called “Unk” In Funk is another classic that deserves proper recognition.

At the time of the 1970s when the majority of Chess blues players were increasing the electric sound of their music, Muddy Waters was going back to a more stripped-down sound on his records, where the bass, drums, harmonica and vocals really led the ship. Though Waters had already been doing the ‘electric thing’ with the blues in the late 1960s, this later version of Waters really put his sound back in the country. 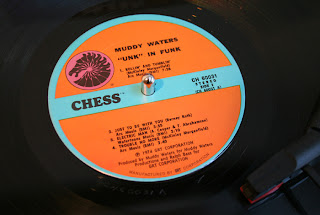 “Unk” is a fantastic little record of some of Water’s best recordings. It opens up with the shark-sized guitar hook of “Rollin’ And Tumblin’, the only predominantly electrified recording on the entire record. “Electric Man” and the “should-have-been-jukebox-favorite-of-everyone” “Katie” serves up pure signature Chicago Blues with the help of Carey Bell Harrington on harmonica and the late Pine Top Perkins on piano.

Many of the tracks on “Unk” are classic Waters  recuts, like “Trouble No More”, along with new songs like the blistering “Waterboy Waterboy”, and covers such as “Everything Gonna Be Alright” and “Just To Be With You”. The legendary Paul Oscher lends his harmonica to the title track, while drummer Willie “Big Eyes” Smith keeps the funk alive and well for the rest of the band to follow along flawlessly.

“Unk” has seen release on CD by Hip-O Select/Geffen Records back in 2006, but other than some sound remastering for digital release there isn’t much to the CD version. Not even decent liner notes to speak of. An album of this importance to Water’s catalog at least deserves proper care and attention when reissuing.

As I’ve said time and time again Muddy Waters was meant to be heard on vinyl. If you want that “I feel like I’m actually in a juke joint and having the best time ever” vinyl is the way to go, especially when the volume is turned up to 11. Should you want to at least prime your palette before taking on the task of locating “Unk” on vinyl, you can preview the album online here. 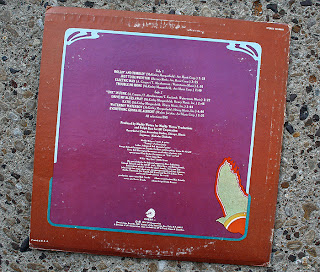 Muddy Waters recordings from the 1970s definitely hold their own against the rest of his enormous catalog of classic hits, including the rarely heard numbers. It should be every music fan’s duty to really dive into and experience the treasure trove of music by such an important figure in American music. And if you like what you hear on “Unk” may I also recommend the “Muddy Waters Woodstock Album” that was released the following year, in 1975. Many of the same musicians can be heard on both albums, including some great musicians you know well and love, like The Band’s Garth Hudson and Levon Helm, Paul Butterfield and Bob Margolin.

Perhaps the public will see “Unk” with a proper reissue, either on CD or perhaps a heavyweight 180g LP. With the growing popularity of vinyl these days it would be a dream come true to see more people with access to Muddy Waters on vinyl. Until that time comes, get it how you can…