Imagine my surprise when after a crappy start to my day changed into one of the most awesome after reading the Hendrix Family is preparing yet another round of fantastic Hendrix releases, some of which I have been eagerly awaiting years for a proper release.

The month of September sees release of not one, but count ’em FOUR new and expanded Jimi Hendrix collections for your ears and eyes to feast upon, for DVD, CD and vinyl lovers.

Hendrix’s Isle of Wight performance from 1970 sees an expanded DVD release featuring special features that allows the viewer to change between multiple camera angles of the performance. Want to see Hendrix’s amazing guitar fret work up close? Now you can. The DVD also features newly unseen footage of his classic “Hey Joe”, the song that launched his career in 1966 London. This definitive expanded edition clocks in at over 180 minutes in length. 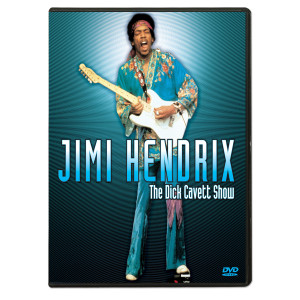 Hendrix’s US network television debut and the special documentary, directed by multiple Grammy Award winner Bob Smeaton [Beatles Anthology, Band Of Gypsys], features complete live performances of “Izabella”, “Machine Gun”, and “Hear My Train A Comin'” as well as new interviews with Cavett, Experience band members Mitch Mitchell and Billy Cox, and others. Hendrix offers a very candid interview with Cavett, discussing his stint as a Paratrooper in the 101st Airborne, his performance of the “Star Spangled Banner” at Woodstock, as well as some intriguing insight to his personal life and sense of humor. This newly expanded edition runs 90 minutes in length, and also features a behind-the-scenes documentary .

On the audio side of things “Hendrix In The West” is a posthumous compilation live album, featuring some of Hendrix’s most celebrated live recordings, that has been out of print in the US since 1974. The album captures Hendrix beginning to explore new music territory with performances from the Berkeley Community Theatre, San Diego Sports Arena, The Royal Albert Hall and Isle of Wight Festival. The expanded  single disc LP will feature five previously unavailable performances, and will included booklet with detailed liner notes and rare and previously unreleased photos.

For the hardcore fans such as myself, the real gem is the “Winterland” collection, live material that has been culled from six performances over three days of shows from October 10-12, 1968 at San Francisco’s famed Winterland Ballroom. This special set, available as a 4CD set, 8xLP set, and single ‘highlights’ CD, features several rare version of Hendrix classics, such as “Manic Depression”, “Are You Experienced”, and personal favorite, “Tax Free”, which have never been previously part of any Sony Legacy Recordings issue. The set also features some incredible never-before-released recordings that were not part of the short-lived single disc Ryko release from the late 1980s. And of that weren’t enough to wet your whistle, the deluxe edition also presents a rare interview with Hendrix recorded backstage at the Boston Garden a few weeks after the Winterland performances. This previously unreleased bonus provides fans with a unique window into Hendrix’s views about his background, his approach to the guitar and songwriting and future direction of his music.

All four Hendrix releases have a street date of Tuesday, September 13th, just days prior to the 41st Anniversary of his untimely death on September 18th. These releases are currently available for pre-order, either through the Authentic Hendrix site, or through Amazon. Order the “Winterland” set through Amazon and receive an exclusive bonus CD of even more rare and unreleased Hendrix gems. Might I suggest the the extra few dollars and spring for the 8xLP version?!?

Once these babies are officially released, you can bet I’ll be back to fill you in on how good they are. Until then, pre-order for yourself!