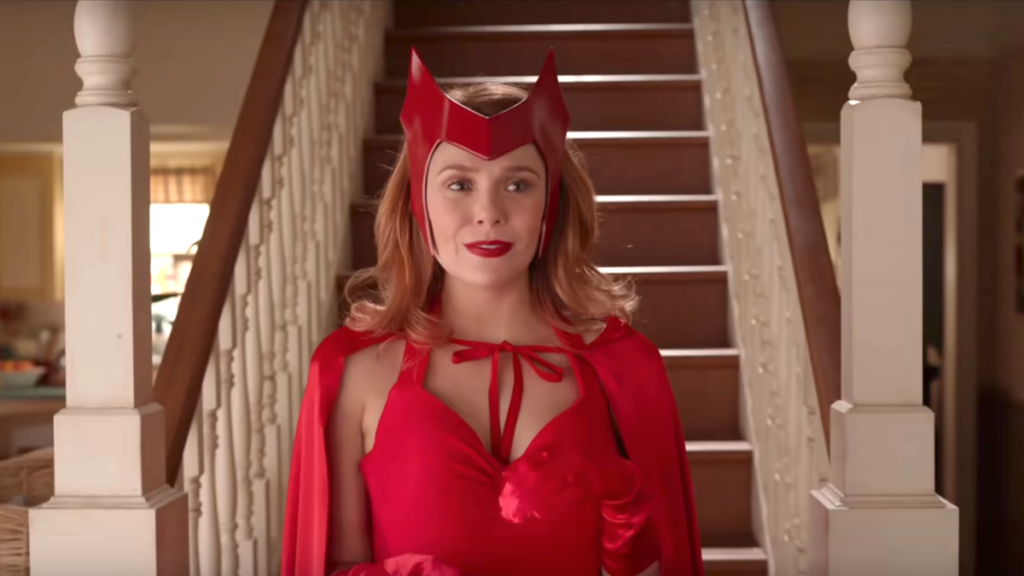 The 6th episode of WandaVision uses the style of Malcolm in the Middle to shift the focus of the show to Wanda and Vision’s twins Billy and Tommy who talk directly to the camera. The end of the last episode left us with quite the cliffhanger of X-Men’s version of Pietro showing up at Wanda’s doorstep and in this 90s sitcom episode, he plays the cool, mooching uncle to Tommy and Billy. It is clear from the start that Pietro’s arrival has caused Wanda to act even more strangely than usual and the twins mention this fact to the camera in one of the moments they break the fourth wall. By the end of the episode, Wanda’s powers and her confusion regarding Pietro expand even further as she tightens her grip on beautiful little Westview, New Jersey.

Since this is a Halloween episode we get to see Wanda in her comic accurate Scarlet Witch costume which she claims is a Sokovian fortune teller. Vision is dressed as your thrift store version of Vision, Pietro and Tommy don matching Quicksilver outfits, while Billy appears to be some kind of ninja? As the family gets excited about the holiday festivities, Vision mentions he can’t join them as he has an important neighborhood watch mission of monitoring the neighborhood for pranksters. Clearly miffed by him not joining the family, Wanda begrudgingly lets Vision go after her brother diffuses the tension by revealing he will help take the kids trick-or-treating. Outside the town in the SWORD headquarters, Monica, Woo, and Darcy are kicked out of this SWORD mission after questioning why they tried to blow Wanda up with a live missile last episode. Monica and Woo disarm the guards escorting them off the premises and Darcy is able to hack into SWORD computers to learn that SWORD is purposely tracking Vision’s vibranium signature inside Westview and can see where every single human is located.

While out trick-or-treating, Wanda learns from a neighbor that Vision wasn’t supposed to be on patrol that night as a way across town Vision encounters a woman in some sort of time loop with a single tear rolling down her cheek. It is a haunting image at the edge of town as Vision discovers that the people not directly in Wanda’s direct “story” are just sort of standing still in the streets or going through very limited motions, trapped in some kind of loop. Wanda and Pietro have a conversation as the twins gather candy in which he reveals he heard her beckoning him from across somewhere saying she needed him to be her. Wanda seems perplexed by this but is interrupted by Tommy who shows off that he has super speed just like his uncle Pietro. Wanda tells the twins to have fun but to not go past Ellis Avenue.

Vision sees more and more people in loops and sheds his costume to fly above the town and observe. In the distance he sees a car stuck at a red light and realizes that it’s Agnes. He wakes Agnes from her trance and she says “You’re Vision! You’re an Avenger. Are you here to save us?” Vision reveals he doesn’t know what an Avenger is and Agnes asks if she is dead. When Vision asks why she would think that her reply is because you are. Then Agnes begins to cackle saying Wanda will never let them leave forcing Vision to put her back in her trance. As Agnes drives away, Vision walks towards a field across from Ellis Avenue.

Monica gets a call from someone and tells Woo they have to meet the person who can get her back in the Hex. Darcy cautions Monica stating that her medical report on the SWORD system shows her DNA has changed. Monica states she has to help Wanda but a part of me feels like she knew her DNA was changed before all of this based on some breadcrumbs over the last few weeks. Darcy opts to stay in SWORD headquarters to secretly continue hacking while Woo and Monica leave the base to meet whoever called her. 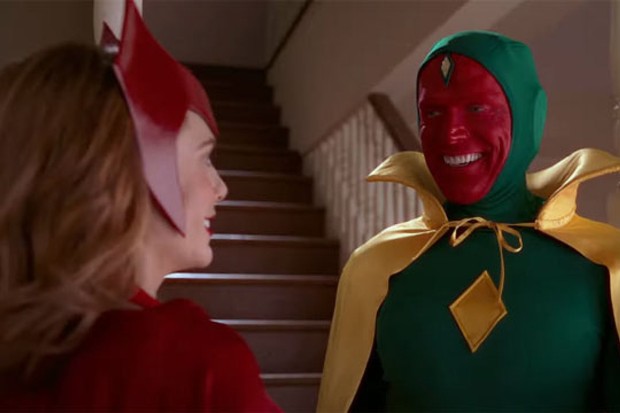 Back in the Hex, Wanda and Pietro have a heart to heart. Pietro asks Wanda how she is doing this and tells her that he is impressed. He mentions that she must have kept all the kids asleep until she needed them for the Halloween episode and praises her choice to keep families together. Wanda seems put off by this but doesn’t dispute it. When pressed on how she is doing all of this, Wanda says she has no idea how she did this and that she only remembers feeling empty and nothingness. As she turns to her brother she sees him dead and covered in bullet holes from the end of Age of Ultron.

Darcy and Sword see that Vision is pulling himself through the forcefield of the Hex. As he makes it to the other side he starts to be torn apart as pieces of him fly back into the Hex. He screams in pain and yells, “The people need help!” Darcy blows her cover and asks SWORD to help him before she is restrained. Vision collapses in pieces seemingly dead. Inside the town, Billy hears his Dad screaming in pain and can see what is happening. He rushes to Wanda to tell her what is happening to Vision. Pietro jokes about her dead husband can’t die again and she blasts him into a pile of hay before telling Billy to focus his powers and find Vision. When Wanda learns that Vision is near the SWORD soldiers outside the Hex she freezes everyone (except her kids) in the town and her eyes go red. The Hex begins to expand and engulfs the entire SWORD base turning them into circus clowns. It appears that Woo and Monica escape as does the director of SWORD but Darcy is now part of the circus.

This episode makes it clear that Wanda may not understand how she has the power to do these things but she can easily influence and control more than one town in New Jersey. It appears that she expands her forcefield at least another half-mile in every direction putting countless more innocent people under her spell. It is very exciting to see how they pivot moving forward now that Vision knows the truth of his circumstances and can’t seemingly be controlled by Wanda. At this point, it appears the villain and hero of the story may be Wanda herself.