I Care A Lot – Film Review 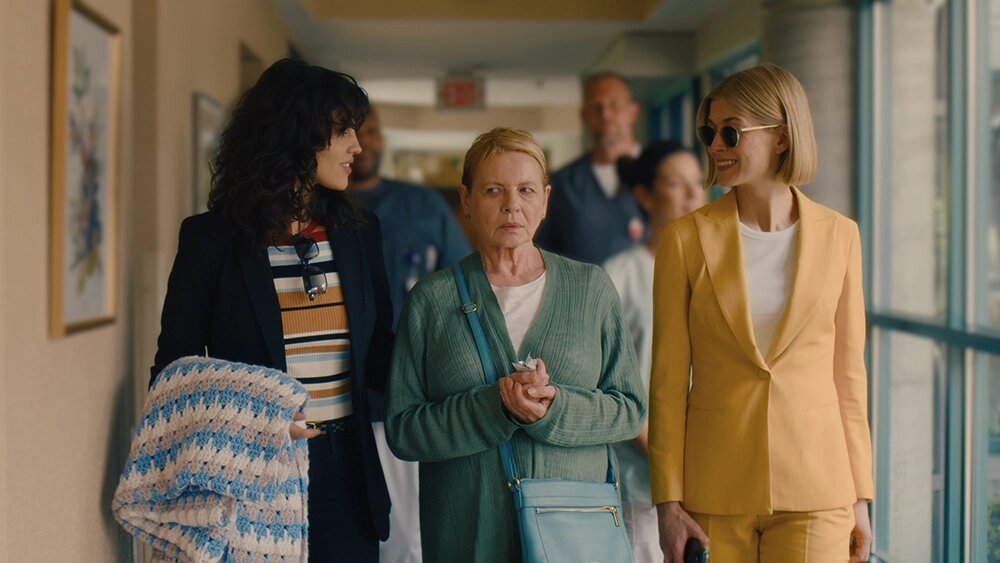 ” I Care A Lot delivers the most sinister villain to cinema.”

Bursting onto the scene with one of the most venomous villains in cinema history is the character Marla Grayson in J Blakeson’s (The 5th Wave) new film I Care A Lot that centers around the world’s biggest scumbag lawyer as she convinces judges to appoint her legal guardianship over elderly people, under a con she creates that these people cannot take care of themselves, which leads her to bleed them dry of all their money. However, a new client might be more than she can handle in this extremely bleak, mean, and crude film that gives a satirical look at this all-too-real scenario that is plaguing families right now. This is not a happy movie, nor is it made to incite good feelings nor smiles, but instead, it conjures up anger and downright loathing for its central character in Marla Grayson, played perfectly by Rosamund Pike. I Care A Lot delivers the most sinister villain to cinema while trying to add some dark comedy to the mix.

I Care A Lot follows the life of Marla Grayson (Pike) as she successfully cons idiotic judges into giving her sole guardianship over elderly people so that she can force them into nursing homes and steal all their money for her own personal well-being. She has a string of criminals, posing as legal workers helping her out, being doctors, nurses, and owners of nursing homes that follow her lead and do as she says in lieu of a piece of the cash pie. It’s as if she’s the mafia boss of a group of gangsters, but are disguised as legal, upright citizens in the community. Marla is as despicable as they come, only imitating to be pleasant around every corner. That is until one of the doctors under her rule gives her a lead on an older woman named Jennifer Peterson (Dianne Wiest), who has money, no family, and a ton of assets. 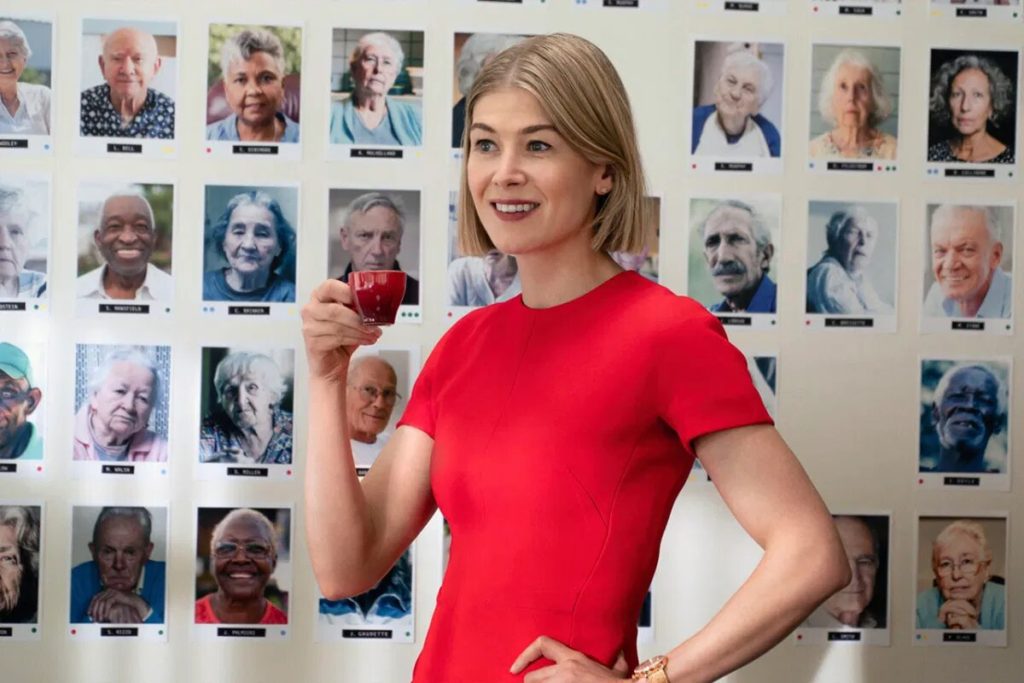 The doctor and Marla produce a faux report saying that Jennifer cannot care for herself anymore and being that she has no family, must be forced into the care under Marla and sent to a nursing home where Marla will be in charge of her life and finances with her Jennifer’s say so on anything. But it turns out, Jennifer has some extremely powerful connections into the very real and violent Russian Mafia, led by Roman Lunyov (Peter Dinklage) who will stop at nothing to get Jennifer out of this mess. From here, the back and forth between Marla and numerous henchmen, a brilliant consigliere (Chris Messina), and more diabolical dealings from Marla come to the forefront that all culminates into some action beats, gunfire, and a twist that makes this Marla character even nastier.

I Care A Lot feels a bit uneven as it tries to navigate a few different genres. In one scene, there could be a suspenseful and emotional conversation, where the next could be verging on silly dark comedy territory that is followed by a random shootout between mafia men inside a nursing home. A lot of it doesn’t make sense in those particular elements, but with the addition of Dinklage as the health-nut mafia boss, it all works well. He plays it seriously most of the time and he is ruthless for sure, but there is something funny underneath this platform of criminals who are in it solely to make money by destroying and killing innocent people. 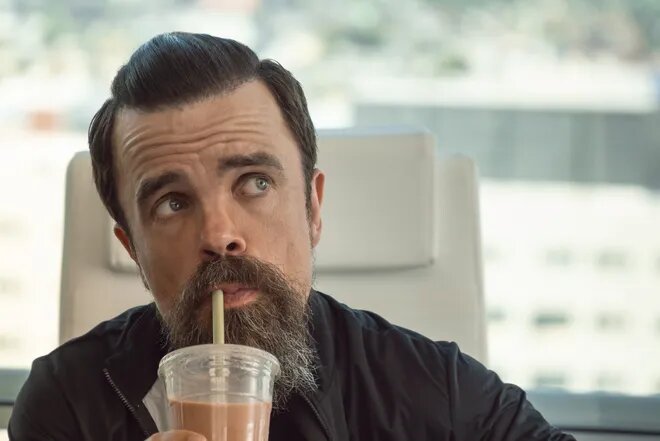 Grayson tries to make Marla a sympathetic character, but it never works. Even with her flash of a childhood displayed and her love interest with Fran (Eiza Gonzalez), who is her partner in crime in everything – nothing about this woman relates to anything genuine or good, where there is really nobody in the entire film to root for other than the actual mafia or a cameo appearance by the fantastic actor Macon Blair (Blue Ruin) who bookends the movie. Pike is extremely wonderful in this role and channels some of her evil from Gone Girl here, as she is no stranger to playing a vicious antagonist. Again, there is not much to like in any character in this film, which makes it somewhat difficult to watch with nobody really to root for, but it’s a wild and satirical look into elderly abuse and the legal system in this country that rewards criminal activity.

WATCH I CARE A LOT ON NETFLIX 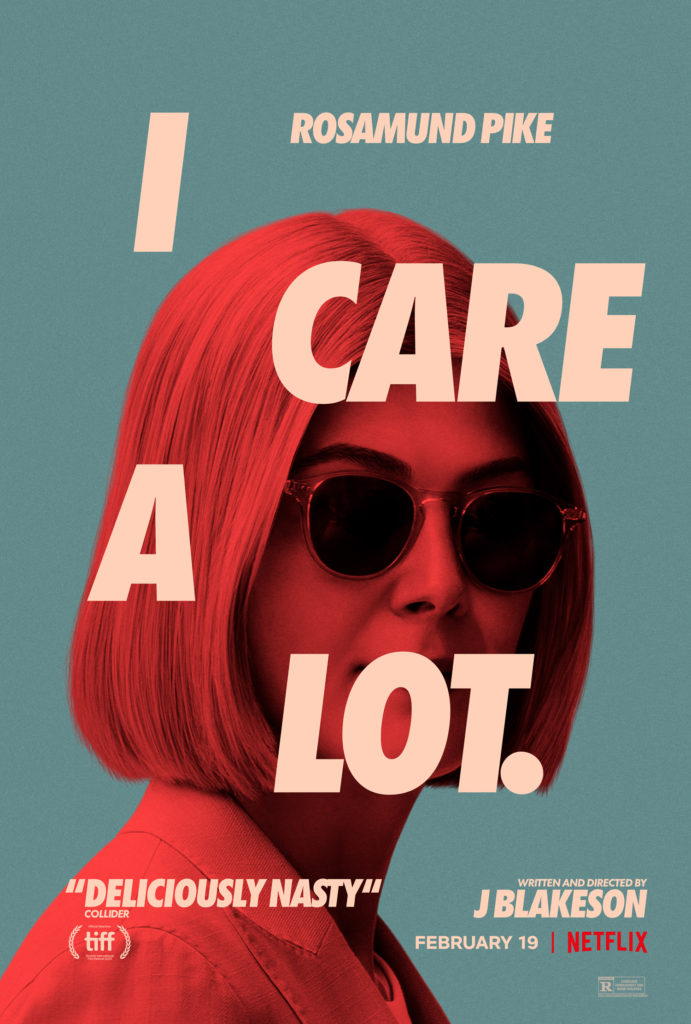