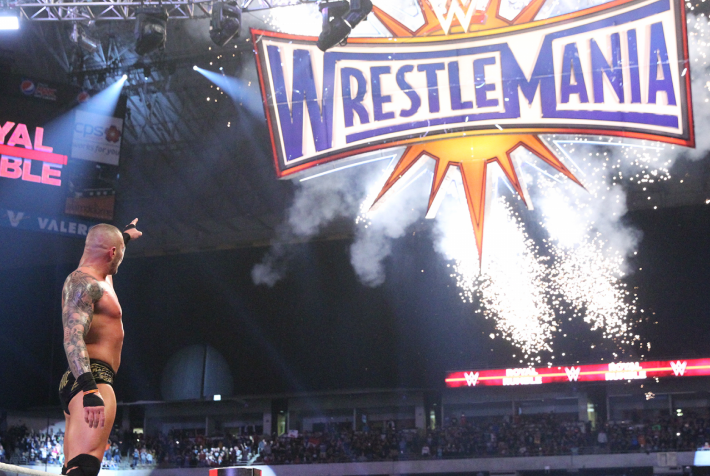 The road to Wrestlemania is officially underway as the 2017 Royal Rumble has a winner. Perhaps the second biggest WWE event of the year, the winner of the Rumble goes on to the main event of Wrestlemania to challenge the Champion on the grandest stage of them all. This 29th Royal Rumble took place in San Antonio, Texas at the Alamodome and had over 50,000 people in attendance. Before the Rumble match itself, there were several championship matches with interesting outcomes, which should tell the tale of what’s to come at Wrestlemania 33 in April. Now here’s a taste of the good, the bad, and the ugly of the Royal Rumble 2017. 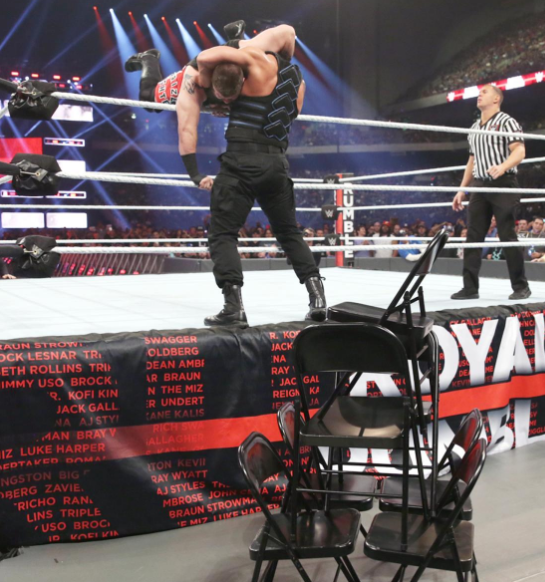 Roman Reigns is one of the most hated superstars in the WWE business right now. Let me re-phrase that. Roman Reigns’ creative decisions by the top people in charge are the most hated thing in the WWE business right now. You have the muscle from the amazing tag team The Shield with his long wet hair, trying to dominate the business. Reigns is a great wrestler hands down. He’s just been force fed to us for so long as a face in the worst way that nobody seems to like him anymore, minus kids under 8 and emotionally stunted women.

Reigns runs nowhere, but instead walks slowly to the ring and has the worst finishing moves in the business. If Reigns changed these things along with new music and getting rid of his body armor, things would look up.  Also, it wouldn’t kill the creative team to make him have a sense of humor and not be so monotone. Anyway, back to the lecture hand – Kevin Owens is a big guy with a gut, but can fly high and do every possibly wrestling move with the best of them. He’s a certified badass in the ring and on the mic, but his gimmick is the cowardly bad guy who cheats to win. This match at Royal Rumble was a “no disqualification’ match, meaning all weapons and interference were legal. Add to that, Owens’ best friend Chris Jericho was suspended in a steel shark cage some twenty feet above the ring, because why not. 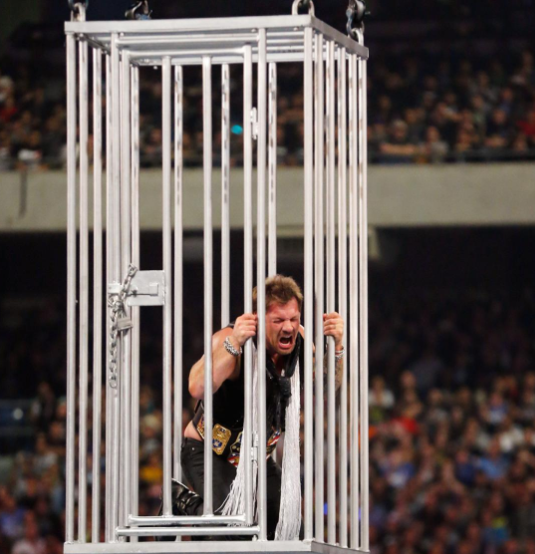 The match itself was damn fun and probably the best of the night. There were pyramids of chairs, tables, and brass knuckles. It was fast paced and it seemed like the crowd was into it, even Reigns at the time. The big 400 pound 6’8 guy Braun Strowman appeared and screwed Reigns over, therefore Kevin Owens won his match and still has the title. You can see here that the creative team is trying to make Roman Reigns look like the good guy here, but they need to accept the fact that Reigns would rule as a heel. It might be too late for him though as the crowd is so vehemently against him right now, or shall I say Vince McMahon and the creative team for booking him this way for the past couple of years. 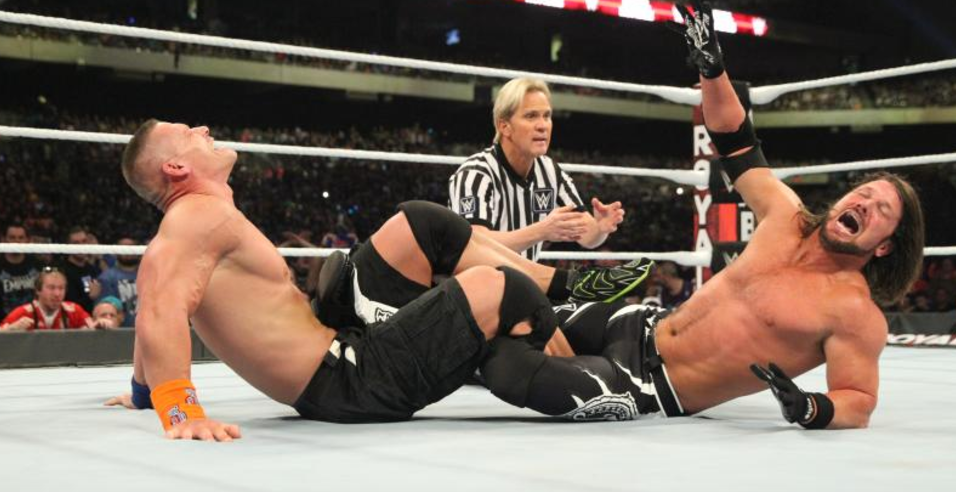 Everyone knows John Cena by now. You’ve seen him have sex on screen, kill the bad guys, and act goofy, all while being a role model for kids in Never Giving Up. Cena has been the WWE Championship a total of 15 times over his career. If he won it a 16th time, he would tie that success with only one person – Woooooo The Nature Boy Ric Flair. Cena suffers from the same ailment as Roman Reigns, as most fans have stopped cheering him, because again, he’s older, not in his prime anymore, and has had the same gimmick and moves for way too long. On the other hand, AJ Styles is a veteran wrestler and has only been in the WWE for a year.

In that year, he has basically carried that company on his shoulders as one of the best in ring performers and skilled mic talkers. We’ve seen this match a few times before this past year, but it all culminated in a John Cena win. Both men were kicking out of their finishers, which brought the crowds to their feet each time. These two amazing superstars sure put on one hell of show and Cena pulled out some different moves for this match to prove he still has it. And what hasn’t happened since the Bush administration, people started cheering loudly for Cena when he won, because he deserves it. It was nice to see for sure. 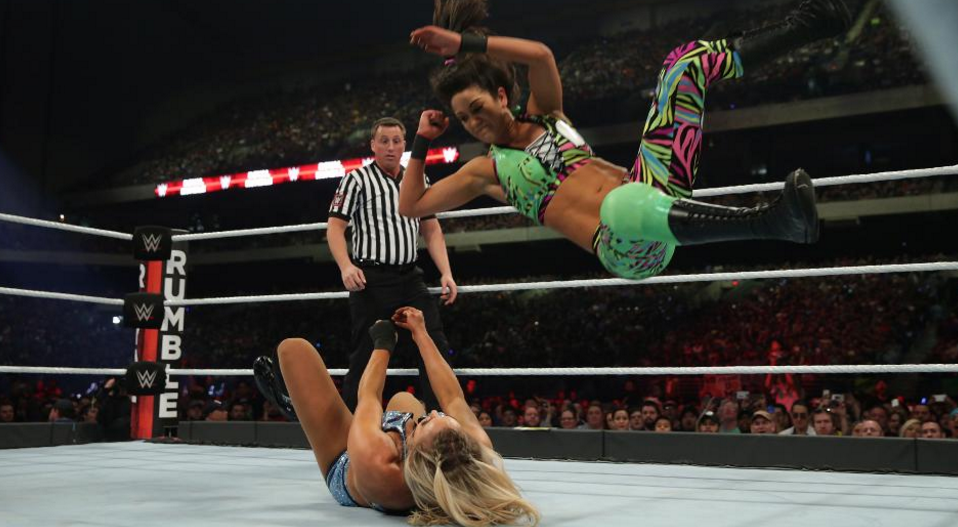 There were three women’s matches, all of which were a let down. This is unfortunate, because there is so much talent, but it’s all being booked wrong. Two of the three women’s matches were only on the pre-Show, and not even the main show of the night. Charlotte Flair, who is the daughter of Wooooo Ric Flair is probably the best wrestler in the business (male or female). She is also amazing as a giant heel and milks it very well. Her opponent was Bayley, who is the nice relatively newcomer, huggable wrestler who is fairly small. Bayley’s move set isn’t all that impressive either when compared to Charlotte, making this a one-sided fight for its 13 minute run time.

It just got redundant and uninteresting. Needless to say, Charlotte won and is now 16-0 on wins at PPVs. The same thing can be said for the Nia Jax vs Sasha Banks match. Nia Jax is The Rock’s cousin and is 6’0 tall and 250 pounds. Sasha Banks is 5’5 and 110 pounds. It makes no sense. This match was 5 minutes and was basically Sasha getting murdered for most of it. Jax won and it was never to be spoken or thought of again. There was also a six-woman tag match with the ladies of Smackdown Live. It was fun for sure and I’m glad to see Naomi getting the win, but it was forgettable. 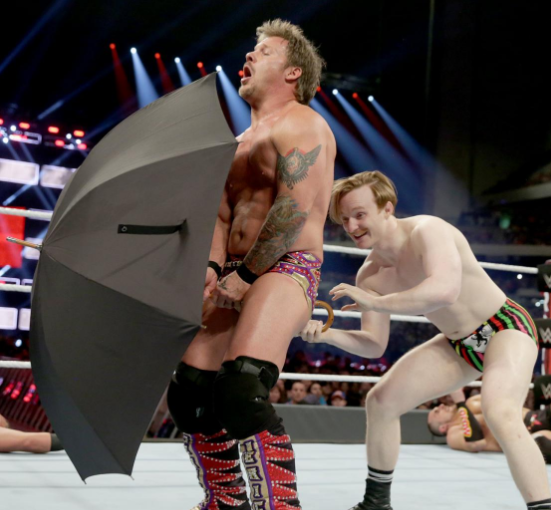 30 superstars are in the Rumble trying to win. Each superstar comes out two minutes at a time. Throwing your opponent over the top rope and have their feet touch the ground is the only way to eliminate and potentially become the winner and go on to Wrestlemania. There were 22 superstars announced in this year’s Rumble match, leaving 8 mysterious surprises to have the WWE fans go apeshit crazy for. In the past, they have debuted new wrestlers from other promotions and even brought back older wrestlers from the attitude era. It’s always fun to see who comes out next as the clock counts down for each superstar’s entrance. Big Cass was #1, which told me that he would last quite a while, but that wasn’t the case.

In fact, Big Cass lasted under 10 minutes. Also, there were no big surprises this year, which was so upsetting and unfortunate. The only real surprise was entrant #10, which was the amazing Tye Dillinger from NXT. He got a huge pop, but only lasted 5 minutes, which was an unfortunate debut on the main roster. That being said, Tye Dillinger forever! Perhaps the most fun entrant was Jack Gallagher, who is known to be a true gentleman in the ring. He came out with an umbrella who hit Chris Jericho in the nuts with it. He then opened the umbrella between Jericho’s legs and twirled it, thus making Gallagher into a full fledged Mary Poppins (as my colleague Mike Purtill says). It was hilarious in all the right ways. Chris Jericho was the true MVP of the Rumble, staying in the ring for over an hour.

No, he wasn’t wrestling that whole time. Jericho is smarter than that. He played injured on the outside and counted the minuted until it was time to dominate. It was excellent. Others came out, but then the surprise entrants came out, only to last a minute or two, including Mark Henry (he’s from Texas, I get it), Enzo (horrible waste of time, only to get eliminated in 18 seconds), James Ellsworth ( who lasted 15 seconds, but had a funny bit with his former friend Dean Ambrose). The last few people were Undertaker, Brock Lesnar, and Goldberg. Undertaker eliminated 4 people, while Lesnar and Goldberg eliminated 3 people each. Lesnar was dominating until Goldberg came out, where Lesnar turned into Ellsworth and easily beaten up by Goldberg and tossed out of the ring.

There was one more entrant to come out, which everyone was super excited about. Who could it be. It was a mystery. Enter Roman Reigns as entrant #30. The crowd basically went silent and was met with loud boo’s. Really? That’s all they could come up with? Was this a treat for Reigns, because he entered at #1 last year? It was terrible. Roman came out after his big match with Kevin Owens and eliminated three people, including Chris Jericho, Bray Wyatt, and Undertaker. There was no Kurt Angle. No Samoa Joe. No Triple H. And no Seth Rollins in the Rumble. All of which were rumored to show up. It was a big let down, minus a couple of comedic spots. Randy Orton and Roman Reigns were left, where Orton quickly threw Reigns over, winning the match. This is the 2nd time Orton has won the Rumble, last time being in 2009. I love Orton, but it was very unexpected. 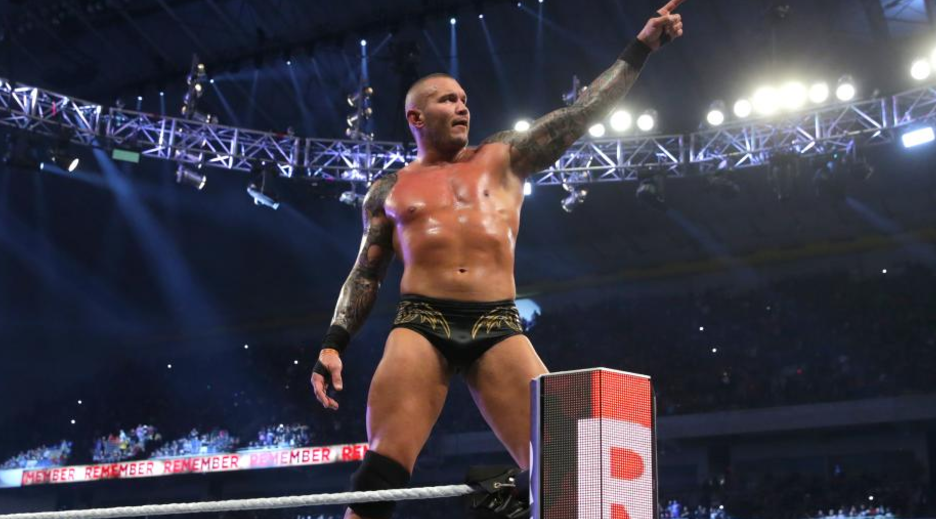 Where is WWE going with all of this? Yes there are a couple of PPVs in between now and Wrestlemania where championships could and should change hands. Here’s where I think it should go for Wrestlemania. As of right now, the main event at Wrestlemania will be John Cena vs Randy Orton, which we’ve seen many times before, and if it isn’t a no disqualification match, it will be a super boring main event, just like last year between Reigns and HHH. They should avoid this at all costs. Instead, Cena has his 16 time Championship now, but have him lose to Bray Wyatt at Elimination Chamber, putting the Championship on Wyatt. This would have either Orton or Wyatt turn on each other and have a badass main event at Wrestlemania. We don’t need Cena vs Orton again. If this is the case, which I hope it is, leaves Cena open for Undertaker, which has never happened at Wrestlemania before. Sure, they could book Undertaker and Roman Reigns in retaliation for Reigns eliminating Undertaker at the Rumble, but that would be dumb for many reasons.

Instead, have Reigns take on Braun Strowman, who interfered in his match at the Rumble after Strowman is done killing Baron Corbin. That way, you have the big bad Strowman get beat by Reigns, who the crowd might start to cheer. It’s a big “if”, but Reigns again needs to change his move set. So right now, we should have Cena vs Undertaker, Reigns vs Strowman, and Wyatt vs Orton at Wrestlemania.

Now you have Brock Lesnar vs Goldberg. I don’t care about this. The match will last less than three minutes, and really – who cares. Goldberg is dog-shit. Lesnar is God. Nuff’ said.

They are also building up to a Seth Rollins vs Triple H feud, which I hope takes its time, but so far, we just see Seth Rollins acting like a spoiled 5 year old kid. It’s not any fun yet.

Now we have Kevin Owens as the retaining champion, and it’s always a matter of time before Chris Jericho turns heel or Owens turns on Jericho, leaving these two to fight at Wrestlemania, which would be epic. That’s six matches at Wrestlemania for you that should happen. I

‘d like to see AJ Styles and Samoa Joe have a match as well, perhaps for the intercontinental championship, which would blow my mind.

I also want to see a triple threat Women’s match at Wrestlemania between Charlotte Flair, Nia Jax, and Asuka with Asuka winning. Now that’s not to say this will happen at all, but this is the way everything should be booked, because it makes the most sense and would be the most fun.