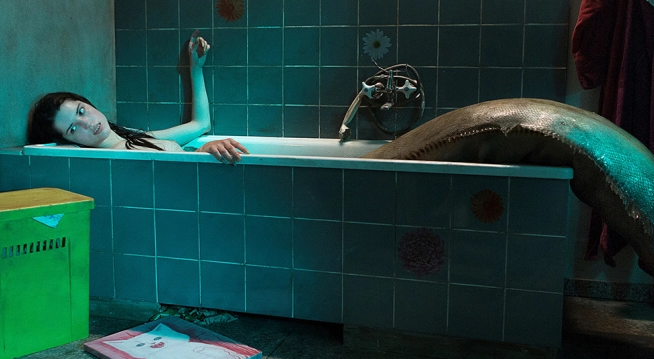 In a mermaid tale more aligned with Hans Christian Anderson’s Little Mermaid than the less bleak Disney version, The Lure combines fairytale, horror, new wave/disco musical, and love story into a frenzied 90 minutes that still pulls off some poignant, quiet moments. Filmed in Poland, it is short film director Agnieszka Smoczynska’s first feature length project, and it is a promising effort.

A small Warsaw band parties by a lake one night, when sister mermaids Srebrna (Marta Mazurek) and Zlota (Michalina Olszanska) rise from the waters, singing their enchanting song, and ask Krysia (Kinga Preis), Perkusista (Andrzej Konopka), and Mietek (Jakub Gierszal) to help them onto land. It is a moment that is enchanting but filled with anxiety – it is obvious that the mermaids may not be safe companions.

Fast forward to Krysia belting out Donna Summer at the adult nightclub where she and the band have a regular gig, as the club owner, Kierownik (Zygmunt Malanowicz), literally smells something fishy and searches the club to find Srebrna and Zlota hanging out in the dressing room having traded their legs for tails. Though in our lives this seems far-fetched, Polish people must have an expansive capacity to accept the extraordinary. Perkusista throws water on the sisters, shows Kierownik that they are really mermaids, everyone cavalierly acknowledges what they are, and now the lives of these four humans and two mermaids become fatefully intertwined.

Srebrna and Zlota make the most of their vacation from the water, expecting that it will be a good time until they head to a new destination. But the more time they spend on land, the more they are seduced by what is offered in the human world. Kierownik, Krysia and Perkusista encourage the mermaids to become part of the act, leading to some very ABBA-esque musical performances. Srebrna and Mietek begin to fall in love, but as a mermaid, Srebrna must be sure that Mietek loves her back completely or she will face dire consequences.  Zlota, beginning to feel the fear of losing her sister to the human world, distances herself from the band and indulges an appetite for human hearts and longs to become a singer in her own right.  Along the way the meet Triton (Marcin Kowalczyk), a former mermaid turned human punk rocker, who warns the sisters of the consequences of living on dry land.

This is very much a coming of age story about how two sisters, who have been inseparable, can be pulled apart by different ambitions. It is also a cautionary tale about the things we become obsessed with, as each character faces an infatuation or addiction that interferes with their lives and relationships. And while these themes play out, they are wrapped into disco and new wave musical numbers that keep the overall feel poppy and fantastically surreal.

The overall mood for the film also works well. While there are parts of the movie dazzled up with sequins and theatrics, it maintains a grimy edge throughout so you stay in touch with the fact that as fun as this is, it may not end well. It also lends itself to some of the horror of the movie, but it never truly scary – just menacing. The movie does encounter a continuity problem towards the penultimate scenes. A musical number seems mashed into the storyline, and leaves you wondering if part of the story was cut or if it is part of the director’s push to keep you on edge and dazed about how Srebrna and Zlota affect the lives of the humans.

In the end, there are consequences for both the mermaids and the humans. It’s obvious that a price will be paid at some point for relationships that should never cross the shore, but everyone is so caught up in the fun and outlandishness that it is too late to stop the inevitable. I highly recommend The Lure. It is a film that you can walk out of the theater knowing you’ve never seen anything quite like it. And beyond that, for those who know the real Little Mermaid fairytale as Hans Christian Anderson intended, it is satisfying to see Smoczynska be more faithful to story he intended.