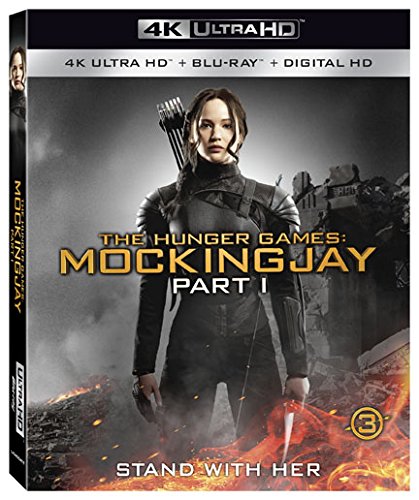 Things are not looking up for Katniss Everdeen (Jennifer Lawrence) in this third installment of Suzanne Collins‘ young adult book series ‘The Hunger Games‘. In an effort to squeeze as much money as they can, the movie studio decided to split the third and final book into two parts, much like the last two ‘Harry Potter‘ films and the recent trilogy of the single book of ‘The Hobbit‘. On one hand, the fans will get two movies. On the other hand, there will be a lot of filler between these two films to stretch them out to their two-hour run time.

Rest assured, ‘Mockingjay Part 1‘ is a dark movie. War has begun between the Capital, led by President Snow (Donald Sutherland) and the new resistance, led by President Alma Coin (Julianne Moore). Since the studio executives decided to split this third story into two films, this first part serves as a promo for all the action and excitement for the next film, which is unfortunate, because the last two films were quite good. ‘Mockingjay Part 1‘ is basically just a bunch of filler and setup for something bigger and greater. The pacing is much slower than the last two films and might have you yawning or checking your watch a few times throughout.

That being said, it’s still a decent enough movie with good performances, excellent visual effects, and good camera work. And it’s a must-see if you want to stay in the story line of this book series, but as a stand alone film, it doesn’t amount to much at all. It’s just a bummer, we all have to sit through this first part to get to the meat and potatoes of Part 2. I’m going to assume that you all have seen the first two films, but if not, I suggest you watch those and read our review HERE, before you proceed. ‘Mockingjay Part 1‘ starts off right where ‘Catching Fire‘ left off, with Katniss rescued from the last game, while Peeta (Josh Hutcherson) was kidnapped and taken to the Capital.

Katniss was rescued by the resistance with President Coin and Plutarch Heavensbee (Philip Seymour Hoffman) running the show. Their goal is to take down the evil Capital, by uniting all the people who are now basically slaves to the Capital and evil President Snow to rebel and regain their freedom. Their strategy is to use Katniss as a symbol of the Mockingjay to make a series of commercials to amp up the spirit of the people to rebel. So Katniss travels from section to section, where the Capital is bombed and killed thousands of people for treason. Katniss sees this destruction and either sings or cries into a speech. Her camera crew films, and the people back at the resistance broadcast it all over the world. This leads to a bunch of people standing up to the Capital.

Meanwhile, Peeta is sending video messages out to the people, telling the resistance and Katniss to stop this war and lay down their guns, but Peeta seems to be getting physically and mentally worse with each video. So what did we find out in ‘Part 1‘? That a big war is coming to a head and that Peeta and Katniss have some issues to work out. That’s about it. While this is definitely the most sinister and darker of the ‘Hunger Games‘ films so far, it is by far the slowest. At least the visual effects are all top notch and the one big action scene was quite good, but it was over before you could blink.

I’m sure this film will go well with ‘Part 2‘, but as of now, it’s just a sedated piece of filler that will prep us for the next big film. And if the filmmakers chose to end this installment five minutes earlier, with a big cliff hanger, instead of a fizzled out ending, the movie would have left a better taste in my mouth.

Lionsgate enters the third game with the 4K UHD release of ‘The Hunger Games: Mockingjay Part 1‘, which has a HEVC H.265 encode in HDR10 with a 2.40:1 aspect ratio. This release has a digital download code as well as the standard Blu-ray version, in addition to the 4K disc. There is no 3D option here.  There is definitely an improvement here in detail and color, since both Mockingjay films were shot digitally rather than on film. Detail is still very vivid and sharp in closeups in well lit exteriors. The individual hair strands on Katniss’ hair look incredible in this new 4K upgrade as well as walking through the abandoned city, with all its imperfections. The hardcore color grading really does a number on the overall detail of the picture. The HDR looks amazing here though and is the biggest and most noticeable upgrade with this 4K release. The colors are somewhat saturated in certain scenes to give a pale look to everything as if everything is decaying. Other moments are bright and bold throughout with different variations on certain colors on costumes in different lighting conditions. It all looks excellent. Detail also provides strong closeups with wrinkles, makeup effects, beads of sweat, and individual hairs, which show up nicely. Black levels are very deep and inky as well. There are no other compression issues of any sort here, leaving this with a great looking 4K presentation.

This UHD release of ‘The Hunger Games: Mockingjay Part 1‘ has an English: Dolby Atmos track, where I used a 7.1.2 Atmos speaker setup with the normal 7.1 surround and two overhead speakers, plus a subwoofer powering this comedy action soundscape. The standard Blu-ray version has a Dolby Atmos track as well. This is an excellent audio presentation and is demo worthy for this type of film. The fully immersive track is outstanding in the heavier action scenes where the children are fighting in the woods. There is full immersion with the ambient noises here as Katniss and her followers make their way to the capital with different traps being set off and tons of gunfire. The weapons being fired sound excellent too with some great directionality. Dialogue is always crystal clear and easy to follow along with and free of any pops, cracks, hiss, and high shrills.The score is always sweeping and adds to the suspense in each scene. The low end packs a great amount of bass without going into rocky territory. The overhead speakers provide some great moments as well in the heavier action scenes. This is a top notch audio presentation. 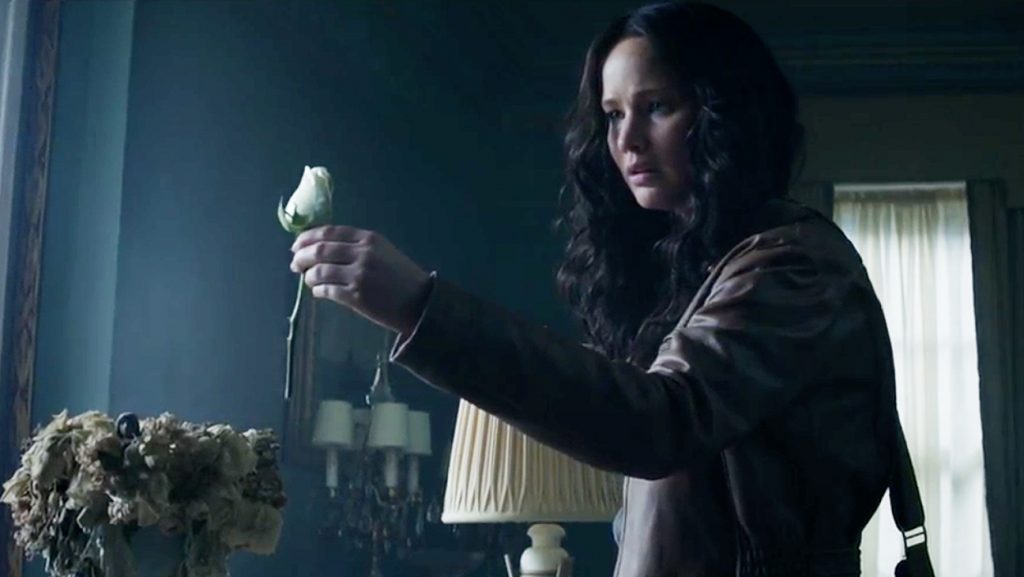 Audio Commentary– Director Francis Lawrence and Producer Nina Jacobson turn up the entertainment and chat this time around and talk through most of the film. They cover some of the behind the scenes aspects, technical details,  character arcs, and working with the author.

The Mockingjay Lives: The Making of “The Hunger Games: Mockingjay Part 1′ (HD, 135 Mins.) – This is an over two hour long bonus feature that covers all aspects of production in seven segments. From pre-production to post-production and everything in between, this extra covers it and is well worth the watch.

Straight From The Heart: A Tribute to Philip Seymour Hoffman (HD, 11 Mins.) – This is a nice trubite to the late actor. He will sure be missed.

Songs of Rebellion: Lorde on Creating the Soundtrack (HD, 8 Mins.) – This takes a look at the music of the film in detail.

Deleted Scenes (HD, 12 Mins.) – There are some excellent deleted scenes here that involve some unfinished effects, but these scenes are all interesting to watch, as  they add a lot of development to the final product that we didn’t see.

Lorde’s ‘Yellow Flicker Beat’ Music Video (HD, 4 Mins.) – The song by Lorde has a music video. Here it is. 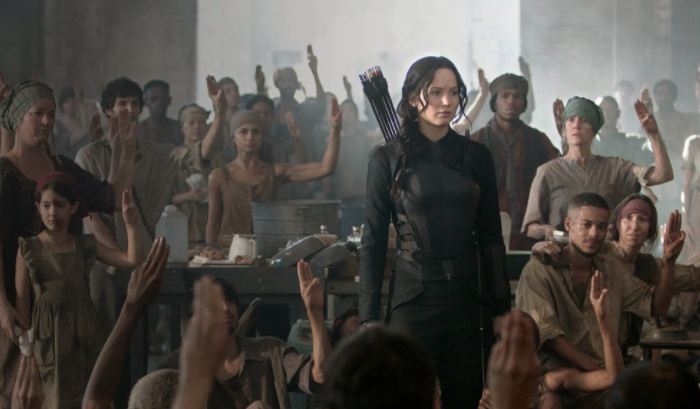 ‘The Hunger Games: Mockingjay Part 1‘ is finally out in 4K UHD and it looks and sounds great. The film itself is one big set up for Part 2 and has flashes of moments of greatness, but is overall slow, bland, and uninteresting. I wish I really would have liked this more. All of the extras from the previous standard Blu-ray release are imported over here, and are on the 4K Disc, which is AWESOME. Even though I didn’t enjoy the film too much, I know others did, and this release comes HIGHLY RECOMMENDED!