Good Day everybody, and so here begins my foray into writing for local music events.  I have been endeavoring to insert myself into the local music crowd in the Dallas/Fort Worth area for what feels like ages.  I’m not sure how it’s going, but it doesn’t really matter.  I have my own aspirations, but when I got to local music events it’s because I truly appreciate the music scene and those that are fighting every day to keep it alive… on the plus side… I get to see bands that I have just been dying to see for what also feels like a very long time.  This past Saturday, April 16 of the year 2016, I finally got to see Powerman 5000 and a few other local bands that are really kicking ass right now; but I’ll get to that in a minute.

I am going to get a little personal for a second… I don’t get out much, and when I do, I am either bartering or have calculated the risk of the cost of the excursion and have deemed it worthy of risking the expense.  You never know though, you can hope for a good show… you can love a band for ever (albeit only recently “liking” them after seeing them because one loves everything but can’t remember everything) and be disappointed when you finally see them in person.  I like local venues because it feels more personal, you have a better chance at meeting and speaking with musicians and artists, and the cost is way lower than super shows…. which i do have to admit, I occasionally wish I had the money to blow on.  SO, back story, kind of there, I value my dollars…and I appreciate a good show… and because I’m a fellow musician (violin, vocalist, mandolin…some other stuff), I’m a bit picky.

The whole point of going out on the 16th was to celebrate a friend’s birthday.  I hitched a ride with my sister to her apartment and started watching a horror movie with my friend before we caught the bus and then caught a train and then caught her friend fortuitously while walking towards a local establishment.  As we were getting into the car, an elderly gentleman in a wheel chair who appeared a bit weatherworn started to speak… I’m a bit hard of hearing (for a few reasons) so I go off vibrations and all I could feel was need, so I handed him five bucks of the money I had to spend that night and wished him *Luck* and off we went.  Turns out we needed to meet up with one of the opening band’s representatives (or members?) of to get a great deal on some tickets to the show.  Our mutual friend and myself get out and I meet a few of her friends and then the contacts show up.  This guy, pipes up while they go off to get more tickets that he’ll pay for all of us to go… talk about AWESOME!!  Happy Birthday to my friend, Merry UnBirthday to Everyone.

Some time passes as we depart to prepare ourselves for the event, and we do need nourishment so we stop at Fuzzy’s for some food and it was pretty good… though, their quesadillas are kinda too much for me.  Anyway, we get into Trees but it’s Rivethead that’s on and to my dismay I realize we missed Three Eighty Three, though, I would have to say their support was heavily represented in t-shirt form amongst the crowd (I wonder if they are any good, they’re nice though).  Rivethead, I have seen before, and I really enjoy them.  The first thing I noticed is that they’ve added a female musician to the band which is pretty freakin’ cool I think.  There are lots of talented ladies out there in need of some serious collaborations and she’s good.  We got the last three songs but I didn’t get into it until the closing number.  It’s a rousing Fast paced thoroughly heavyily sweet rendition of “SexyBack”.  The lead singer just happened to mention that one of the members of Powerman 5000 mentioned they should keep it in their repertoire.  I wholeheartedly agree… That is where the evening really begins for me.

Break-time on the patio in the smoking section, i really get a gander at the t-shirts but they disperse kind of quickly and then the crowd of dedicated fans of the following bands begins to appear.  The next band is BitRot, and I am still kind of on the fence about the way I feel about them or him… or whatever.  I have seen them perform a few times, and kind of happen to have a mutual friend who was chatting while I was standing around and I felt the urge to interject a thought about a feeling that I felt he absolutely had to know and this guy (the lead singer of this band, also have seen him playing with Designed in Kaos) kinda was, well, rude.  I blew it off and told the guy what he needed to hear, and since then… whenever I see him or them I kind of feel a sense of distaste, which isn’t really helped by what I perceive as a generally misogynistic overtone in the music.

I did confer with one or two people who say that’s just a schtick, so I made the general decision to accept it as such.  Every artist knows that we really do have a part of ourselves in every thing we are expressing, so… I choose to just kind of accept it for what it is… Also, it doesn’t hurt that the song that they have that is about suicide and references an acquaintance he knew that was lost is a subject that I can personally relate to and is also really fucking good.  That song, in particular, is what has sold me on acceptance of whoever they may be with objectivity.

I’m really grateful for this distance because the ability to separate personal feelings and prejudgments allowed me to really really get into the music.  It’s weighted with the deep energy that really grabs into something primal inside me.  I have hurt I have been hurt I have wanted to hurt and I have to say that the whole set that night was gripping, it allowed me to enjoy some tasty beats some really riled up hostility and just kind of ride it for a while and then let it go.  I love shows like that.  You get to really experience something when energy is honest, and like it or not… it’s really fucking honest and I appreciate that. 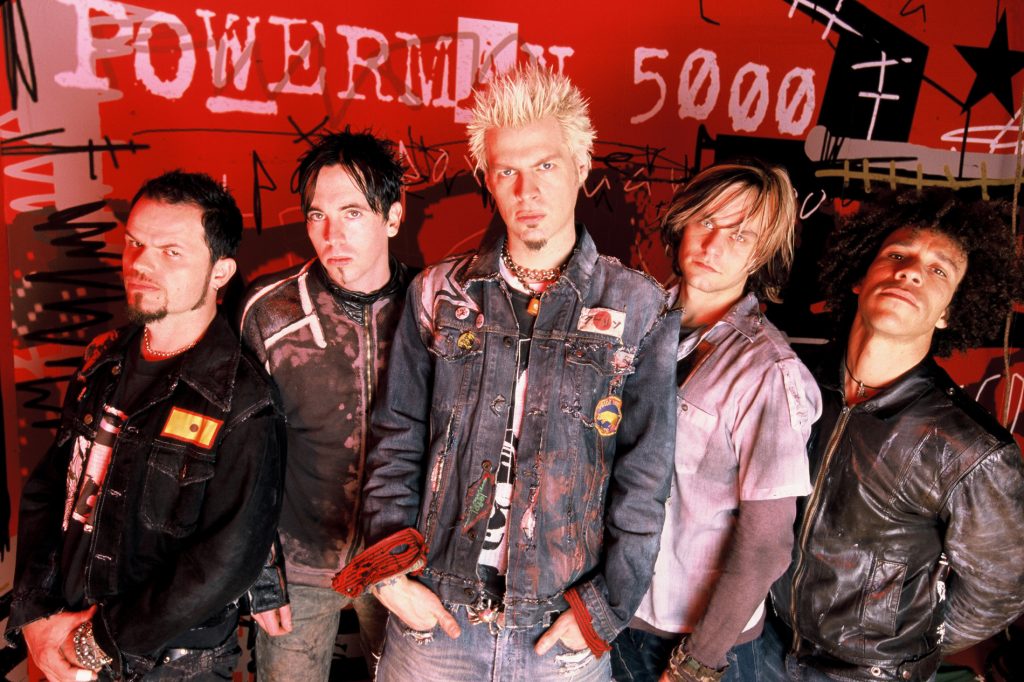 Break-time again, and I’m just kind of jumping in my shoes and so ready to see the next band, I can hardly wait to get back inside.  I have a Facebook and a Twitter and mainly just share music on Twitter but Facebook… I write on pretty frequently… I wrote about the sadness of likely missing the show, and then again about the excitment of it getting to work out and called them “Powermen” both times rather than tagging the band.  So you can imagine the enjoyment I got out of the *kick* I received when I saw them all come out wearing these seriously Bad A$$ *Powersuits*.  I thought the opening was a bit long, but ya know… antici…pay…tion… they say.

It really was totally kickin’ when they finally got started and their high energy lasted from the first second to the last and all the way through the encore.  My friend got a *Happy Birthday* wish, even though they got the name wrong… I know it was her… I was jumping like a jack rabbit with giant cartoon arrows and I had no other impulse… She’s so cool, I’m really glad these friends were able to join me but they didn’t really get into it like I did.  I dived right into the pool of their energy and I felt like my skin was buzzing with energy that crackled three inches into the air.  It was magical.  I jumped, I screamed and yelled, I danced…. I needed that so bad… They played some new stuff, some recognizable stuff, took a trip down memory lane and even through in some David Bowie.  I screamed for the encore, when you get something that good, you always want more.

We ended up heading out to the patio area after and I happened to see a few notable faces in the crowd that I hadn’t been aware of previously… and got invited to an after-hours after “party” that I think was also worth it but we didn’t get back till after five am, I haven’t done that in a while but it was almost hard to sleep.  I’m still wearing the bracelet from the show, they are quite durable.  It’s a nice way to reconnect to that experience though I probably won’t be wearing it for much longer.  I’ll do my best to get it off without breaking it, write down the date and the event and who I was with and stash it with the rest of them.  In the end, I have to say that they delivered a show worthy of every single wish I ever made to see them.