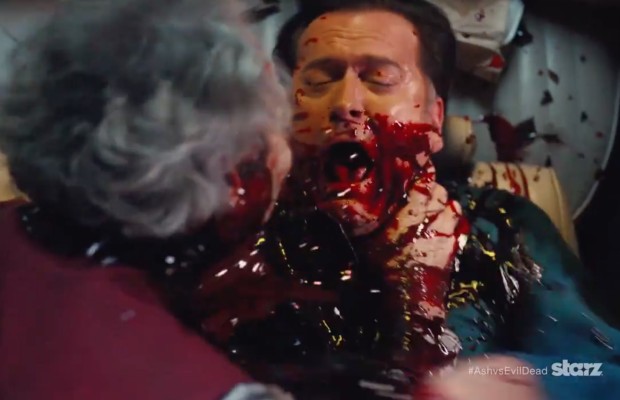 ‘Ash vs. Evil Dead‘ had such a perfect pilot episode, that it would be difficult to follow that up with something as good. Luckily for all of us rabid fans, the second episode titled ‘Bait‘ doesn’t lose any steam whatsoever and packs as much if not more blood, guts, and hilarious one-liners from Ash (Bruce Campbell) in this second episode. It’s no wonder that Starz has already given this series a second season. It’s that good.

After a a very brief recap of the 1st episode, ‘Bait‘ picks off literally one second after the first episode with Ash, Pablo (Ray Santiago), and Kelly (Dana Delorenzo) trying to figure out just what happened inside of Ash’s mobile home. Covered in blood, Ash needs to get to the bookstore to figure out if there is once again, a passage to stop the evil deadites, but as we saw in the first episode, Kelly wants to hit her parent’s home first to see if they’re okay, because she heard that her recently dead mother just turned back up at home very much alive.

This is where she takes off, leaving Ash and Pablo behind, which is okay with Ash, but not Pablo for obvious reasons. The two head to Kelly’s house as Ash plays the padawan to Pablo’s apprentice in teaching him how to defend himself, which is in itself endearing and hilarious. How many ways can you kill a deadite with a broken beer bottle? When the two show up, this little show turns into ‘My Dinner with Andre‘, but add a ton of blood and guts and chainsaws, which is of course, the perfect meal for ‘Ash vs. Evil Dead‘. 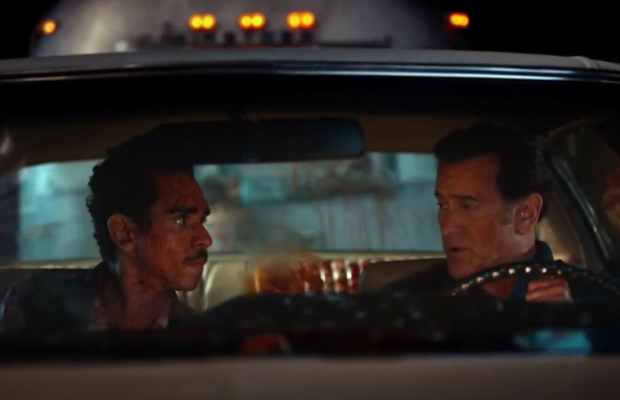 This is the focal point of the show really with Kelly and Pablo finally realizing that the “evil” can play tricks on you and make you think that your loved ones are peachy and happy, but in fact are soul eating deadites, which Ash shows his new friends in the best way possible. This second episode is still introducing us to both Pablo and Kelly, as we see how they react to evil as well as how they want to do the right thing in saving the people they love. We also get a sense that Ash is not the deadbeat drunk he appears to be most of the time too.

Meanwhile, the state trooper Amanda Fisher (Jill Marie Jones) is still trying to figure out what’s happening in her hometown, while her superiors are telling her to take it easy, because of the previous event, however, she now knows what Ash looks like and thinks he has something to do with what’s happening.

This second episode ‘Bait‘ is as much fun as the pilot episode in my opinion. It’s still fast paced, funny, thrilling, scary, and packs a ton of gore. You’re gonna enjoy this episode a lot. Plus, Mimi Rogers is in it.