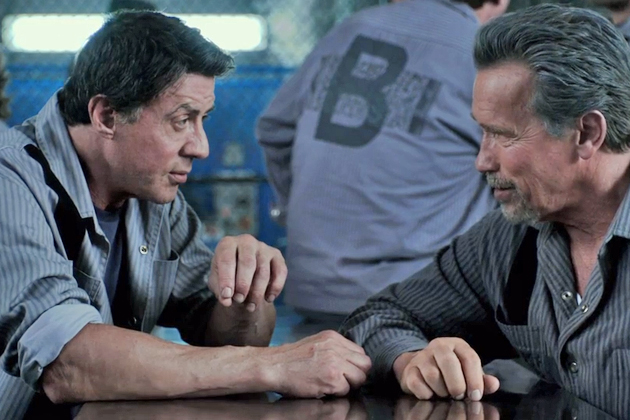 I counted six one liners in the Schwarzenegger/Stallone film ‘Escape Plan‘. I was hoping for more, and when it came to Schwarzenegger’s big moment to deliver the goods, they must’ve hired a three year old, because his one-liner was pretty lame, as is much of this action thriller that finally has the two biggest action stars of the 80s together at last for an entire movie. Now before we get into the good and bad of this film, let us first discuss the director, whose name is Mikael Hafstrom, who directed the John Cusack vehicle ‘1408‘. But more interestingly, Hafstrom wrote a movie called ‘Kopps‘, which you can see a brief snippet below (it’s required viewing to proceed with the review)….

I mean, it’s one of the best scenes in movie history, and this is what we are more or less dealing with in ‘Escape Plan‘, but less awesome. In what seems like reliving the glory days of the 80s action movies these iconic actors starred in, we follow Ray Breslin (Stallone), whose job is to be secretly arrested and put in the highest security prisons in America under a fake name, and attempt to escape, exposing the facilities weak points, so that the government can fix it. And he’s damn good at it too, his record is 14-0.

He wrote a book on his work and is one of the partners in a company that makes their money by doing this. His team that tracks his every move and makes sure he is safe doesn’t seem plausible or real, which include Amy Ryan, Curtis ’50 Cent’ Jackson, and Vincent D’Onofrio. These characters are lifeless and and could have been played by anyone. But when a strange young woman offers Ray and his company double their normal salary if he chooses to be incarcerated in a new beta prison system that is privately funded and completely off the grid. Well, he gets more than he bargained for, as he wakes is drugged, beaten and wakes up in this new prison. 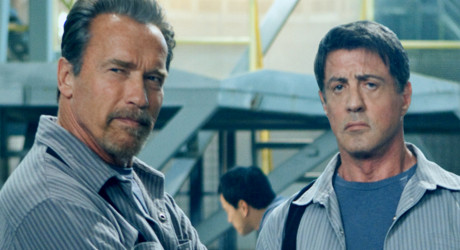 This prison is large and is full of multiple stories of glass boxes with masked guards always watching. This new prison is for the worst of the worst, where these awful criminals don’t stand trial and go simply to disappear. He soon enough meets Emil Rottmayer (Schwarzenegger), who takes an interest in Ray, as he notices him observing all of the guards routines and kinks – if any in the system. After a fight between the two action stars to which Schwarzenegger tells Stallone that he hits like a vegetarian, the two become pals and work together to escape, as it becomes clear that the Warden (Jim Caviezel), a sadistic man is working with someone close to Ray to keep in prison forever. With the warden’s right hand man (Vinnie Jones), who seemed to only sign up for guard duty to break some skulls, and a physician (Sam Neill), who is willing by fearful for his life to say or help anyone, it seems that Stallone and Schwarzenegger have their work cut out for them.

The movie drags on and on until we get to the final battle scene where get a famous Schwarzenegger slow motion sequence where he finds his friend – a big machine gun, and literally kills over one hundred guards in a matter of minutes. There are a few twists and turns here and all of them you can see coming from a mile away.

Sure, this is a fun and entertaining film to a certain degree. I mean, it has our two favorite action stars from the 80s in it finally kicking butt together. The characters are one note, the dialogue is awfully bad, and the pacing is at times rough, but that being said, it’s great to see these two older actors still kicking and taking names. For the other actors in the film besides Caviezel, surely only showed up for this to be in a film with these two action stars and nothing more.

I suggest a cocktail or three before watching this movie.