There’s Gonna Be a ‘Dodgeball’ Sequel!!! 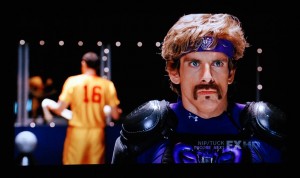 Patches O’Houlihan might just be back for a sequel (well in spirit anyway) of the Ben Stiller/Vince Vaughn film ‘Dodgeball: A True Underdog Story‘.  Fox and Stiller’s company Red Hour have brought on Clay Tarver to write a script for the sequel. I’m not surprised by this at all and can’t believe this didn’t happen sooner.

The first film came out in 2004 and made more than $114 million dollars and had an amazing supporting cast. Stiller and Vaughn have always talked about doing a sequel, but nothing was ever done to make it happen. That has changed today. This time around, the story is being written where Stiller and Vaughn’s characters will team up take on a larger threat. I enjoyed the first one enough to see a sequel, only if they get the other actos involved again.

Knowing these guys now, I’m sure to expect some big name cameos here. As for Tarver, he helped write the 2001 thriller ‘Joyride‘.

One thought on “There’s Gonna Be a ‘Dodgeball’ Sequel!!!”