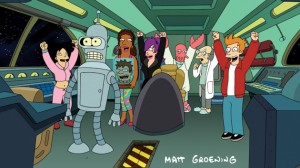 Bad news, everyone.  Comedy Central has decided not to renew ‘Futurama‘ and will have its last episode on September 4th.  The final 13 episodes will start airing on June 19th and will be the 2nd half of the 7th season.  This is unfortunate, as this Emmy winning series was amazing.  Yes, it had seven seasons, but how many times has this been cancelled? I know there is a huge fanbase for the show and is smarter than 95% of what people watch currently. I just don’t get it.

The series first aired from 1999-2003 with four complete seasons before it was cancelled on FOX. Then after Adult Swim through the Cartoon Network banner started airing reruns, it garnered more attention. So much in fact, that the cast and crew made four direct-to-DVD movies. Comedy Central picked up the slack and aired these movies in 30 minute increments and billed it as the 5th season in 2008-2009.

With the success of those movies, Comedy Central ordered a sixth season and seventh season, both of which consisted of 26 episodes each.  With the latter 13 episodes airing this summer. Producers and creators David X. COhen and Matt Groening were were not shocked as they have been cancelled before for this series. Cohen said, “I felt like we were already in the bonus round on these last couple of seasons, so I can’t say I was devastated by the news. It was what I had expected two years earlier. At this point I keep a suitcase by my office door so I can be cancelled at a moment’s notice.”

Comedy Central’s EVP of Programming Dave Bernath views the network’s decision as “the natural end” to the show’s improbable comeback. “That’s a helluva run that few shows achieve, and especially given the fact that it came back to life, it’s really an amazing story,” he says. “I’m more thankful and feel a sense of gratitude toward the whole process — and that we found a way to keep going for 52 more episodes — than I really am even thinking about the ending. It’s a blessing that it came back and lasted so long.”

Cohen calls the final run — which features such guests as Larry Bird, Sarah Silverman, George Takei, Adam West, Dan Castellaneta, and Burt Ward — “our best ‘last season ever’ ever,” noting that there are “a bunch of episodes that I think are going to be classics.” In one installment, Futurama is “reincarnated as various cartoons of your youth, not legally resembling but somehow quite reminiscent of Scooby-Doo, Strawberry Shortcake, and G.I. Joe,” he says. And the series finale, which features a wedding between Fry and Leela, is “a tasteful, emotional gorefest,” he raves. “There’s a lot of death but there’s also a lot of time travel, so that makes for an interesting combination.” Adds Groening: “It’s a really satisfying ending. It’s an epic ending. If indeed it’s the ending.”

If, indeed. Somehow we’ll see Bender shout “Bite My Shiny, Revived Metal Ass!” down the road, right? “Perhaps Futurama will return in another form, on the Internet, or as a puppet show in the park,” says Groening. “Or maybe as a puppet show in the park on the Internet.” Deadpans Cohen: “As I said three times before, this is definitely the absolute end of the show. I don’t know why nobody believes me when I say that.”

This was one of my favorite series of all time, and I’m sad to see it go.  Even though, there is some speculation that it might get picked up by another network, I’m sure the creators and cast are tired of going thru this cancellation process time and time again. It’s one of the few shows that got a second and even third chance. Maybe Netflix or Amazon will pick the show or up. Or hell, maybe someone will create a Kickstarter campaign and raise finds to make more movies or episodes of the series.

This is how I feel with this news.