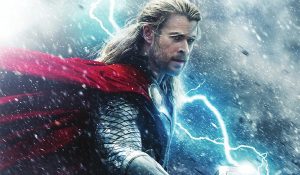 Here is the first trailer for the sequel to Marvel’s ‘Thor‘ titled ‘Thor: The Dark World‘. It seems like Marvel is going for an edgier and darker tone with this one. We’ve heard rumors this was the direction it was going, and after viewing the trailer, I can confirm that things get pretty gritty.  Alan Taylor is directing this 2nd installment and I have complete trust that he will do a fine job judging by his credits.

Taylor is a big name in the television world, working and directing mostly with HBO shows going back more than 10 years including ‘The Sopranos‘, ‘Six Feet Under‘, and the current ‘Game of Thrones‘. Taylor has also directed several episodes of AMC’s ‘Mad Men‘. So I fully expect a PG-13 ‘Thor‘ sequel in the vein of ‘Game of Thrones‘ now.