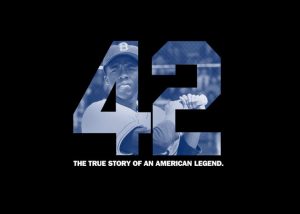 ‘42‘, which is the answer to the ultimate question in the universe, is also that historic and legendary uniform number held by Jackie Robinson, the first African-American to play major league baseball.  Brian Helgeland’s biopic film on Robinson tells a polished and engaging version of the baseball hero that changed the nation. With phenomenal performances from Chadwick Boseman as Robinson himself, both fans of baseball and Robinson, along with a younger crowd who has never heard of the baseball player will eat this film up. The box office will draw some decent money, even if the director tries to head us over the head with what we are supposed to be feeling.

We focus on the years 1945-1947 in ’42’ as we segue into last part of the film, which is Robinson’s first year as an actual major league baseball player. Similar to the 1950 ‘Jackie Robinson Story‘ (where Robinson played himself), one of the vital scenes is where Dodgers General Manager Branch Rickey (Harrison Ford) asks Robinson if he has what it takes to keep a cool head while his teammates, fans, and opposing teams harass him because of the color of his skin. And that is one of the main reasons Robinson was a hero. Not only did he impress everyone on the baseball field, but he showed great courage and restraint against his aggressors.

Rickey, maybe a man before his time, but certainly wanting to make a difference in the world socially and racially, hires Robinson to the Monteal Royals farm team, where we see Robinson taunted by his manager, teammates, going so far as to make him sleep separately from the team while on the road with a black family in town. But just like a good father, Rickey always says the right things at the right moments and has reminded Robinson to show his anger and voice on the field, rather than sink to the other’s levels.

On opening day in Jersey City, Robinson hits a powerful home-run to which his manager says, “He might be superhuman after all.” Now that piece of dialogue wasn’t necessary, but the film is riddled with instances like this. Rather than have the character’s actions tell the story on their own, there is always some piece of dialogue to punch in this face to tell us exactly what we need to feel. That is this film’s flaw, which isn’t a huge problem, but is annoying as it happens too often. 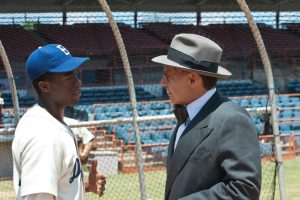 We do get a fair  share of the racism that was hurdled towards Robinson throughout the film as we see his own teammates signing petitions to not play with him and specifically an obnoxious manager named Ben Chapman (Alan Tudyk) who pitches the n-word and every other slang term at the ball player. However, all of these terrible moments for Robinson are almost immediately redeemed by some form of just punishment in the form of a victory or great play. On the other end of the spectrum, Robinson has a few supporters of integrating races in sports, such as manager Leo Durocher (Christopher Meloni) and a couple of colleagues, who all try to make it easier and help out Robinson.

With the use of some CG work, some of the baseball fields and stadiums looked amazing as if the cast and crew were really in the 40s making a baseball film.  The wardrobe and settings are spot on.  Harrison Ford does a good job as Rickey, however his character seems to only go one direction, which is the father figure who doles out good advice. It’s a good performance, but not much depth there. Tudyk and Meloni turn in great performances when they are on screen. And I was very happy to see John C. McGinley play Red Barber, the radio announcer. McGinley, mostly known as Dr. Cox on ‘Scrubs‘ does an amazing job of being very animated and a lot of fun. 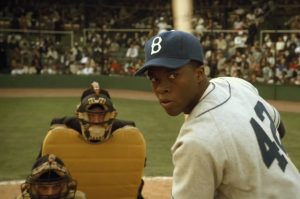 And Boseman shines as the celebrated Robinson. Not only is he a plausible athlete, but his charm and dramatic sense of keeping his anger at bay, shows off his acting chops, which he has plenty of. Since Robinson had really nobody to talk to about his difficult times during this period in his life other than his wife, I would have though that his spouse would have had a more prominent role in the film, but that’s not the case. I would have liked to see a bit more of their relationship, if only to see Robinson’s escape from all of the hatred.

‘42‘ is a very good movie and will definitely have an impact on and inspire many people, especially the younger crowd. Robinson’s story is a great one to tell, and here, it’s told with grace and class.  Even if Helgeland wanted to make a lighter film on such a sore and controversial subject, ‘42‘ is still a home-run.