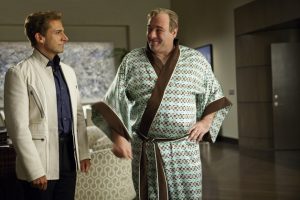 Steve Carell and James Gandolfini can’t seem to get enough of each other. Right of their project ‘The Incredible Burt Wonderstone‘, the two have paired up again for a new comedy. This time it will be on the small screen rather than the big screen. Both Carell and Gandolfini will produce and star in ‘Bone Wars‘ for HBO, which is currently in development.

This project is based on the real-life ‘Great Dinosaur Rush’ between Edward Drinker Cope and Othniel Charles Marsh, both who work at larger than life museums os science and history. It’s set during the post Civil War birth of American science and is a comedy about the will documented feud between the two men and the great dinosaur fossil race that lasted many years and uncovered more than 160 dinosaurs. Gandolfini will play Marsh and Carell will play Cope.

Right now, HBO is looking for a writer. This sounds like a lot of fun and a great project for HBO, which will have ‘Sopranos‘ star Gandolfini back at HBO. Carell is currently filming ‘Anchorman 2‘ as Gandolfini is filming ‘Animal Rescue‘. However, i give the project till the end of summer to be fully written and start production.  I don’t think this will be a straight out silly comedy, but rather a sophisticated comedy, which will suite both actors very well.