‘The Walking Dead’ Has a New Showrunner!!! 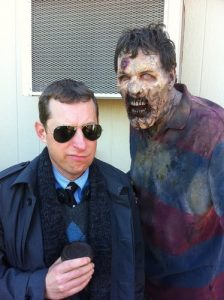 Well, ‘Walking Dead‘ fans, it looks like there is some shuffling going on with the executive producers of the show. AMC is now confirming that former supervising producer Scott Gimple will now be executive producer and will be joined by Greg Nicotero and Tom Luse. Nicotero was the Emmy award winning Special Effects Makeup Supervisor and Luse was a producer.

‘The Walking Dead‘ will start filming on May 6th in Atlanta for their new season. AMC gave the normal speech about how wonderful the men are and how great they will do in their new roles.  Gimple  has been around since season two and wrote “Hounded” and “Pretty Much Dead Already” amongst others. Luse has been around since the beginning. With both of these guys being veterans of the show, I really think this could potentially boost the show into another stratosphere of great TV. I’m looking forward to see what happens.