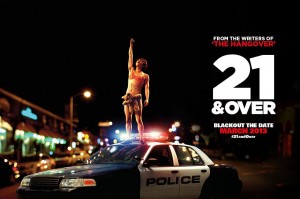 A lot of fun is to be had with ‘21 and Over‘ if you know what you’re getting into. Sure, you’ll hear from many people that it mimics ‘The Hangover‘, possibly to a tee, but in my opinion, I think this entertaining and hilarious movie stand on its own. ‘The Hangover‘ scribes Scott Moore and Jon Lucas get behind the director’s chair together for their first time with this comedy and they prove they have as much skill as Todd Phillips when telling a college tale about drinking and debauchery.

We first me Miller (Miles Teller), who is a fast talking wise-ass who is on his way to one of his high-school best friend’s college campus, in order to celebrate his friend’s 21st birthday. He is joined by his other best friend Casey (Skylar Astin), who is on a path to be a successful square on Wall-Street. The birthday boy in question is Jeff Chang (Justin Chon), who on the exterior seems like a very bright, enthusiastic, and responsible student. However, he lives with a constant stress of his demanding father (Francois Chau) puts on him, but making him study 24 hours a day in order to become a doctor, and in fact has not had a quality social life in college, in order to please his father. 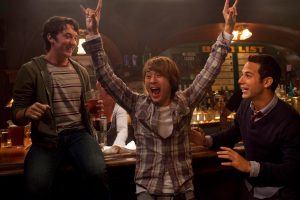 Chang tells his friends that he has the interview of his life the next morning and that he cannot celebrate turning 21 with his friends who have travelled to see him, however with a little arm pulling and an air horn, the epic and disasterous night begins. It starts out normal enough, as they’re all out at the local bar doing shot after shot, when a rogue dart pierces an angry guy in the face. The trio leave as Chang is getting more hammered until the point where he cannot walk on his own and basically becomes unconscicous for the remainder of the film with brief flashes of his coming to and drinking more.

The mission is to get Jeff Chang home before his father picks him up first thing in the morning for his interview. Only thing is, Miller and Casey don’t remember where Chang lives. From breaking in to sorority houses to a stampeding buffalo, to a multi level drinking contest, the three guys are constantly getting into trouble and avoiding death. And if you’ve seen ‘The Hangover’ or ‘Old School’, you can figure out how the rest of the plot goes.

I think this particular raunchy comedy stands with the best of them, because of it’s three main leads.  They are all likable in some way or another and in the end, it’s about trie friendship, and what friends would do for another friend. Chon really stands out when he is coherent, as I’d love to see him do more comedy.  He was so funny playing that one friend who has had too much to drink. His physical comedy was amazing.

‘21 and Over‘ is silly and stupid, but tons of fun and is chock full of laughs, nudity, alcohol and a lot of heart, even with its cliché scenes. I’m sure this won’t get as much attention as the films I mentioned above, mostly due to the lack of big name actors, but I’d like to think that this is the younger brother of those iconic movies, who is going to grow into something bigger with a set-up sequel.