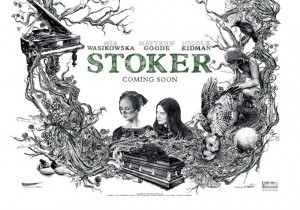 Since 2003, Park Chan-wook has been one of my favorite directors of cinema, as I saw his film ‘Oldboy‘. I was in complete awe of that movie and immediately had to find out what else he had done. Upon some research, I ended up buying ‘Sympathy for Mr. Vengenace‘ and loved that flick. Since then I have tried to see everything he has made including ‘Lady Vengeance‘ and his vampire film, ‘Thirst‘. Now, all of these films have been made in Korea with English subtitles, but Park now has made his first North American film title ‘Stoker‘, and proves the prolific director still has what it takes to be at the top of his trade.

I have no doubt that you will leave the theater creeped out, puzzled, and possibly terrified after watching ‘Stoker‘ as Park has created a very suspenseful and incredibly eerie feel to this blood splattered thriller. I also did not know what to expect from the film as it was written by Wentworth Miller, the lead guy in the hit TV series ‘Prison Break‘. No need to worry, as with Park’s eye and Miller’s writing, this golden piece of cinema will resonate for years to come. 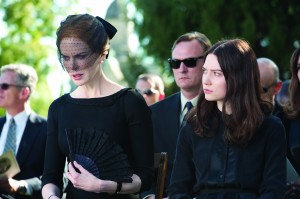 The story centers on a teenage girl named India (Mia Wasikowski) who seems to enjoy other-worldly endeavors than the usual teenager. Her father (Dermot Mulroney) unexpectedly dies leaving her and her mother Evelyn (Nicole Kidman) alone in a big house. At the funeral service, she meets her uncle Charlie (Matthew Goode), which she has never known about, who has been traveling and working abroad for many years.

As the day goes long, Charlie’s attitude and mannerisms become very unsettling, and the tension between him and Evelyn is so thick, that you can pour it over pancakes. India knows something isn’t right. Charlie then decides to stay in the house for a while, when their Aunt Gwendolyn comes over for dinner and tries to warn India and Evelyn about where and what Charlie really is. Needless to say, that is her last time on screen. From here we learn more and more about Charlie as we see India take a liking to him, although there are some very evil dark secrets buried with this family that shouldn’t be let out.

Miller took his cues and borrowed heavily from Alfred Hithcock’s 1943 film ‘Shadow of a Doubt‘, which has the same characters and the beginning of the plotline for ‘Stoker‘. And I hear that Miller is already writing a prequel to the film already. His screenplay is pretty good, but where the gaps are, Park takes over with his unusual and astounding visual style as we are constantly on edge and walking on egg shells. Sound effects are heightened for even the most minute noises, which made me squirm and sweat.

The acting is exceptional all around here. Kidman does an amazing job as a mother who would rather shop than take care of her kid, and Goode might just win an award for playing the creepiest guy on film. His performance and the way he looks and acts around India is truly unsettling. And Wasikowski is the headline here as she plays an off-beat teenager with a sinister urge to perfection, but never really letting us know which way she wants to go. Does she want become a warrior or does she want to become the monster?  ‘Stoker‘ will leave you disturbed for days, but leave you coming back for more.