Check Out The First 10 Films Announced for the 2013 Dallas International Film Festival!!! 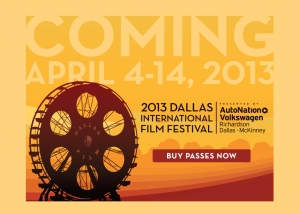 Official Press Release: The Dallas Film Society announced today the first 10 films chosen to screen at the 7th edition of the Dallas International Film Festival, presented by AutoNation Volkswagen Dealers on April 4 – 14, 2013. Overall, approximately 180 films from all over the world will be screened during the 11-day Festival. These first 10 films not only represent works from America, and Texas in particular, but also films from the United Kingdom, Canada, Africa and France — truly an international offering.

Set in Texas, BUCK WILD follows four friends whose hunting trip goes horribly, gruesomely awry after they accidentally shoot the deer lease’s owner. While covering their tracks, the boys get into even more of a mess that includes conniving cops, eccentric New York gang bangers, a seductress named Candy and a growing plague of zombies.

After years of being picked on at school, best friends Matt and Owen decide to make a revenge fantasy movie about their bullies. But what starts out as a funny and creative way to cope with their daily abuse starts to become an actual plan for Matt who wants to make their lighthearted fiction into a violent reality.

GOD LOVES UGANDA reveals how various pastors and politicians, both in the US and abroad, are trying to convert Ugandans to fundamentalist Christianity, complete with anti-gay views and policies. With so much of Uganda’s population under the age of 15, these influential powers are preaching to vulnerable minds with violent consequences. This film gives an enthralling look at a movement that is both a threat to human rights and a contradiction to the Christian message of love thy neighbor.

JUMP follows the intersecting lives of four very different twenty-somethings as fate brings them together on New Year’s Eve. United by their connection to a crime boss and the disappearance of an innocent man, Greta, Pearse, Johnny and Marie are dangling on the edge of legality and redemption, and their actions will have consequences for them all.

MUD is an adventure about two boys, Ellis and his friend Neckbone, who find a man named Mud hiding out on an island in the Mississippi. MUD describes fantastic scenarios—he killed a man in Texas and vengeful bounty hunters are coming to get him. He says he is planning to meet and escape with the love of his life, Juniper, who is waiting for him in town. Skeptical but intrigued, Ellis and Neckbone agree to help him. It isn’t long until Mud’s visions come true and their small town is besieged by a beautiful girl with a line of bounty hunters in tow.

Filmed and set in Texas, PIT STOP paints a portrait of multiple lovers recovering from loss. After an affair with a married man, Gabe finds solace in the enduring love of his daughter and ex-wife, while on the other side of town, Ernesto spends his free time in the hospital caring for a past love trapped in a coma. This subtle and moving film captures the enduring hope of people temporarily stalled on the highway of life.

Set in the French Riviera during the summer of 1915, RENOIR paints a portrait of the last years in the life of famous impressionist Pierre-Auguste Renoir. When the artist’s son Jean returns home after being wounded in World War I, he finds his father has a new muse, Andree. Her vibrant presence breathes new life into both men.

In RISING FROM THE ASHES, cycling legend Jock Boyer moves to Rwanda to help a rag tag group of cyclists pursue their dream of representing their country at the 2012 Olympics. Coached by the first American to ride in the Tour de France, the aspiring athletes are also survivors of the 1994 Rwandan genocide. Narrated by Forest Whitaker, this moving documentary shows how hope breaks away from sorrow.

Begun in California in the early 1980s, competitive cup stacking is a lesser-known but growing sport. In STACKER, director Jeremi Mattern documents the fast-paced lives of young athletes as they train for and compete in the annual World Sport Stacking Championships in Denver, Colorado, with more than 300 competitors from across the globe battling it out in lightning-quick rounds with the odds quite literally stacked against them.

We’ve all clicked “Agree” on a website or smartphone app without reading the way-too-wordy extended policy. But have you wondered what exactly you’re agreeing to? The documentary TERMS AND CONDITIONS MAY APPLY ventures into the fascinating and frightening rabbit hole of high-tech communications and privacy policies and will live you wondering if there is such a thing as a private life online.

DIFF passes are now on sale at the online Prekindle box office at www.DallasFilm.org and range from $100 for a Festival Lounge Pass to $750 for an all-access Star Pass, which includes:

Starting March 14, individual tickets and passes can be purchased at the Prekindle Main Box Office in Mockingbird station, and online at www.DallasFilm.org.