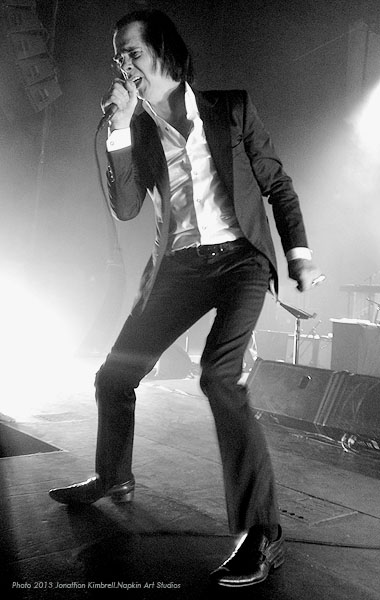 Alright, so I realize I’m a few days behind on talking about the Nick Cave and The Bad Seeds show from March 14th, but hell, I’m still reeling from how awesome the experience was. Needed a few extra days to process it all.

As anticipated, Australia’s dark and lovely darlings, Nick Cave and The Bad Seeds, hit up SMU’s McFarlin Auditorium in support of their 15th album release, Push The Sky Away, with guns, fists and instruments blazing, like it was a real gunfight at the OK Coral. No eardrum or blackened soul was spared during the two hour set.

The show managed to hit several firsts for me. One) It was the first time seeing the boys in person. Having only been a fan for a few years, I’m still getting acquainted with much of their catalog. Two) This was the first time I actually wore ear plugs during a show, and lemme tell you, I’m glad I did. This band doesn’t skimp out on amplification. Three) I’ve been fortunate enough to sit pretty close to the stage for shows in the past, but this was the first time like I felt as though I could pick-pocket a band member’s wallet during the show. It turned out to be one of those rare moments where I felt pretty lucky to be in attendance in all aspects.

Geek factor aside, the show was amazing. These seasoned vets seemed to still be finding their comfort level on stage (Dallas was pretty early on the list of tour stops this year), and with some sound and mic problems from time to time, the band still delivered and gave the fans their monies worth. Cave, who could be characterized as an ingenue of the well-seasoned Mick Jagger for stage presence, played the crowd mostly at the foot of the stage, while The Bad Seeds set the tone for the night draped in quiet blues and loud reds.

It’s always refreshing to see the band, especially a frontman, to be really engaged with their fans. Not five minutes into the set, Cave pretty much told security to ‘fuck off’ and let the fans stand up and make their way toward the stage, to do ‘whatever.’ Like the gentle lambs to the slaughter, goth and geek alike flooded to the foot of the stage to be serenaded by Cave’s devilish croon, iPhones affixed to their sweaty hands.

The Bad Seeds delivered a good mix of hits and rare classics, such as “Higgs Boson Blues”, “Papa Won’t Leave You Henry”, “The Weeping Song”, “The Mercy Seat”, “Red Right Hand” and “Stagger Lee” (see film clips below). It was interesting and somewhat strange to see there wasn’t much in the way of the new songs from Push The Sky Away, and even more interesting to see Cave’s stack of lyric cheat sheets next to the piano. I suppose with nearly thirty years or so worth on material to pick from, you’re bound to forget a lyric or two.

Though there was an interesting mix of fans and awkward spectators who came to see Cave and his band preach to the masses, I was pleasantly surprised the awkwardness of a few specific fans at the front of the stage didn’t ruin the experience for me. (Their vibes were pretty intense, though no match for Cave and his well-honed prowess.) Cave seems to be quite adoring of his fans, no matter how straight-laced or bizarre they may be. Hell, most of us had our phones glued to our hands most of the evening, filming and photographing every second and square inch of the show when we could. I know I did. The band didn’t seemed to mind that much. And because of that, I got proof on just how awesome the show was. Nick Cave and The Bad Seeds…another one off my bucket list.

Remainder of dates for The Bad Seeds 2013 Tour: