There’s Going to Be A ‘Hot Tub Time Machine’ Sequel!!! 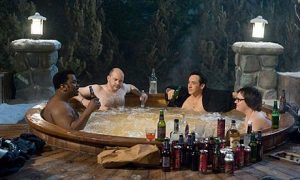 I’m pretty excited about this.  I thought the first film was very funny. MGM must have thought the same thing as they are planning the sequel as we speak to the 2010 original.  Right now the project is in the talking stages, meaning the studio is having discussions with Rob Corddry, Craig Robinson, and Clark Duke to reprise their roles. At this moment, John Cusack is not involved with the project.

I imagine they are trying to pitch a storyline to them and see if they want to come back, because if they don’t, why make a sequel, or it will mean they will have to re-write a script with new people, which I don’t think could work. According to THR, Steve Pink (the director of the original) might just enlist the help of Corddy to write the new screenplay and is also being courted get abck in the director’s chair again.

The first film had a budget of around $36 million dollars and ended up making over $50 million at the box office.  Not too shabby for an R rated film called ‘Hot Tub Time Machine‘, but in addition to that, it made a killing on blu-ray and DVD. Like I said above, this project is stil in the very early stages of talks, which could go either way, but if all of the deals fall into place, this one could be fast tracked to come out by next year.

I would love to see a sequel to this film, just as long as the original cast and crew return.  Your thoughts?