Mike Birbiglia Kills It In Dallas at the Winspear Opera House!! 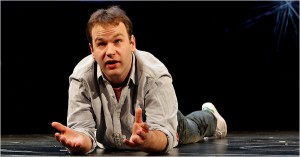 I have been a fan of Birbiglia’s for a while now.  I loved his spots and stories on NPR’s ‘This American Life‘ where he talked about his comedy and his rare sleep disorder, which causes him to physically act out his dreams. And I loved his recent film ‘Sleepwalk With Me‘, which is based on a segment of his life, particularly his college girlfriend and his entrance to the comedy world. Seeing Birbiglia live was not only one of the funniest and most entertaining shows I’ve seen (and I’ve seen the some of the greats; Carlin, Chappelle, Saget, Dunham, Louis C.K.), it’s an incredible experience, full of laughs, awkward memories, and romance.  I wish I could buy a ticket for every person on Earth to see Mike Birbiglia live.

When I heard that Birbiglia was making his way to Dallas, I did not expect him to play at the luxurious Winspear Opera House.  I thought he’d play more to a House of Blues crowd, but was I wrong.  The Winspear was the perfect place for his one man comedy show titled ‘My Girlfriend’s Boyfriend‘ this past Saturday evening. He started out with a bit of stand-up as he asked where people were as he noticed two empty seats in the front row.  He then took to his personal phone and looked up some people sending him tweets from the day, which made the audience laugh uproariously. He then proceeded to tell us that the last time he was in Texas, the state didn’t treat him to kindly and he developed a dis-liking of the state, to which one of his fans tweeted “Instead of saying Texas, say Oklahoma, which got a huge gut-busting laugh and applause.

After a few minutes of that, it was time to start his show, which pretty much takes place after the events of his college girlfriend break-up as seen in ‘Sleepwalk with Me’. Not only is Birbiglia a hilarious comedian, but he is a master storyteller and writer.  He takes on his journey through his first kiss, his uneasy high-school years, a couple of his girlfriends, and how he came to marry his wife Jenny.  His story spans many years and many instances, all which we can relate to, or at least most of the time.  I’ll tell you this, I’ve never had a girlfriend who turns out was seeing another guy at the same time who wanted to all hang out together at the other boyfriend’s parent’s house.  It was a riot. 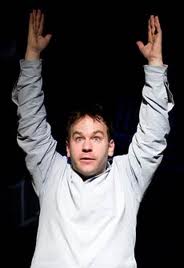 Birbiglia has a unique and effective way of making the audience melt in the palm of his hand and keeping all of us interested for the duration of his show.  It’s not the usual set up and punch line or comedy bit routine, but rather a slow build up of endearing and all to real stories we all have been through at some point in time from getting sick on a carnival ride, to a car wreck, to making out in high-school, to masturbating in a car.  I laughed so hard and so much, I thought my cheeks were going to fall off.

He had the audience so entranced with his story, that at times when he spoke softly, you could literally hear a pin drop and roll down to the stage.  Mike Birbiglia’s ‘My Girlfriend’s Boyfriend receives my highest recommendation.  This is a must see.  I haven’t laughed this hard in a long time and cannot wait for him to come back through.