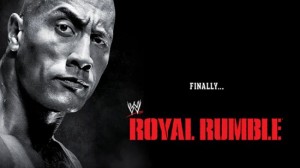 The Rock is the new WWE Champion, and this guy and I are pissed off about it – CLICK HERE TO SEE HOW PISSED OFF WE ARE!!

Yes, The Rock was my favorite WWE performer in wrestling’s heyday at the turn of the millennium. But in 2003, Dwayne Johnson left WWE to become the thinking man’s Vin Diesel. He used his success as a WWE Superstar to springboard into movies, and that’s great. But CM Punk doesn’t want to springboard anywhere. CM Punk wouldn’t trade the WWE Championship for a featured role in the Fast and Furious franchise, and no one looks at CM Punk and thinks “Oh yeah, the strong man’s William H. Macy.”

On Sunday morning a friend said that there was no way The Rock would win the title because he wouldn’t want to appear on television every week. For those of us that care about the WWE product, that condescension stings. It implies that the WWE Championship is beneath The Rock; that he can just drop in after 9 months off, win the title, and then show up when he wants because we as wrestling fans should just take what we can get. 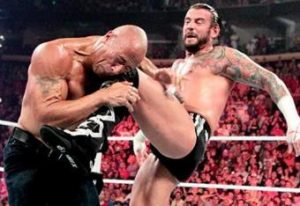 And does it really build the brand to allow The Rock to steamroll a guy who held the title for 434 days only to leave after Wrestlemania? I don’t think it does. I will therefore pay the WWE $54.95 to watch February’s “Elimination Chamber” pay-per-view under protest.

The Royal Rumble had some good times too. Here are my thoughts on the two other marquee matches, the World Heavyweight Championship match and the Royal Rumble itself.

Alberto’s opponent, the Big Show, would have been the greatest wrestling attraction of all-time had he been born 20 years earlier. If fans only saw the Big Show once a year, it would be a huge deal for the local hero to beat him. Instead, he’s on television every week losing to every hero that WWE tries to create, in increasingly humiliating ways.  Last night’s humiliation came when Ricardo Rodriguez (Alberto’s personal ring announcer) used a roll of duct tape to tie Big Show’s feet to the bottom rope, thus incapacitating him for the necessary ten-count and allowing Alberto to retain the championship. Big win for Mexican ingenuity, big loss for overactive thyroids. 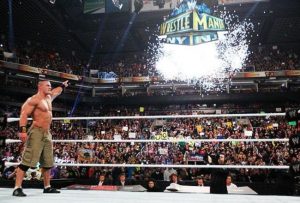 Since the Royal Rumble is a 60 minute smorgasbord of chaos that really doesn’t contain a coherent narrative, here are some quick thoughts:

– The Royal Rumble is billed as a random draw, but the guy who draws number 2 always has some karmic connection to whoever drew number 1. This delights me every year, but a returning Chris Jericho (#2) coming back to confront Dolph Ziggler (#1) after Ziggler ended his career in August was especially rich.

– Speaking of Ziggler, congratulations to Alfonso Ribiero for revitalizing his career as Dolph Ziggler’s body guard, Big E. Langston. I just hope the ensuing steroids scandal doesn’t send him back to a dark place.

– The most believable brother vs. brother feud in wrestling history finally got going when Cody Rhodes eliminated his brother Goldust. Goldust looks like his dad, Dusty Rhodes (punch that into a Google image search and come back), and rose to wrestling prominence playing a flamboyant gay character in a gold onesie. Cody Rhodes looks like he strolled in straight from the beach volleyball scene in “Top Gun” and his character can best be described as “good looking guy with a mustache.” If I’m Goldust and my brother is Cody Rhodes, I probably want to fight him. And if he eliminates me from the Royal Rumble? Well, the only acceptable place to settle that insult would be Wrestlemania.

– John Cena eliminated Ryback to win the Royal Rumble. This made me happy because I’m pretty sure the Ryback character is Republican propaganda intended to undermine Michelle Obama’s Let’s Move!” campaign. The guy just repeats “Feed Me More!” and Middle America cheers, totally disregarding the consequences of overeating and unhealthy dietary habits. I’m on Team Michelle.