Film Review: ‘Bullet to the Head’! 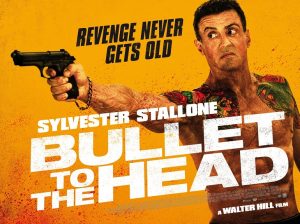 Sylvester Stallone and director Walter Hill abandon their walking canes to make one brutal action film set in New Orleans called ‘Bullet to the Head‘, even though it’s silly, brainless, and laughable. This action flick packs a hard punch, but fails in story, character, acting, and dialogue.  But what do you expect from two guys who are around 70 years of age, who are making and starring in films that involve a climax with battle axes.

Walter Hill is known for his films from the 80s, such as ‘48 Hours‘, ‘Another 48 Hours‘, ‘Red Heat‘, and ‘The Warriors‘. I guess you can say that this is Hill’s re-imagining of ‘48 Hours‘ minus Nolte and Murphy, as the film focuses on not a buddy cop film, but rather a henchman/cop buddy film where one part of the duo is the older and wiser guy, and the other is a young rookie type who learns from the “master”, complete with ethnic jokes and animosity. 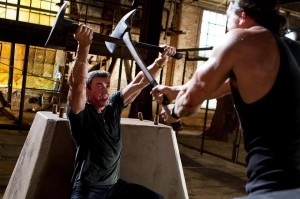 You know you’re in for a B-Movie ride as soon as the opening credits and logos start as a large bullet comes flying through each credit and logo at the audience.  We center on Jimmy Bobo (Stallone), an assassin for hire who has seen every scenario and been around the block more than a dozen times, but can still take on several enemies at once with ease. Bobo and his partner Louis (Jon Seda) are on a job for hire to kill their subject, as they do, but soon after, they figure out they were set up and Louis is stabbed repeatedly by a large and menacing mercenary for hire known as Keegan (Jason Mamoa from ‘Game of Thrones‘). Now Bobo wants revenge and ends up pairing up with out-of-town police detective Taylor Kwan (Sung Kang), who is in town to investigate a murder of his former police partner, which just happens to be the same guy Bobo and Louis killed earlier.

After a few clues here and there, and a few brutal beat downs and deaths, we find out that this murder conspiracy set-up goes all the way to the top politically and socially with big pay-offs and secret bank accounts. You can pretty much see where it goes from here.  There are a lot of shoot outs,fights, car chases, which all lead to an abandoned factory where the climax of the flick takes a turn with not only tons of bullets, but two very large battle axes. It was quite the spectacle for sure.

Stallone still proves he can tussle with the young action stars and still sells his epic punches. Every punch and kick, every head smashed in, and every gun shot was extremely loud and impressive. It’s as if the sound engineers knew that this film was terrible and decided to turn the sound effects to 11.  I mean, I felt every hit and every shot fired as if it were happening to me.  That’s how intense the sound is and is quite possibly the best part of the film. 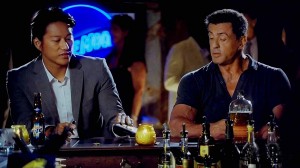 As for the acting, it’s some of the worst I’ve seen for a while now. Stallone’s face shows no expression whatsoever, it’s as if he’s a wax stand in that talks. As for Kang, I’ve seen him do decent work, but here, he just phones it in completely. What a let-down.  The only decent actor among the bunch was an over-the-top Christian Slater who plays a slime ball and has some funny dialogue.  Mamoa is good, but he rarely speaks.  And the dialogue is so bad, it’s good, with every line that made myself and the audience laugh out loud, especially with lines like “You had me at f*ck you.” It’s cringe worthy.

The fight choreography is pretty good with some powerful martial arts moves and high flying stunts at times with some fun weapons.  By no means is this a quality film.  Yes it will keep your attention, and yes it most likely entertain you to the point of laughter, but I don’t think that was ‘Bullet to the Head’s‘ intention. I think they were trying to make a gritty, violent action crime film with a hint of comedic dialogue, but instead it came across as a foolish, unintelligent, silly buddy cop film with some decent fighting.  So yes it’s entertaining to a degree, but not worth the time on the big-screen.  And whoever’s decision it was to have Stallone narrate the entire length of the movie, should not be able to make decisions anymore. You just can’t understand what they guy says anymore.