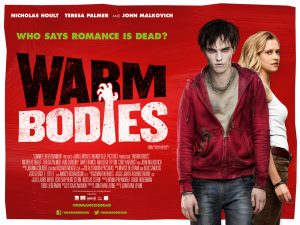 Jonathan Levine’s adaptation of Isaac Marion’s ‘Warm Bodies‘ focuses more on an undead romance than any political or social issues, with having just enough blood and guts for genre fans.  I have to say that this zombie flick ranks right up there with some of the best living dead films ever made.  It’s original, fresh, and has an amazing soundtrack.  I have no doubt that this lovable zombie movie will make tons of money at the box office.

Director Jonathan Levine has taken up the horror genre from his recent efforts in ‘The Wackness‘ and ‘50/50‘ to give us a coming of age story set in a dystopian world conceived by writer Isaac Marion, whose book of the same name was published only a couple of year ago. I have not read the book yet, but if it’s anything like the film, I’m sure I’ll love it. This love story starts out in the very near future where we see a post-apocalyptic world where most people are no the undead, who spend their time wandering around looking for still-live humans to feed on their brains, guts, and organs.

Among the millions and millions of zombies is R (Nicholas Hoult). He goes by R, because he can’t remember his name as we hear him narrate throughout the entire film. R also cannot remember anything about his former life before the big zombie apocalypse, other than that it happened and what might have caused it.  During an afternoon, R and several other zombies are out looking for humans when they stumble upon a group of survivors salvaging a pharmacy for medicine.  Durring the attack R is captivated by Julie (Teresa Palmer), who is very much alive and who is killing the zombie attackers. In an effort to dodge her bullets, R attacks Perry (Dave Franco), Julie’s boyfriend and brutally kills and eats him. 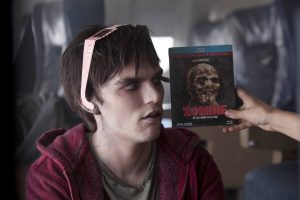 However, it’s love at first sight with R, and decides to spare Julie being eaten by himself or any of the other zombies, and escorts her to safety to his home, an airplane at an airport that he has converted into a makeshift home complete with a collection of records and a record player that he operates. At first, Julie is very scared as R only blankly stares at her and groans.  But after a little while, she seems to notice he is different and that he is trying to communicate with her, even learning to slowly speak again.

It’s here where we find out why zombies eat people, especially their brains, as it not only gives the undead their daily fill of vitamins, but also gives them access to their victim’s memories, thus making the deadites feel a bit more alive and human. However, Julie knows she can’t stay in the airplane with R forever, as she must get back home, which is a section of the city that has been blocked off by giant 100 foot cement walls and is led by her widowed dad, Grigio (John Malkovich), who at one time might have been a decent guy, but is now in charge of the safety of a lot of people and in charge of the make-shift military, and who rarely has time for his daughter.

As Julie starts to make her way back home, R realizes that he is transforming into a human again and that there maybe a cure.  So , R must tell Julie so that her dad and his army will stop killing the zombies.  However, there is a larger threat that equally effects the humans and zombies.  They are called boneys, which are a sort of mutation when humans turn to zombies and are undead for a long period of time.  These boneys are mostly skeleton-like and have no brain function what so ever, other than eating anything they can find. It’s up to R and Julie to let the rest of the world know their secret. 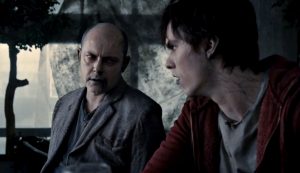 The story plays out perfectly with no lags in the script or characters.  Everything is on pace and brilliantly told. Their is also quite a bit of comedy here, not only from the situations of teenage love and how awkward that can be, but by one of R’s zombie friends, who is hilariously played by Rob Corddry. Also, ‘Warm Bodies’ is completely aware of itself and how silly at times it can be, which makes this undead comedy shine above the rest.

Nicholas Hoult does a fantastic job as R as he flawlessly showcases his zombie-like body language and his undying wish to be alive again.  Hoult rose to fame as the main kid from ‘About A Boy‘ starring Hugh Grant.  Hoult does not have the English accent here and he sounds great when actually is verbal. He’s very charismatic as Malkovich and Palmer also turn in solid performances. There isn’t ons of gore in this, as it tends to stray away from the blood and guts aspect and focus on the relationship between Julie and R, but there are bits of brains and its of blood here and there to please any gore fan out there.

With a killer soundtrack composed of artists ranging from Bruce Springsteen to Roy Orbison to Bob Dylan to Guns N Roses, the older crowd will laugh and love the music used here, even with its cheesy placements, but like I said, the film is fully aware of itself, so you’ll be pleasantly happy with it. ‘Warm Bodies‘ is a great addition to the zombie genre and stands out from the rest fresh love story and great and likable characters. I have no doubt that once you leave the theater after watching this, you’ll be dying to see it again.