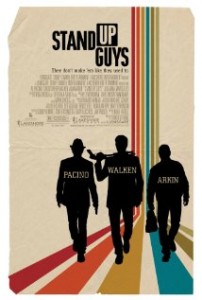 Have you ever wondered what happens to old mobsters that don’t become “The Don?”  If you have, then watch ‘Stand Up Guys‘ to find out.  Al Pacino, Christopher Walken, and Alan Arkin play three old wise guys who are reunited for one last night of glory.

Although presented as a comedy about aging mobsters, ‘Stand Up Guys‘ is surprisingly much less of ‘The Crew‘ (if you don’t know what movie that is, don’t worry, you’re not missing much) and much more of the ‘Bucket List‘, except, you know, with mobsters.

Pacino recently gets out of a 28 year old stint in prison and reconnects with his old rompin’ head stompin’ buddy Walken.  Unbeknownst to him, and quickly beknowst to the audience, Walken has actually been assigned Pacino as a hit.  The only problem is, the two characters care about each other, even after such time apart.  The crux of the film is watching how this friendship between two men, although kept apart for many years by the legal system, still holds is strength. 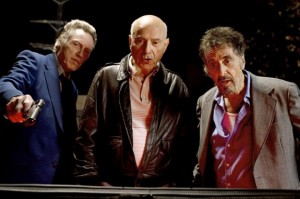 The two men quickly return to their quasi-gangster ways, and yes, much of the film is filled with endearing moments watching the two harmless looking men do some straight up ‘Sopranos‘ style antics, which does include guns, women, baseball bats, lock picks, and springin’ another old guy (Arkin) out of lockup, except instead of prison, it’s a retirement home.

While all this might sound superficially ridiculous, it’s a surprisingly sweet and tender film.  This is primarily due to somewhat downplayed yet still heartwarming performances of the three protagonists who deliver their lines a little slowly, their voices strained with the sound of nostalgia, but not without a few obligatory scene stealing lines.  The film gives us a glimpse of their past, but mostly, it hits us in the face with a hard look at the aging process, regret, and loss that all men must come to terms with in our later years.

Though you never woulda guessed it, you could expect a couple of tears while watching this film, and though you may leave feeling a little conflicted, you just might feel like hugging an older relative when you walk out of the theater.